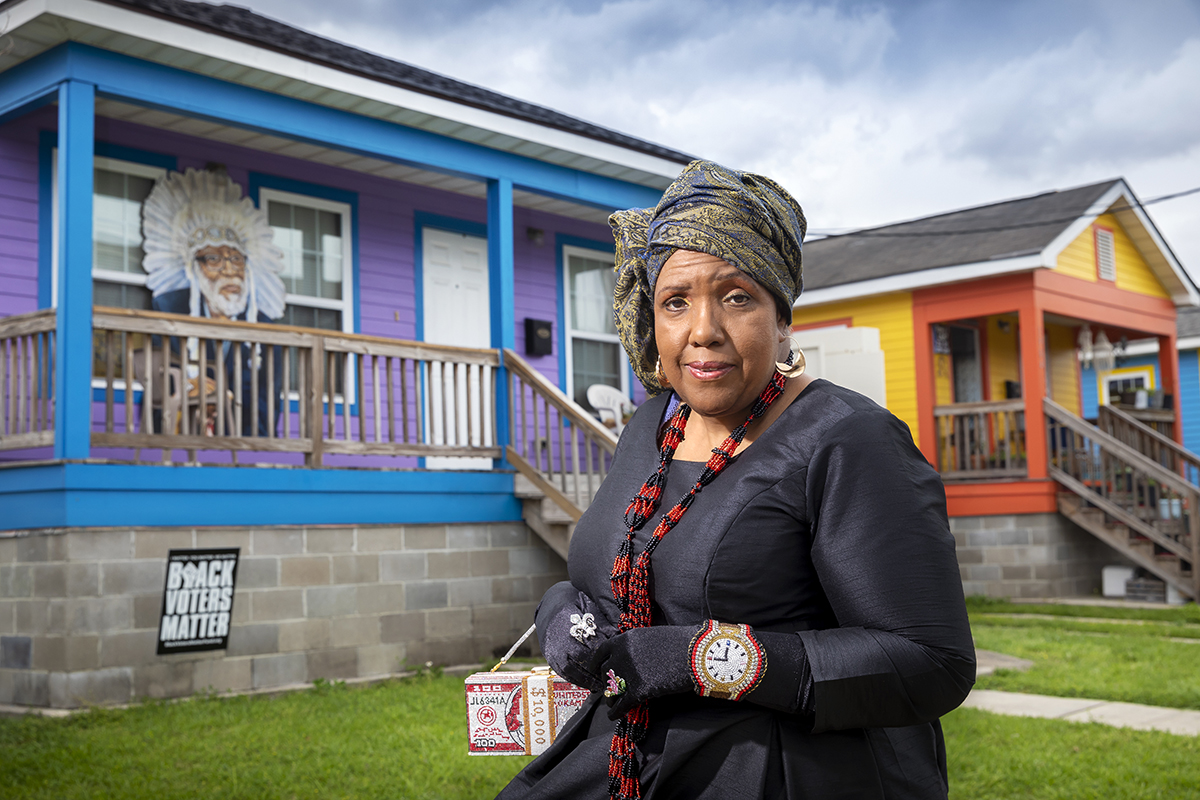 Cherice Harrison-Nelson is Queen of the Guardians of the Flame Maroon Society in New Orleans, a breast cancer survivor, and longtime patient of the New Orleans Musicians’ Clinic, allied with LSU Health New Orleans.

BATON ROUGE—April 6, 2022—Cherice Harrison-Nelson is a Mardi Gras Indian Queen. She is the third generation, among five in her family, to carry on the Black New Orleans tradition of “masking Indian.” It’s a celebration of freedom and of telling your own story that involves many, many months of sewing intricate, narrative beadwork into powerfully colorful suits, usually revealed for the first time on Mardi Gras Day. The tradition is often described as an homage to the Native Americans who sheltered enslaved people of African descent in Louisiana’s early days.

Harrison-Nelson, however, doesn’t describe what she does as “masking.” Instead, as Queen of the Guardians of the Flame Maroon Society, she reveals herself through her art. This includes her own personal history of surviving breast cancer, sewn into her dress and proudly displayed on her body. As a patient of the New Orleans Musicians’ Clinic, which has connected uninsured and under-insured Louisiana performing artists with LSU healthcare services and more since 1998, Harrison-Nelson has also become a conduit to care for others in her community.

LSU is the only healthcare system in the nation allied with a clinic that specifically serves musicians and artists.

“We’ve become, what they call, a ‘point of distribution,’” said Harrison-Nelson, who lives and works in the New Orleans Musicians’ Village, surrounded by other culture bearers. “[After Hurricane Katrina], the clinic gave us a stack of cards to give out to people, like a coupon, so they could get an appointment and wouldn’t have a copay. It gave people a little safety. More recently, people have been coming to us for tests, and the clinic gave us several boxes.”

LSU is the only healthcare system in the nation allied with a clinic that specifically serves musicians and artists. On the day the New Orleans Musicians’ Clinic first opened its doors in 1998, Mardi Gras Indians performed outside, and one of them had to be brought into the clinic to be treated for asthma, which Harrison-Nelson suffers from as well.

“The clinic has helped our community in so many ways,” Harrison-Nelson said. “I’ve had chemo, radiation, and surgery, and so far, so good. I can get my meds, therapy. Do you remember the Schwegmann’s grocery store? You could get everything you need in one stop. The clinic is like healthcare Schwegmann’s.”

Every detail Harrison-Nelson adds to her beadwork represents some aspect of personal and cultural survival. Her father, Big Chief Donald Harrison, Sr., always encouraged her to take her art beyond the “simply pretty.”

“He said, you have to get to the higher levels of learning and understanding—analysis and synthesis,” Harrison-Nelson said. “You have to express yourself on your own terms and honor who you are.”

She pointed to a photo of her father that hangs on the wall of her studio. He died at age 65, a few months after the New Orleans Musicians’ Clinic opened. In the photo, he wears a massive, white Mardi Gras Indian suit with an enormous, feathered headpiece.

“You can’t see me, but I’m in that photo,” Harrison-Nelson said. “I’m standing on a chair behind him, holding his crown up.”

“I’ve been lucky, and some of us are not as lucky,” she continued. “The clinic is committed to protecting not just people, but cultures, and African American cultures. They don’t provide just medical care, but look after your overall quality of life. And as a breast cancer survivor, I’m alive. I’m alive! I tell myself that every day.”

LSU researchers advance the science to fight breast cancer, from prevention and detection to treatment

Breast cancer is the most common cancer in American women besides skin cancer. About 1 in 8 will develop invasive breast cancer over the course of her lifetime. Louisiana has the third-highest breast cancer death rate in the country, and Black women are about 40% more likely to die from the disease than white women, according to the Centers for Disease Control and Prevention.

LSU chemist and collaborator discover a natural-based therapy to treat an aggressive form of breast cancer (LSU College of Science, 2022)

This news story was featured in LSU’s free research publication, Working for Louisiana, where you can learn more about how work on every LSU campus impacts residents and industry in the state and beyond.