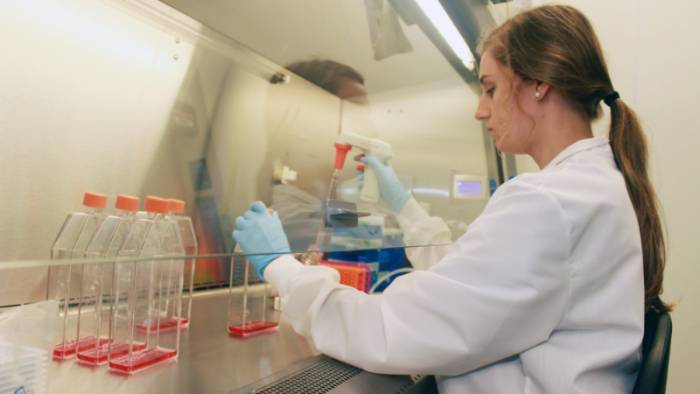 BATON ROUGE, LA – With an estimated 266,120 cases of breast cancer expected to be diagnosed by the end of 2018, research on the disease is more important than ever.

In fact, each study further contributes to eradicating a cancer that affects one in eight women in the United States each year. Aiding in this challenge are LSU Biological and Agricultural Engineering Assistant Professor Elizabeth Martin and a team of BAE students who are working to identify how breast cancer and stromal interactions lead to drug resistance, which can help doctors discover the best, individualized treatments for their patients.

“Overall, we want to think outside of the tumor itself and see how the environment facilitates cancer progression,” Martin said. “So, instead of just looking at the cancer cells, what else is there that’s different?”

The environment around a breast cancer tumor consists of matrices, collagens, adipose (fatty tissue), and stem cells. Tests have shown that a person’s stem cells can enhance cancer, making the cancer cells more drug-resistant and invasive. What Martin and her team don’t know, is how the stem cells in breast tissue are affected by cancer.

“It’s not just a one-way street,” Martin said. “There must be a lot of cross-talk, where the cells are talking back and forth.”

In order to communicate to one another, tissue cells “talk” to their environment by releasing, or secreting, proteins. The secretome, as it’s called, not only affects the cancer cells, but also the cells around them. LSU BAE graduate student Connor King of Baton Rouge works in the H.D. Wilson Laboratory to expose the cancer secretome to stem cells to see if there is a phenotypic change—that they are not the same as the cells not exposed to the secretome of cancer cells. So far, he has found that there are changes.

“Their ability to become different cell lineages is different, and there’s a difference in the amount of adipose,” King said. “Our job is a very tiny building block on this extremely complex system.”

BAE junior Gracie Miller of Geismar, La., has found that since cancer cells can make their own matrix, there is a correlation between certain types of matrix genes and the outcome or survival of patient samples.

“Meggie Lam [BAE senior from Hammond, La.] is taking those specific secreted matrix proteins and over-expressing them in cancer cells to see, if they start making this matrix, what happens when they grow on it?” Martin said. “Does it alter the way they respond to chemotherapy? That way, you can tell if someone has this less identified matrix and whether or not that will dictate how they’re going to respond to therapy. It gives you another level for identification on how the tumor may respond beyond traditional prognostic markers for breast cancer.”

Prognostic markers for breast cancer include estrogen and progesterone receptors. Cancer cells with these receptors depend on estrogen and hormones, such as progesterone, to grow. ER+ means estrogen is likely causing the cancer cells to grow. Depending on what the markers are, a patient will need endocrine therapy, chemotherapy, or an HER2 (human epidermal growth factor receptor) inhibitor, in addition to therapy or removal.

“They’re not always accurate, though,” Martin said. “For ER+ patients, 40-45 percent of individuals develop resistance or have de-novo resistance, which means they were already resistant and they’re not going to respond to therapy. So, if we can add another layer of markers, like if you have this estrogen receptor but also have a specific collagen up, that may be indicative of more drug resistance. If we can identify what induces drug resistance, then we have another layer of identifying how a person will respond to treatment.”

BAE PhD student Ethan Byrne of Walker, La., works alongside King and Lam in the lab, placing cancer cells on different matrices instead of growing them on a flat dish. He has seen that there are different response profiles, depending on what the cells are growing on, which demonstrates that not all tumors are created equal.

“The idea is, if you have cells that respond better on fibronectin versus laminin to a particular therapy, then you can say tumors with high fibronectin should respond best to that therapy,” Martin said.

The next step for Martin and her team is validating the tumor samples by showing the correlation between the patient’s tumor type, matrix and other components.

“Right now, we are just cells in a dish,” she said.

As for how long it will be before doctors are able to start pursuing more individualized treatment plans for breast cancer patients, Martin says they are already heading in that direction.

“They’re already moving toward this idea of patient precision medicine,” she said. “If you want to know how to treat someone, you have to treat that individual on their entire genetic background. However, it’s super expensive and they need to have someone analyze all the data. But if you can find a couple of other indicators, in addition to traditional ER, PR, HER2 presence, then we can say we are moving closer to that ideal.”