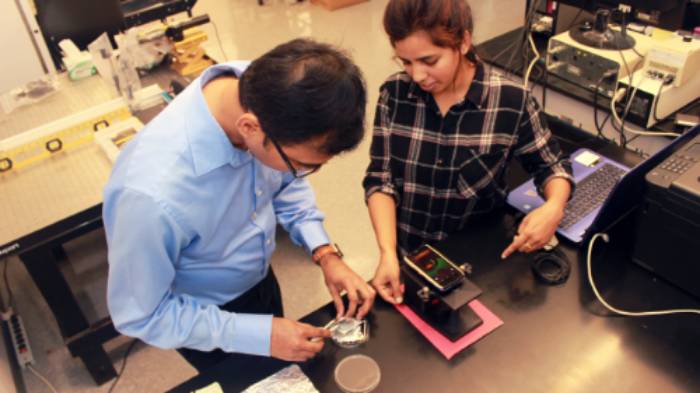 BATON ROUGE, LA – With increasing demand and pressure on healthcare budgets, progressive initiatives are being taken to make healthcare more patient-centered, reliable, accessible, and affordable. Point-of-care devices have become a cost-efficient and feasible way for people to monitor their own health, as opposed to waiting weeks for expensive test results.

Seeing the many POC devices that already exist for diabetes, pregnancy, and other health conditions, LSU Mechanical Engineering Assistant Professor Manas Gartia wondered why there couldn’t be one for breast cancer genetic testing.

“Breast cancer is the second most common cancer in women in the United States,” Gartia said. “In 2015, 41,523 women died of breast cancer in the U.S., with 3,523 of those in Louisiana. We believe that early detection saves lives. That’s why genetic testing is so popular. People want to catch it [cancer] before it’s found in a mammogram.”

Gartia and his team of researchers have created an accessible way for women—and men—to test for the BReast CAncer gene one, more commonly known as BRCA1. If the test comes back positive, it means there is a mutation in the BRCA1 gene and, therefore, a much higher risk of developing breast or ovarian cancer in women and pancreatic cancer in men.

“We chose the BRCA1 gene due to its high prevalence in half of the global population, and secondly, because a lot of researched data about the alterations and mutations are available at the gene level from various databases,” Gartia said.

Rather than pay for a home test kit, which would still require a doctor’s visit for an explanation, or go to the doctor, where the wait time for results could be several weeks and cost thousands of dollars, Gartia proposes doing a DNA microarray analysis using a smartphone and portable fluorescence microarray-based imaging system called the FluoroZen, which provides results in 20 minutes.

The FluoroZen works by analyzing DNA (saliva or blood) that is placed on nitrocellulose (NC) paper, which is then set on a glass slide holder. The FluoroZen detects the fluorescent oligonucleotide spots on the NC paper using two light spectrum filters—one to excite the fluorescent dye and the second to capture the emission spectrum. The spots with higher intensity will be brighter, indicating the presence of the mutated BRCA1 gene. A smartphone, which is attached to the POC device, then shows the results (a simple YES or NO) on the screen after taking a picture of the spots.

“There will be a smartphone app to download so you can see the results,” Gartia said.

Gartia believes that early detection is the best way to beat cancer, which is why he and his team want to make the FluoroZen accessible to everyone through their general physician’s office.

“According to 2015 research data, there are 1.7 million women in 106 low-access counties [LAC] in the U.S. who must travel more than 150 miles to see a gynecologic oncologist,” Gartia said. “In 1,125 LACs, 14.8 million women can’t find one within a 50-mile radius. In Louisiana, there are only eight gynecologic oncologists available to 669,705 women in LACs, which makes up 44 percent of the state.”

On the FluoroZen testing being more affordable, Gartia says it would only cost $50 or less to run a test, though that’s no guarantee doctors and hospitals wouldn’t increase the cost.

“Doctors can charge more, but generally, all the costs are covered by insurance,” he said. “Most of the cost during our research is due to reagents and purification and extraction of DNA from blood or saliva. The cost of the microfluidic device is less than $5 and less than $1 if mass produced.”

Though Gartia prefers to focus on BRCA1 testing for now, he says the FluoroZen can be used for many different things.

“Utilizing paper microfluidics for biological assays, along with the smartphone readout setup opens up the possibility of transferring various clinical, as well as environmental, tests to POCT,” Gartia said. “Dr. Melvin [LSU Chemical Engineering Professor Adam Melvin] is interested in finding neurotoxins and hepatotoxins, such as microcystin and cyanopeptolin, due to harmful golden algal blooms found in Lake Pontchartrain. If we can attach that toxin to a fluorescent dye, then we can detect whether that particular toxin is in your water sample.”

Gartia looks forward to the day his FluoroZen will be completed and available to the public through their doctor’s office. Until then, he emphasizes the importance of early detection and, on an optimistic note, stresses that not all women and men should get tested for the BRCA1 gene.

“Only 10 percent of people have this inherited gene,” he said. “There are many questions to answer before getting tested.”

To learn if you should consider getting tested for the BRCA1 gene, visit https://www.komen.org/breast-cancer/facts-statistics/research-studies/topics/brca-1-or-2-gene-mutations-and-cancer-risk/.