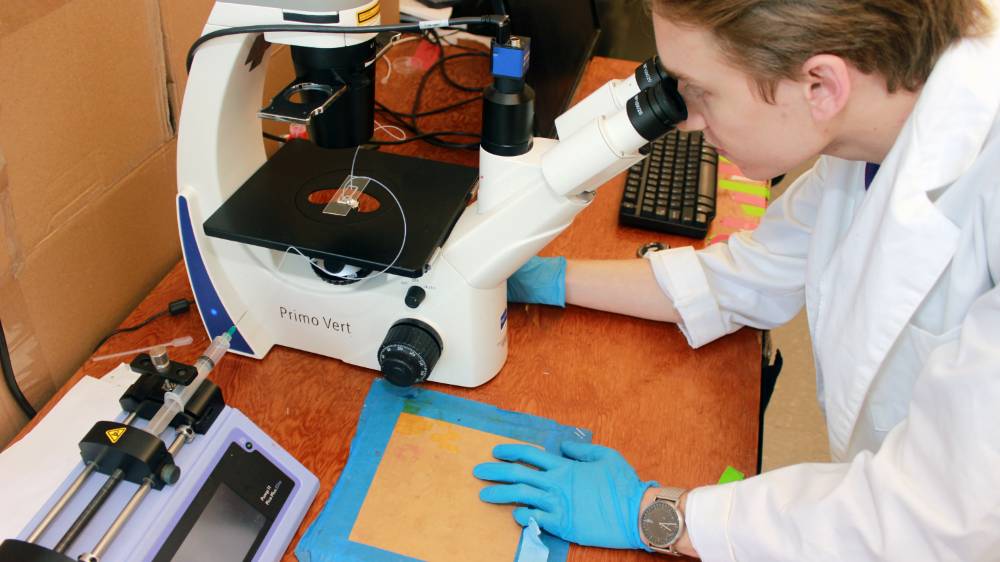 BATON ROUGE, LA – Though treatment for breast cancer patients proves successful in most cases, a large percentage of patients relapse with metastatic breast cancer, meaning the cancer has spread to other parts of the body.

Accounting for 90 percent of cancer-related deaths, metastases, also known as stage 4 cancer, are harder to treat since the cancer is often resistant to localized therapies such as surgery or radiotherapy. For the past two years, LSU Chemical Engineering (ChE) senior Grant Landwehr has studied metastatic breast cancer cells in order to help develop new treatment strategies and therapies against secondary metastasis.

“Basically, what we’re trying to do is better understand cancer at a fundamental level,” said Landwehr, a native of Covington, La. “We’re not looking at if we need to treat metastatic cancer differently, but the why. If we know why they’re behaving differently, then we can one day prevent them from being more metastatic.”

In order to do this, Landwehr has been working alongside LSU ChE Professor Adam Melvin to discover how fluid shear stress forces affect metastatic cancer cells by looking at how the cells behave biophysically. In metastasis, a tumor sheds a small number of cancerous cells called circulating tumor cells (CTCs) that spread throughout the body to form secondary metastasis. As the CTCs move throughout the circulatory system, they experience physiological forces not present in the initial tumor environment, namely, fluid shear stress (FSS).

Landwehr’s work in the lab entailed designing a microfluidic device to isolate and study the response of single breast cancer cells to conditions experienced in the circulatory system during metastasis. He studied the differences in two model breast cancer cell lines, including a triple negative cell line and an estrogen receptor positive cell line, that respond to treatment differently. Landwehr’s project differs from previous studies in that they utilize a microfluidic device to study how FSS alters single cells.

“Both cell lines exhibited greater deformability due to increasing duration and magnitudes of FSS,” Landwehr said.

In a nutshell, the greater the FSS, the more aggressive the cancer cells are predicted to become on their journey to creating a metastatic tumor. Landwehr’s research also found that certain cells rapidly deformed but reached a threshold value after five minutes of FSS, while other cells deformed at a slower rate but with a larger threshold of deformation.

“Ultimately, this behavioral diversity suggests the presence of distinct cell subpopulations with different phenotypes,” he said. “The bottleneck effect observed in these cell populations suggests FSS alters the phenotype of cells in such a way that cells begin to act similar to other cells under more intense magnitudes and durations of FSS. These findings would not be possible without the use of a microfluidic device.”

“Performing single cell studies is of increasing importance,” Melvin said, “as several reports have demonstrated a significant heterogeneity across a population of cancer cells.”

This heterogeneity oftentimes results in drug resistance and relapse because primary treatment options fail to eliminate the entire population of cells.

“Studying single cells is just like grading individual students in a classroom,” he said. “Most students wouldn’t be happy getting the class average; however, that is a common-approach use to characterizing cancer cells.”

Metastatic breast cancer cells frequently differ from the preceding primary breast cancer cells in that they often develop resistance to several lines of previous treatment and have acquired several properties that permit them to metastasize to distant sites. Metastases can be treated, sometimes for many years, but it cannot be cured.

With Landwehr’s research complete, he is now moving on to phase two.

“What we’re moving onto now is studying the intracellular signaling pathways linked to cancer progression and investigating how these fluid stresses could activate a pathway that makes cells more metastatic or drug resistant,” he said.

Overall, Landwehr has enjoyed using his engineering experience to make a difference, even if it’s just a small piece of the puzzle.

“It’s been really interesting to be able to combine chemical engineering principles to study biological systems, specifically cancer,” he said. “The thing with cancer research is that there’s not one real big breakthrough. I hope that our research will provide insight into further research.”