Students in an LSU Ogden Honors College seminar are capturing the first-person narratives of Louisianans who have served in the military. In addition to being added to the T. Harry Williams Center for Oral History, part of the LSU Libraries, the oral histories they collect will be housed in the Library of Congress’ national database as part of a partnership with the Library of Congress Veterans History Project. 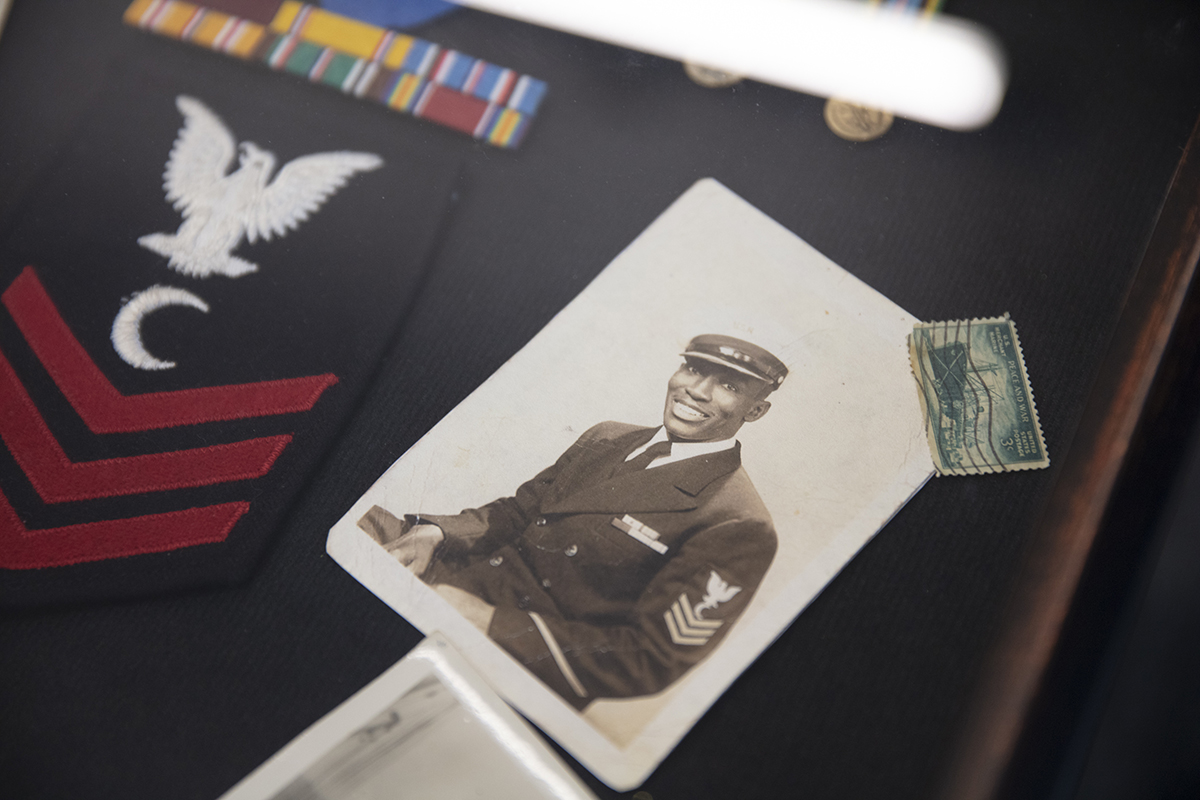 Items belonging to Leroy Poydras, a Lafayette native, who served as a Chief Petty Officer in the U.S. Navy during World War II. In 2019, his oral history was captured by Michelle Melancon, an assistant processing archivist in LSU Libraries and a volunteer for Oral History Day, held by the Library of Congress Veterans History Project. In 2021, he participated in a follow-up interview with Dale Rhodies, a graduate student in LSU’s T. Harry Williams Center for Oral History.

Students in Honors 2020: Oral History and the Louisiana Veterans Experience are learning how to preserve valuable historical information by collecting personal recollections through recorded interviews. These interviews become powerful primary sources that are available to anyone interested in understanding the impact of Louisiana veterans who have served in the U.S. military during the 20th and 21st centuries.

According to Jen Cramer, director of the Williams Center and instructor of the course, “What’s amazing about this class is that you’ve got these students practicing qualitative research and going into the field as freshmen and sophomores doing original research. There is a lot of work to get to that point, and they’re creating this primary source that is going to be preserved locally and nationally,” Cramer said.

In August, Monica Mohindra, director of the Library of Congress’ Veterans History Project, flew to Baton Rouge to meet with the students in Honors 2020 and discuss the collaboration between LSU and the Library of Congress. Mohindra spoke about the importance of preserving these stories at the local and national level. During the talk, she emphasized how these students are “creating a living memorial to veterans’ stories…not just about their service, but how that service impacted their lives and communities.”

A few weeks after Mohindra’s visit, Louisiana’s Lieutenant Governor, Billy Nungesser, also spoke to the Honors 2020 students about how their work will add insight into the rich history of the state and enhance its culture.

“Louisiana veterans are near and dear to my heart. So, when I heard about these LSU students who were preserving their stories for future generations of Louisianans, I recognized the significance of what that meant. What a difference it will make to the veterans telling these stories as well as to other veterans who will hear these stories and feel that what they have done for their country and their state has made a lasting difference to the citizens of Louisiana,” Nungesser said.

The oral history process is much more intensive than simply recording someone talking about their life. First, the students select their interview subjects. Once a subject agrees, they fill out a biographical data form with information, such as when and where they were born, when and where they served, medals they received, big operations they participated in and when they left the service. From there, the students conduct 10 hours of background research for every hour they intend to interview their subject. They familiarize themselves with the historical context in which their subject served and develop thoughtful in-depth questions. Furthermore, the students are trained on how to deal compassionately with any trauma that may come up in the interview. Then, they work in teams: one serves as the interviewer and the other as an audio engineer in charge of the video, audio and any photography. Afterward, they transcribe the interview, making it keyword searchable for researchers looking for information. 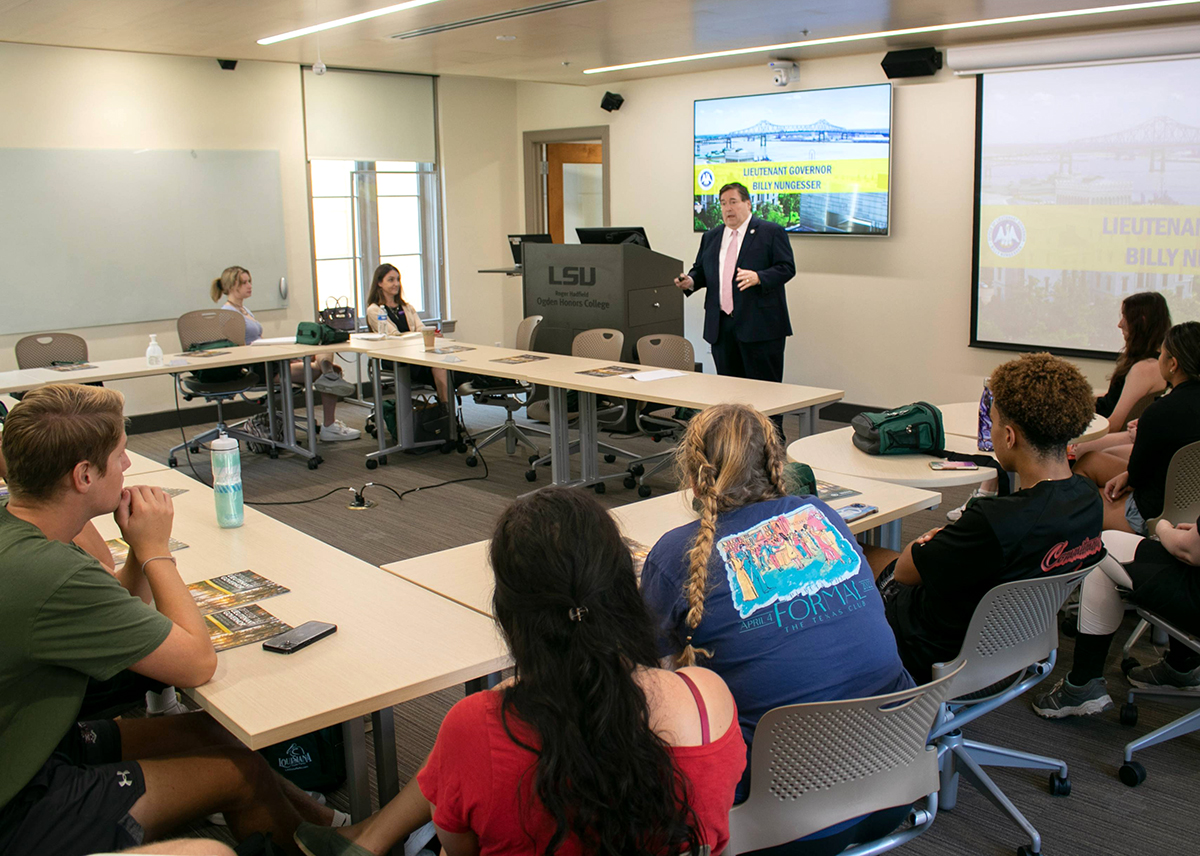 On August 30, Louisiana’s Lieutenant Governor, Billy Nungesser, spoke to the Honors 2020 students about the importance of Louisiana veterans to the state and its culture.

“The more localized your history becomes, the harder it is to track. It’s easy to find the history of America. It’s a little bit more difficult to find primary sources on Louisiana…So, the more things that become available [regarding] the history of Louisiana, the better we can understand our culture and our own history,” said Ajalynn Crum (Lake Charles, La.), a student in the class and a mechanical engineering freshman in the Ogden Honors College.

Crum interviewed Tara Jones, a Black woman who served as a staff sergeant in the Louisiana Air National Guard from 1988 to 1997. Amara Bordelon (Baton Rouge, La.), who is also an Ogden Honors College freshman studying mechanical engineering, served as the audio engineer. During the Persian Gulf conflict, Jones served in a ground support capacity in the 159th Fighter Wing Maintenance Squadron. In her interview with Crum, Jones described the sexism she encountered on the job.

“It was very much a ‘good ole boys’ mentality,” Crum said.

Ultimately, Jones left the service to be closer to her mother after her mother had a stroke—Jones was her primary caregiver. She had entered the service to pay for college and was able to earn a degree in finance. Upon leaving, she worked at a bank for many years but did not find it as fulfilling as her service to her country. Now, she works at the Louisiana Department of Veterans Affairs where she is making a difference by working with incarcerated and disabled veterans.

“At first, I was a little nervous talking with the students, but they were great,” Jones said. “As a female veteran, I felt that it was important to share my story since the military traditionally has been such a male-dominated field. Whatever doesn’t get recorded or told can easily get lost, and that’s history we’re losing, knowledge. Plus, kids don’t seem to speak as much to their elders today. Being raised up, my mom always told me things weren’t the same when she was a child. Now, I tell my kids that. So much is constantly changing, but if we preserve our experiences like these LSU students are doing, that’s a resource that someone could reach back to and study, perhaps later in life.” 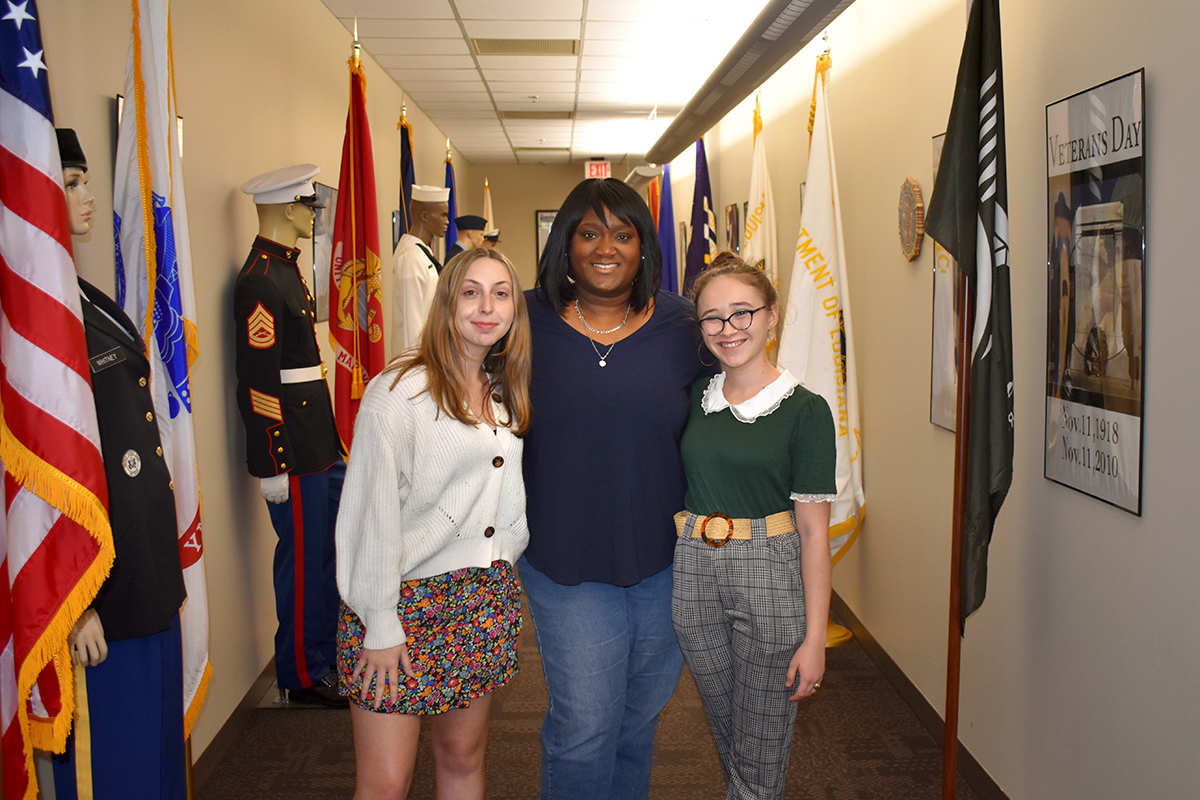 Tara Jones (center) is the Incarcerated Veterans Liaison and Louisiana National Guard Disability Benefits Administrator for the Louisiana Department of Veterans Affairs. She was a staff sergeant in the Louisiana Air National Guard (1988-1997) and more recently the subject of an LSU student-led oral history interview about her military experience. Ajalynn Crum from Lake Charles, La., (right) served as the interviewer while Amara Bordelon from Baton Rouge, La., (left) served as the audio engineer. Both students are Ogden Honors College freshmen studying mechanical engineering.

Crum describes her experience interviewing Jones as “a lot more human than just some grand narrative.” She feels that what differentiates oral history from other types of historical records is that it is inherently democratic. Usually, histories are written about important people—kings, queens and generals, not necessarily the rank and file. Oral history gives some of the narrative back to those everyday people and allows for richer and more diverse perspectives. In fact, Cramer’s class set out from the beginning to capture more diverse stories than what has previously been collected.

While World War II is thoroughly documented through the lens of oral history, the goal of the class was to compensate for the lack of stories of veterans who served in the Korean War, the Vietnam War, the Cold War and the Persian Gulf Wars. Furthermore, they strove to document stories of those who are notably missing from most war narratives, such as people of color and women.

To Cramer, the mission of the class and the mission of the Williams Center are aligned to document first-person stories about Louisiana history and culture, especially to help fill in the gap of under-documented communities and individuals and groups.

“It is very much a ground-up, grassroots process rather than a top-down process,” Cramer said.

In her capacity as director of the Williams Center, Cramer has long understood the value that these types of oral histories bring to the Louisiana community. The Williams Center holds several important interviews from Black Americans who served in WWII and returned to a country that did not give them the same respect or opportunities as white veterans. Despite their sacrifice, they were still made to use the back door or sit at the back of the bus.

“Many veterans from World War II, mostly African American veterans but even some white veterans, ended up participating in social movements in large part because of their experience in World War II—having been treated one way while abroad and then returning to very different treatment in the Jim Crow South afterward,” Cramer said.

One example is the founding of the Deacons for Defense and Justice, an armed Black self-defense group operating during the civil rights era in Bogalusa, Louisiana. Most of the founding members were combat veterans who served in WWII and the Korean War. 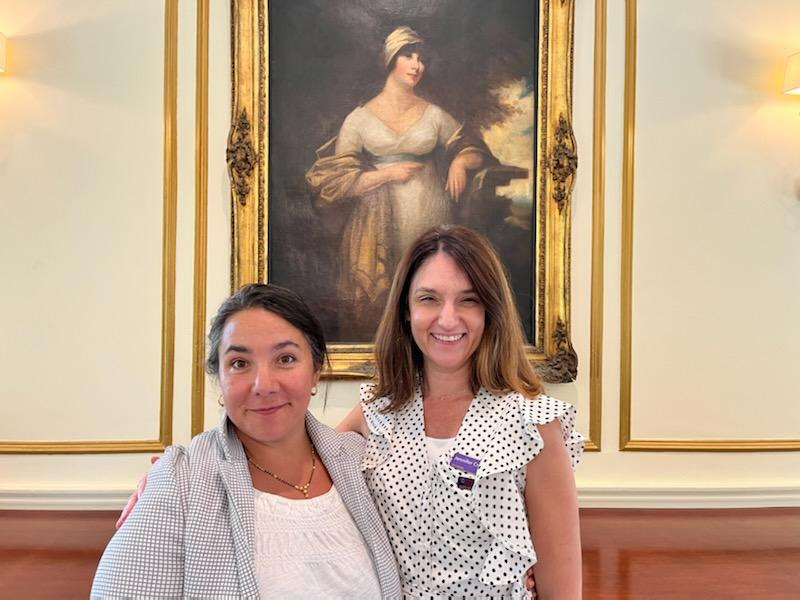 Another prominent example of this is the Baton Rouge bus boycott that was led by many WWII veterans, including Dupuy Anderson. LSU played an important role in uncovering the story of the Baton Rouge bus boycott which helped to plant the seed for the more well-known Montgomery bus boycott. The Williams Center and LSU’s College of Human Sciences and Education developed a collaboration in which students at McKinley High School interviewed relatives and neighbors on the topic and discovered a wealth of previously unknown information about it. This partnership, fueled by the support and efforts of students and residents from within the affected community, also resulted in a documentary, Signpost to Freedom: The 1953 Baton Rouge Bus Boycott. It was produced by Louisiana Public Broadcasting and helped the story become known. Additionally, the Williams Center turned the oral histories they collected from Anderson and others into a podcast on their website that is available to the public.

For Cramer, the work is personal as well as professional. Cramer is the granddaughter of two WWII soldiers, daughter of a Cold War veteran and sister to an Army veteran who served in the 160th Special Operations Aviation Regiment as a Nightstalker.

“I chose a civilian life, but I want to somehow help honor those who serve,” Cramer said, “Veterans are so much a part of our culture and have so much to teach us civilians about life and leadership. What better way to understand and honor the veterans in our lives than by providing a welcoming place to tell stories, and most importantly, to listen.”

Part of the Williams Center’s mission is to help members of the public with their own oral history projects. The center offers community workshops on best practices including interviewing techniques, how to conduct background research and how to navigate the paperwork required to have their oral histories housed at the Williams Center or the Library of Congress. For more information, email Jen Cramer at jabrah1@lsu.edu.

To learn more about the oral histories of Louisiana veterans stored in the T. Harry Williams Center for Oral History, visit the Louisiana Digital Library website.

To learn more about the Library of Congress visit to LSU, view the media advisory.