Freshmen and sophomores at LSU and Southern University are now pursuing a two-year leadership development program piloted by the LSU Leadership Development Institute (LDI). The goal is to develop future leaders for both military and civilian life with a commitment to service, excellence, and happiness.

Twenty-four students recently gathered around a horseshoe of tables at the Louisiana Emerging Technology Center, one of the anchor buildings in a rapidly growing cyber and defense footprint on LSU’s campus. Each was holding a deck of cards describing leadership dispositions, such as achievement attitude (A), balance (B) and communication (C)—all the way to zeal (Z). Sorting this alphabet into piles, the students identified their own strengths and stressors—a practice they’ll return to at the beginning of each semester as they work for the next two years to align their personal habits with their own leadership goals.

“I see Bengal Corps as an extremely rare opportunity to develop leadership skills early in life through not only practical experience, but leadership theory as well,” said Logan Price, an LSU cybersecurity and Army ROTC student who spends much of his free time helping families find missing persons using open-source intelligence. “I’ve gained a much better understanding of the differences between leadership styles, and how I, as a leader wanting to defend our country and cyber-assets worldwide, could help make the difference between a thwarted cyber-attack or losing millions of dollars in breached data.” 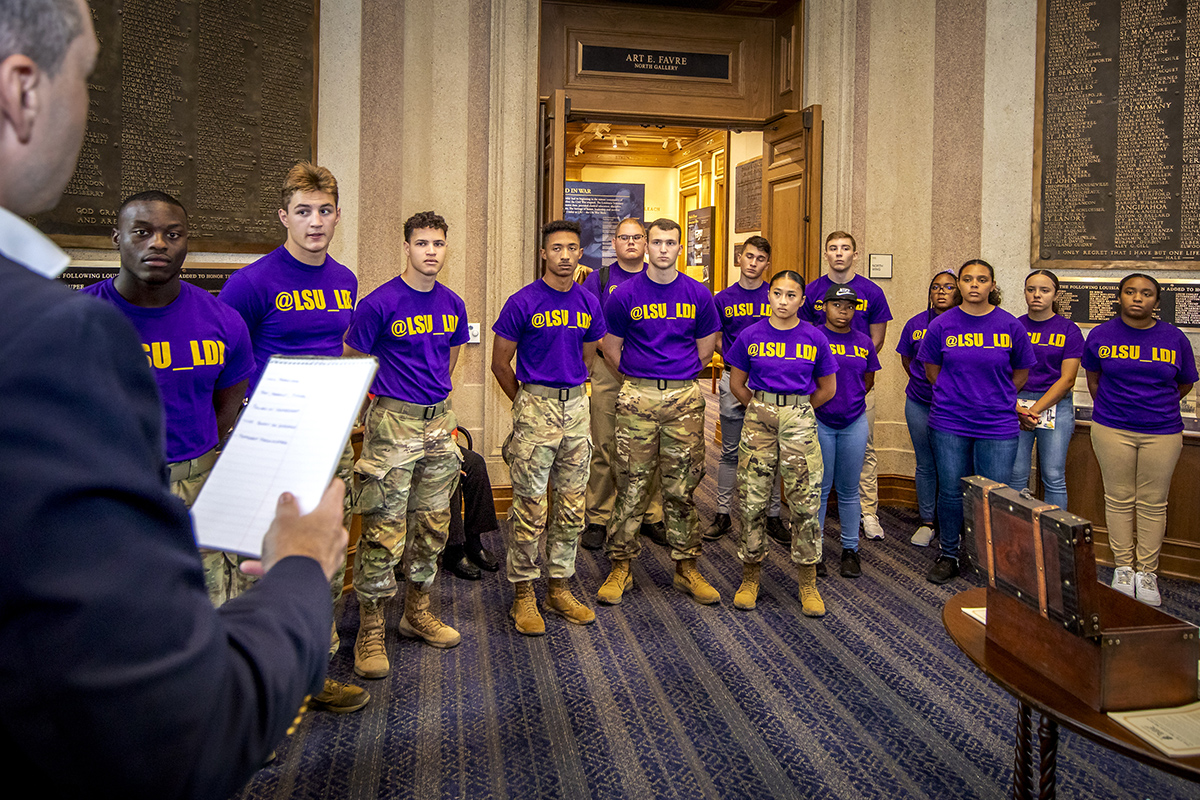 Captain Dillon Mathies with the Louisiana National Guard talked about the foundational values behind good leadership with the LSU Bengal Corps class inside the William A. Brookshire LSU Military Museum.

All of the students in the LSU Bengal Corps aim to advance state and national security. Almost all are engaged in ROTC, the Reserve Officers’ Training Corps, in either the Army and Air Force programs based at LSU or the Navy program at Southern University. The students’ academic majors span a wide variety of disciplines, including English, economics, civil engineering and construction management. While ROTC graduates commission as officers in the armed forces, thus becoming military leaders from day one, many Bengal Corps students also see themselves as future leaders in service to their home communities and home state—as lawyers and judges, entrepreneurs and innovators, or by running for political office.

“I want to help Louisiana not only on the cultural side but also the economic side, which is why I see myself studying law and going into politics,” said Taalib Auguste, an LSU political science major and Army ROTC cadet from Prairieville, Louisiana, who already trained with the Army as an intelligence analyst and remarks on how much of what he’s learned on the military side also translates to the civilian world. “Especially learning to work as part of a team and in service of others. My goal is to give back to the community that raised me.”

While the first semester of Bengal Corps focuses on leadership of self and developing a personal leadership philosophy, semesters two and three cover leadership of teams and organizations (multiple teams working together). The final semester prepares students to become certified peer coaches for incoming cohorts, allowing juniors and seniors to gain practical experience with coaching using an LSU-exclusive model called LADDER, which stands for Leadership Alphabet of Disposition Development Engagement and Reflection. This evidence-based model comes in many versions, such as LearnLADDER—the model used to develop student leaders, such as those in the Bengal Corps—as well as MedLADDER, LawLADDER, and Corporate LADDER for healthcare professionals, law enforcement and business and industry, respectively. The LSU LDI is currently developing yet another version in collaboration with military and veterans, called ServeLADDER, which could be implemented for leadership development in any branch of the military.

All of the LADDER programs address how to capitalize on strengths while managing stressors and optimizing strategies to engage others.

“Here at the LDI, we define leadership as the capacity to get others to willingly follow,” said Leslie Blanchard, executive director of the LSU Leadership Development Institute and creator of the LADDER model. “We are not in the business of creating ‘bosses.’ Instead, our mission is to develop within each person the ability to mobilize others toward common goals without fear of threat, intimidation or punishment.”

In recent years, the military, same as many industries, has struggled with retention. The top goal of the LSU LDI is to create workforce stability in all fields. When people are successful and happy in their jobs, they’re less likely to leave. Success and happiness, meanwhile, tend to follow from good leadership. 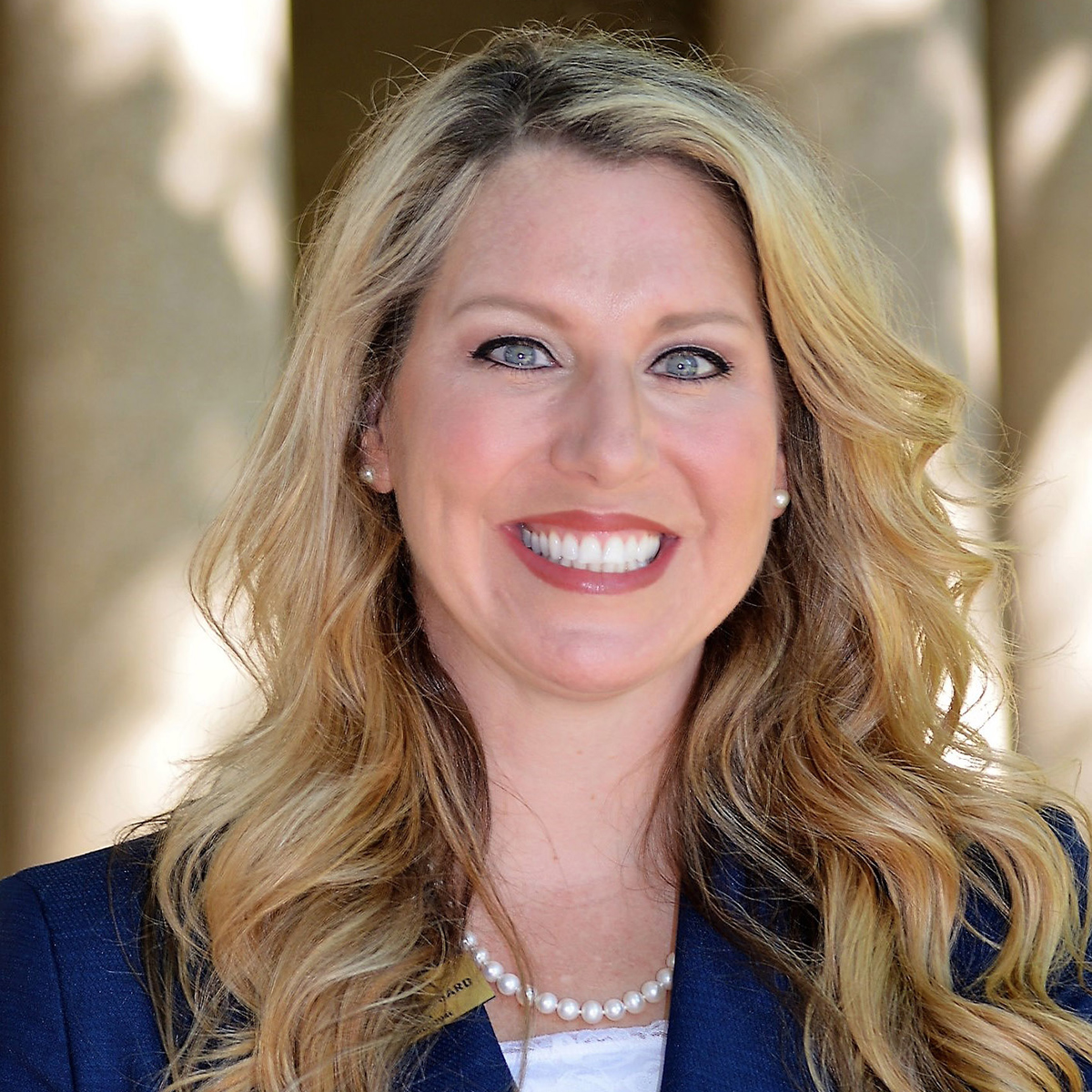 Leslie Blanchard, executive director of the LSU Leadership Development Institute, or LDI, leads the Bengal Corps program for LSU and Southern University ROTC cadets and cybersecurity majors. The LDI is not in the business of creating “bosses,” she says: “We define leadership as the capacity to get others to willingly follow.”

“Our armed services, especially, are very good at identifying what good leadership looks like when it’s done well, and then conveying that to others in the career pipeline: ‘This is what good leaders do; do this,’” Blanchard said. “All branches teach a myriad of courses, but there isn’t a structured process for self-development, and that’s what ServeLADDER seeks to do.”

LADDER connects good leadership practices with personal habits through customized action plans for improvement. It doesn’t matter where you get on or off the ladder as long as you move up.

Michael Shaw, a helicopter pilot, lieutenant colonel in the Army and military professor in the U.S. Naval War College, has been working with the LSU LDI to refine ServeLADDER.

“The Army is not failing,” Shaw said. “We build, train and develop leaders very well, but much of the feedback processes support organizational needs rather than the individual.”

“Leadership is complicated,” Shaw continued. “It’s not just ‘point fist, take hill.’ Our culture and society are changing. The right person at the right time in the right organization can make a bigger difference than a good person in an organization at any time. That’s the value I see in ServeLADDER and Bengal Corps. These programs take you where you are—not where the organization is or what the organization wants—and allow you to look internally and build translatable capacity, whether you serve an entire career in the military or start a business.”

“If I had been able to go through a program like the LSU Bengal Corps while in ROTC at LSU, it would have more clearly defined what branch I went into and what subject area I focused on,” Mathies said. “I chose to commission as a communications officer out of homage to my grandfather, who was a communications sergeant in World War II. It had very little to do with my interest in the Signal Corps or my communication abilities. However, if someone is able to identify and capitalize on their own abilities early on and fully use the resources LSU has to offer, it puts them on the path to make deliberate decisions regarding their future.”

“Natural leaders aren’t the only leaders; leadership is learned,” Mathies added, as he now manages a full-time force of about 40 Louisiana National Guard soldiers. “One key component of leadership is decisiveness; how to make an effective decision quickly. That confidence, being able to stand in front of people and say, ‘This is what we’re going to do,’ that doesn’t come naturally to a whole lot of people, including me. I’ve made my way to it, but I had to fall on my face, get up, and learn from my mistakes to be able to do so. My method was chaotic and unorganized. Something like Bengal Corps would have given me the tools to execute a deliberate plan.”

“We’ve gotten better at leadership development in the Air Force, but we tend to focus on the highest levels first because they have the greatest scope of responsibility and we think they’re going to have the greatest impact immediately,” O’Neil said. “But I honestly think there’s a lot to be said for flipping that and focusing on young cadets who can enter the Air Force with an understanding of the strengths and stressors that come with being the particular type of leader they are.”

“Knowing yourself can help people vector to positions in the military that are actually a much better fit for them where they are happier and perform better,” O’Neil said. “If we want to grow strong leaders for our national security, a program like Bengal Corps can help our students get several steps ahead in terms of their ability to bring together a team.”

“Although we emphasize diversity today, our future is really in developing unity,” Dickson said. “Bengal Corps is a great initiative to give our junior leaders the capacity to contribute to growing unity in their future military units, in their communities, and throughout our nation.” 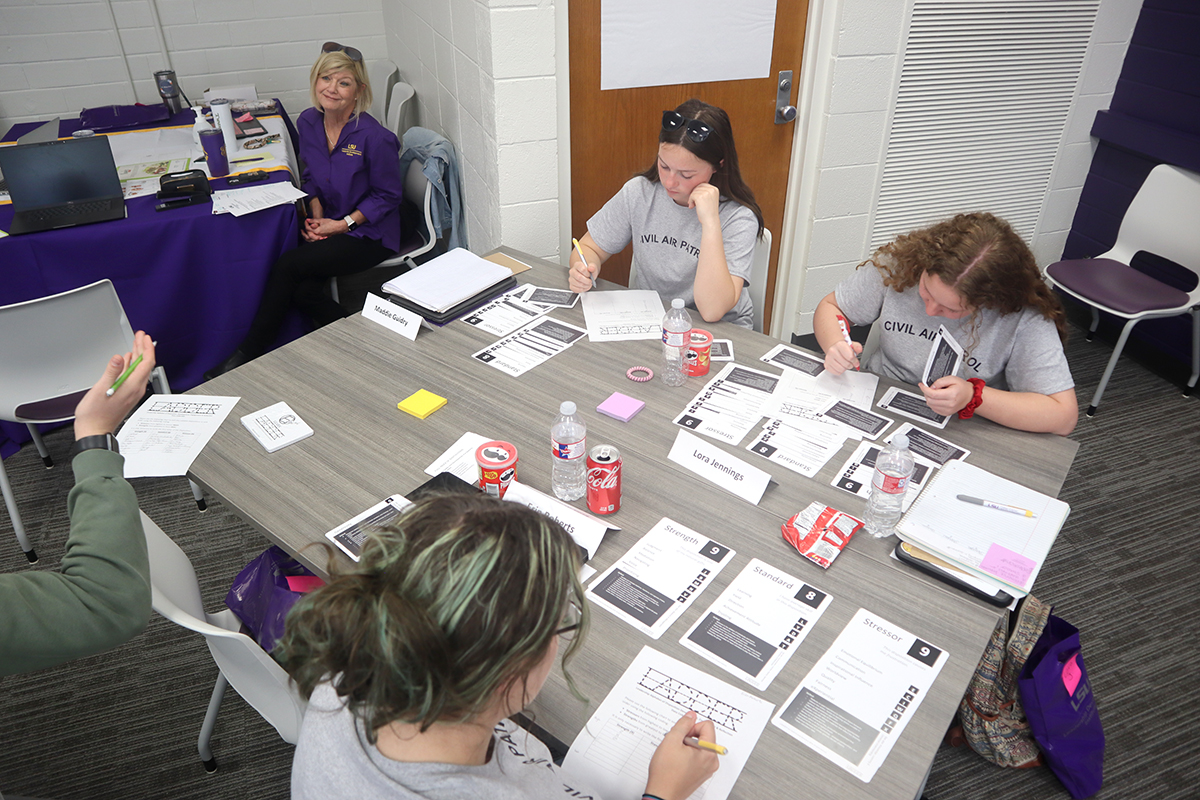 Earlier this year, Air Force veteran and Civil Air Patrol instructor Lee Guidry brought a group of Italy High School Civil Air Patrol cadets to LSU from Texas to engage with LearnLADDER. The students belong to the last cohort that was on campus in January 2018 when a school shooter nearly killed one of their peers, 15-year-old Noelle Jones, on her first day in Civil Air Patrol uniform, before Guidry stopped him.

“I’ve watched these kids go from tragedy to triumph,” Guidry said. “We’re now trying to build our own leadership program, much like the LSU Bengal Corps, to continue to turn stressors into strengths. Seeing these teenagers go ‘Wow, I never thought that about myself’ as we went through the program at LSU made me realize a program like this really could be reproduced in any high school—it doesn’t necessarily have to be Civil Air Patrol or JROTC—because we can use it to make better leaders and better people, to be honest.”

Nina Donald, a Southern University student and English major from Baton Rouge, Louisiana, joined the LSU Bengal Corps program as an Air Force ROTC cadet. She is the first in her family to join the military.

“I’m fascinated with aviation but afraid of heights a little, so I see myself supporting from the ground,” Donald said. “In LSU Bengal Corps, I’ve grown overall as a person. Especially, I’ve realized the importance of openness. It allows me to work through stressors so I can be a better leader for others.”

The Bengal Corps program is an acronym for Building Educational Navigation and Growth for Aspiring Leaders (BENGAL). For more information about the Bengal Corps, LADDER, and leadership development programs at LSU, please contact the LDI.