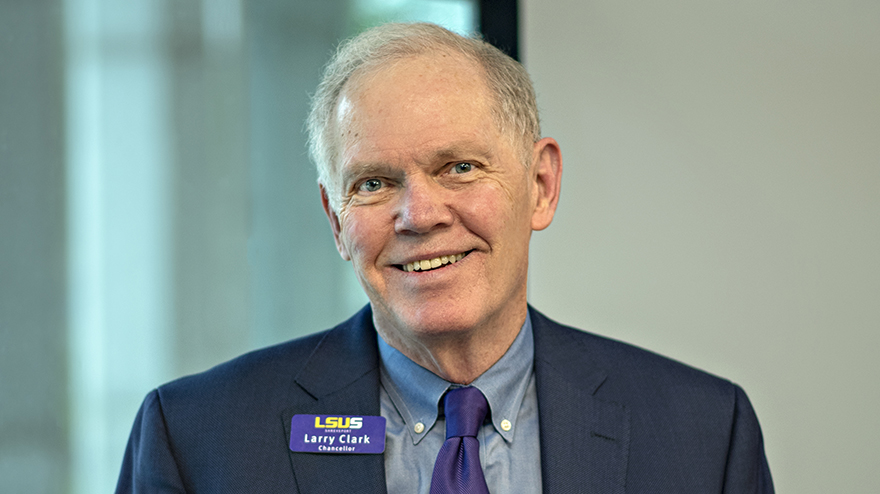 SHREVEPORT – Following a more than 45-year career, LSU Shreveport Chancellor Larry Clark has announced that he will retire at the end of the academic year. Clark made the announcement during the LSU Shreveport Planning council meeting on campus today.

“Being the Chancellor at LSU Shreveport has been a very special privilege,” Clark said. “It has been a joy to closely work in team with university faculty and staff to help LSUS sustain excellence and achieve great impact for our students and this region. Our students are top-notch, and the faculty and staff consistently exceed my expectations. I have full confidence in the future of LSU Shreveport.”

During Clark’s tenure, LSUS has seen growth in the total number of degrees awarded this past year; ranked programs; increased funding for campus initiatives; and new pathways of opportunity for graduates

“We appreciate everything Chancellor Clark accomplished and the leadership demonstrated at LSUS over the last eight years as chancellor,” said William F. Tate IV, LSU president. “In our brief time as colleagues, I witnessed his passion for the students, faculty and staff on campus and his efforts to impact the lives of those in North Louisiana through the university.”

Tate said a search process will begin in short order for the next chancellor with the goal of having that person in place by the start of the next academic year.

“The chancellor’s position at LSUS offers an opportunity to grow an attractive institution with many assets in place and more opportunities for expanded academic programming and economic development in partnership with LSU Health Science Shreveport,” Tate added.

Clark returned to LSUS as chancellor in 2014 after having served as a faculty member and Dean of the School of Business from the early 1980s through the mid-1990s. In the interim, Clark served as Dean of the schools of business at Sonoma State University and the University of North Carolina Wilmington. Just as he became dean at LSUS, Clark became the youngest lead author of a major business textbook with McGraw-Hill Inc.

In an initiative begun by his predecessor Interim Chancellor Paul Sisson and brought to fulfillment by Clark and a core group of dedicated faculty, LSUS has achieved national prominence for its online programs. This enabled LSUS to increase enrollment from nearly 4,000 to over 8,600 students. More recently, LSUS has collaborated with LSU Health Shreveport to create research opportunities for both faculty and students, as well as joint academic programs. During this past legislative session, LSUS was granted $2.5M to support cybersecurity initiatives that closely link to a previous $1.2M Louisiana Economic Development grant and will enable the University to establish an on-campus Security Operations Center in the LSUS Technology Center.

Clark consistently attributes such successes to the collaboration and support of LSUS faculty, staff, and students, and to President Tate, the LSU Board of Supervisors, the LSUS Foundation, the LSUS Alumni Association, the Noel Foundation and the state legislature.

As Clark prepares to retire, the university is positioned for future success that will attract the next LSUS chancellor. Upcoming and continuing projects include renovation of two key buildings on campus, construction of a driving bridge from the apartments to the campus, establishment of an MOU with LSUHS for a guaranteed interview program, further curriculum alignment with industry standards, and expansion of K-12 pipeline offerings to shrink achievement gaps in the region.

“Larry Clark’s committed and principled leadership has transformed and invigorated LSU Shreveport, allowing us to serve an increased and diverse student body,” said Helen Taylor, LSUS Provost and Vice Chancellor for Academic Affairs. “He will be leaving an indelible mark on the institution and on Shreveport itself.”

ABOUT LSU SHREVEPORT
Founded in 1967, LSUS offers a wide array of nationally accredited undergraduate and graduate degree programs, including a doctoral degree. The university’s mission is to educate a diverse population of graduate and undergraduate students; engage in regional and global thought leadership through community collaboration and service; and innovate to enhance the application of knowledge and intellectual discovery through faculty and student research and creative endeavors.