The LSU-developed tool to predict storm surge and flooding during severe weather events—the Coastal Emergency Risks Assessment, or CERA, website—has become an essential resource for thousands of emergency managers and first responders in Louisiana and the nation’s coastal states to help protect people and infrastructure. Now, the tool will become even smarter and faster, thanks to artificial intelligence, or AI, and support from the U.S. Department of Energy, which is looking to secure key energy assets, especially along the Gulf Coast, from stronger and more frequent storms. 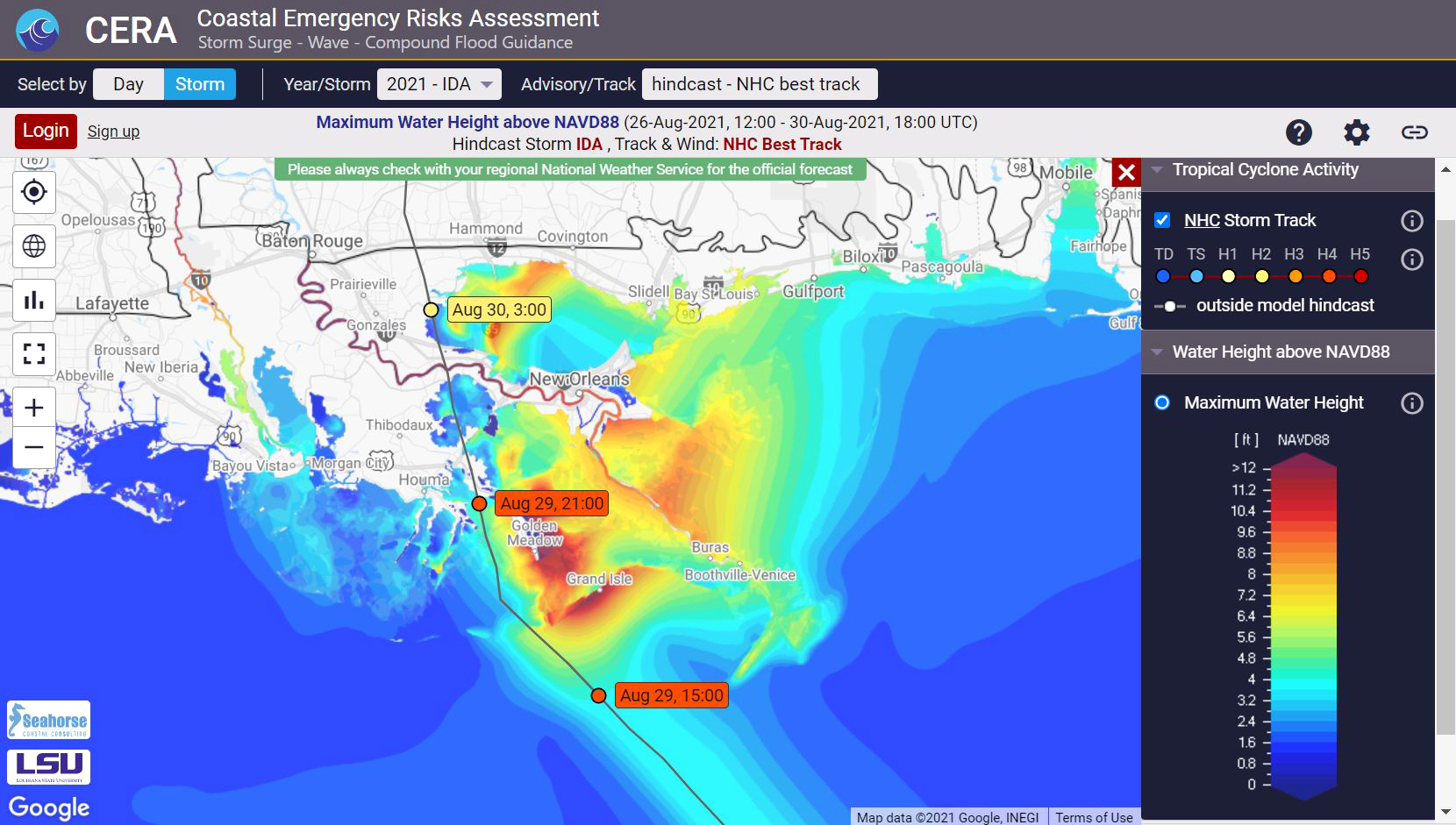 LSU’s Coastal Emergency Risks Assessment, or CERA, visualization tool shows thousands of emergency managers and first responders across Louisiana and the nation what they might expect ahead of dangerous storms. The image shows what CERA displayed for Hurricane Ida in August 2021. Ida made landfall as a strong category 4 hurricane near Port Fourchon, Louisiana—a critical energy hub. Over a million customers in the region were without power for days, weeks or longer.

Although coastal parishes and counties make up only one-fourth of the nation’s land area, they’re home to more than half of the U.S. population and generate most of the nation’s income. In Louisiana, where energy is the number-one industry, lives and livelihoods depend on how much of the nation’s critical energy infrastructure—located on or near the state’s coast—is at risk from coastal hazards, such as hurricanes and flooding.

The fate of Louisiana’s coastline and the future of its economy are closely linked, as evidenced by the U.S. Department of Energy’s recent investment in LSU research and a new interdisciplinary collaboration to improve storm and flood preparedness and mitigation, which is of urgent operational interest to multiple state and national agencies, including the Coastal Protection and Restoration Authority, or CPRA, U.S. Army Corps of Engineers, the National Oceanic and Atmospheric Administration, or NOAA, the U.S. Coast Guard, the Federal Emergency Management Agency and the Department of Homeland Security and Emergency Preparedness—all professional users of LSU’s CERA website.

Scientists make predictions about future events, including severe weather events, either through direct observation or by building models, which are increasingly computational, that mimic nature in significant—yet incomplete—ways, and then running simulations in those models. LSU’s CERA tool uses several models and supercomputers to help emergency managers and first responders across the nation visualize where storm water will go and how high it will rise during hurricanes and severe weather events. These models include the Advanced Circulation, or ADCIRC, surge guidance system, collaboratively developed by several universities; Global ESTOFS, or Extratropical Surge and Tide Operational Forecast System, from NOAA; and the more local CFIGS, the Compound Flood Inundation Guidance System by CE Hydro, which adds rainfall in the watersheds around Lake Pontchartrain, north of New Orleans and east of Baton Rouge.

A big challenge in computational coastal modeling is the inherent complexity and interdependence of constantly changing parameters. As seas rise and land either sinks, due to subsidence and erosion, or builds, due to sediment transport primarily by rivers, such as the Mississippi River, coastal models must be continuously adjusted using real-world measurements. In Louisiana and in the context of CERA, many of those measurements come from CPRA, which recently renewed its contract with LSU ahead of the current hurricane season. For close to 15 years, CPRA has increasingly relied on CERA in its decisions to open or close flood gates to protect Louisiana residents and assets.

“Every year, it gets better,” Harrouch continued. “I’ve been with the agency since 2014, and I will tell you, CERA has come a long way in the last two years. The accuracy of the model has been excellent. Also, in this business, there is no room for error. We have to be right, and AI may make our flood prediction even more accurate.”

On the local level, coastal emergency managers from Plaquemines to Cameron Parish use CERA to see and understand the potential impact of extreme wind and water, which helps inform road closings, evacuations as well as search and rescue operations.

Computational coastal modeling is about accurately representing water, wind, soil and sediment—all tangible yet dynamic—as ones and zeroes. It’s a considerable feat. An additional challenge for CERA is that it currently can display predictions by various models, but not all models at the same time. Because of differences in scale, it is difficult to translate and infer information from one model to another. Meanwhile, predictions would be much more detailed and accurate if all storm surge and flooding models could be improved, merged and cross-checked. This is why LSU is part of an ongoing project with University of Texas at Austin, University of Notre Dame and Pacific Northwest National Laboratory to couple coastal physics-based models using AI, a technology particularly adept at finding connection points and relationships between vast datasets. The three-year project, funded by the U.S. Department of Energy, or DOE, will couple ADCIRC, the high-resolution storm-surge-guidance model, with the DOE’s Energy Exascale Earth System Model, or E3SM, and involve both coastal and computational scientists.

On the LSU side, the lead researchers are Carola Kaiser and Hartmut Kaiser with the LSU Center for Computation & Technology (CCT). Carola Kaiser leads the software and web development of CERA while Hartmut Kaiser leads the LSU STEllAR research group, which works to improve the speed and efficiency of high-performance computing through the design and implementation of HPX, a C++ runtime system for distributed and parallel computing of which the STEllAR group is the lead developer. Through a previous project, called Phylanx, funded by the U.S. Department of Defense, Hartmut Kaiser worked to create new computational infrastructure that improves the performance of AI and machine learning in supercomputers and distributed systems—knowledge he now will use in the current DOE project, which will leverage the newly state-funded, $12.5 million LSU AI supercomputer for Louisiana.

“When people start talking about artificial intelligence and machine learning, they often talk about the concrete problems they’re using these technologies to solve,” Hartmut Kaiser said. “Few actually worry about the computational infrastructure itself and what we need to solve these really large problems—how to train neural networks faster and make sure we make excellent use of these big and powerful machines.”

The new DOE-funded project, called Multiphysics Simulations and Knowledge discovery through AI/ML, or MuSiKAL, will use the already-established infrastructures of HPX and CERA to improve the existing models and come up with a new, AI-driven model that will source from, and connect, the others. The LSU researchers’ goal is to produce even more accurate and detailed storm surge and flood predictions for Louisiana. 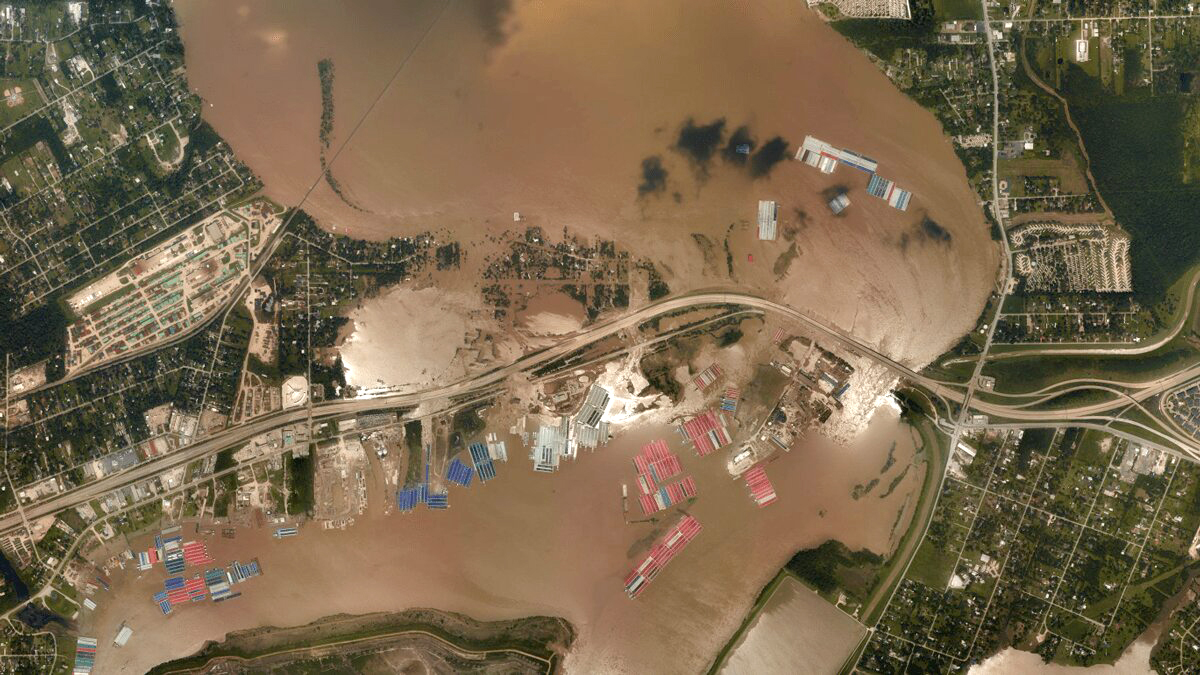 “CERA, as a visualization tool and user interface, allows us to easily organize and access this very complex data and quickly validate and improve the models,” Hartmut Kaiser said. “You can think of it as a feedback loop, where we use real historic storm data to train the AI and then have it run simulations on real events. We can then compare the simulated data with real data. This way, we can quickly verify the quality of the models and improve their performance, perhaps by adding additional parameters.”

For major storms, CERA relies on National Hurricane Center data to create both forecasts, or  theoretical predictions, and hindcasts, which show what actually happened.

“For us, this project is an opportunity to bring all of these pieces together,” Carola Kaiser said. “CERA can help build trust in the models, because you need to have a tool that people can look at and say, ‘Okay, this looks reasonable,’ or, ‘No, we need to put in more work.’ MuSiKAL will add to CERA’s existing capabilities and make it easier for us to plug in additional models and deliver results to the end users who depend, down to the hour and minute ahead of dangerous storms, on the best possible flood hazard guidance we can provide to protect our coastal communities.”

CERA has always relied on supercomputers to run complex models. Historically, this forecasting has been an iterative process of solving systems of differential equations that describe what happens in nature. The data is so complex that a single run can take several hours, even on a supercomputer. Hartmut Kaiser, Carola Kaiser, and their collaborators now hope to significantly speed up this process, thanks to AI. Instead of spending time solving differential equations as new data comes out from the National Hurricane Center, the researchers will spend time training their AI with data from previous storms. After sufficient “education,” the AI should be able to provide near-instant forecasts.

“Our hope, essentially, is to trick the laws of nature by redistributing time,” Hartmut Kaiser said. “By investing our time in training the AI, we won’t have to invest so much time into each simulation during a storm event. That’s the power of AI.”