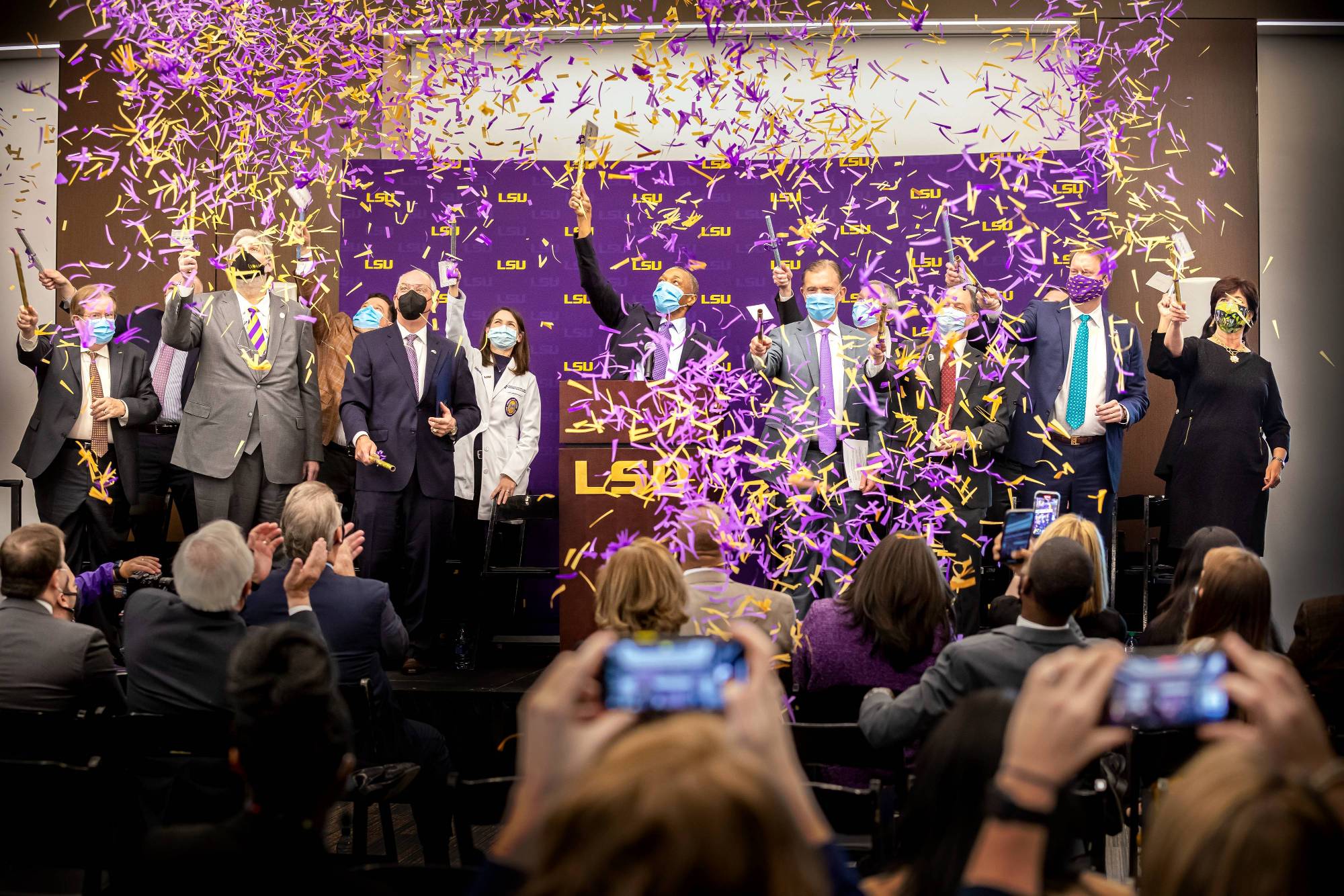 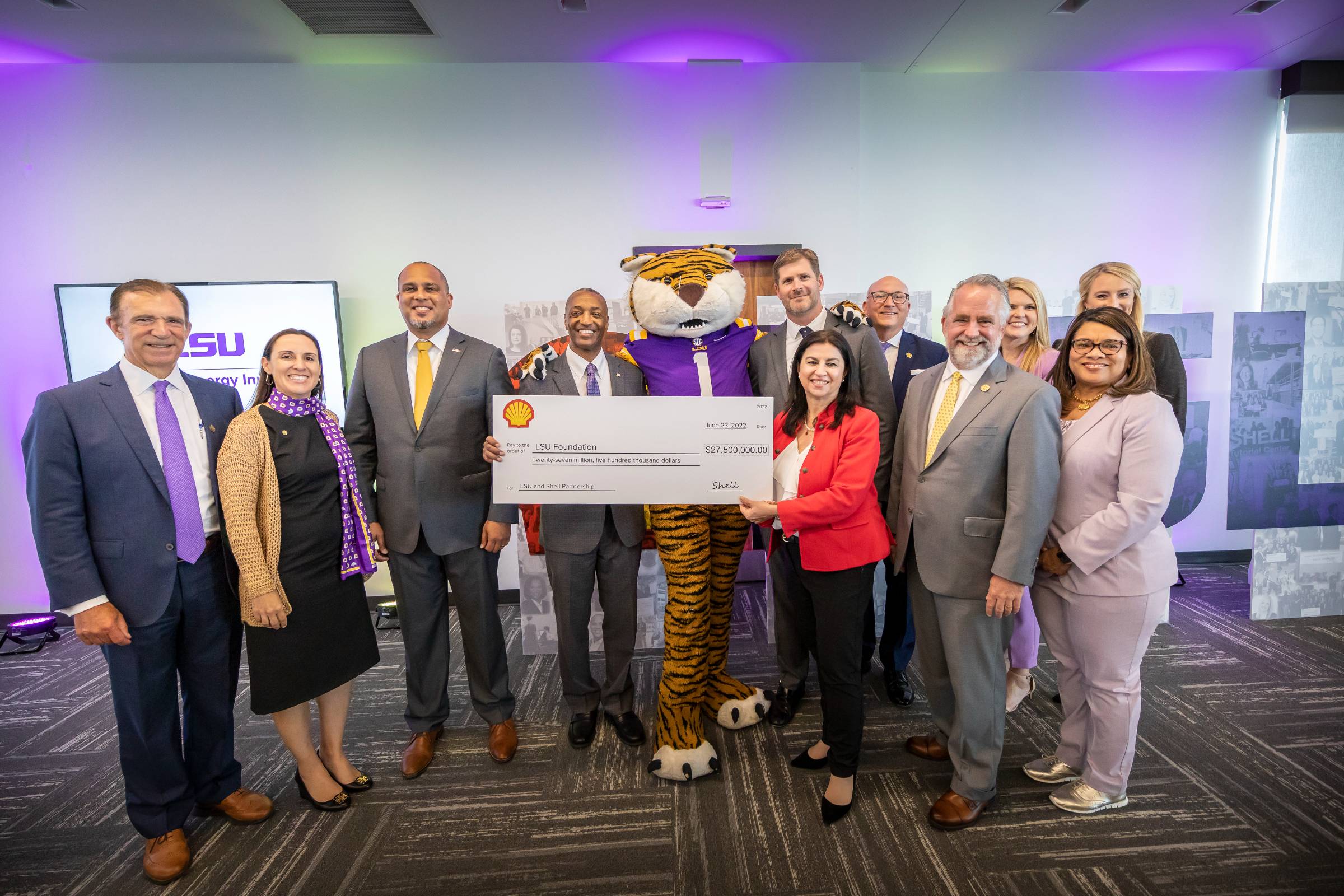 BATON ROUGE – Thanks to LSU donors’ generosity, the university’s $1.5 billion Fierce for the Future Campaign reached $1,594,464,658 as of June 30, 2022, surpassing the campaign goal three years earlier than anticipated. LSU will immediately move forward with preparing for its next campaign, focused on advancing the university’s Scholarship First Agenda developed under LSU President William F. Tate IV’s leadership.

The Fierce for the Future Campaign, which publicly launched three years ago, united donors in support of every LSU campus: the flagship campus in Baton Rouge, the LSU AgCenter, LSU of Alexandria, LSU Eunice, LSU Health New Orleans, LSU Health Shreveport, LSU’s Pennington Biomedical Research Center and LSU Shreveport. At that time, it was the largest fundraising campaign for higher education in the history of Louisiana and the first to include LSU’s campuses statewide. More than $1 billion (i.e., 68 percent) of campaign gifts were in support of academics and 32 percent were in support of athletics.

Tate said, “The success of LSU’s $1.5 billion Fierce for the Future Campaign – and particularly the achievement of surpassing the campaign goal three years early – exemplifies our donors’ tenacity for joining with LSU to elevate Louisiana and drive global impact. Just as was envisioned, this campaign has positioned LSU to set its course for the future. Now, we are aggressively pursuing that course through LSU’s Scholarship First Agenda.” 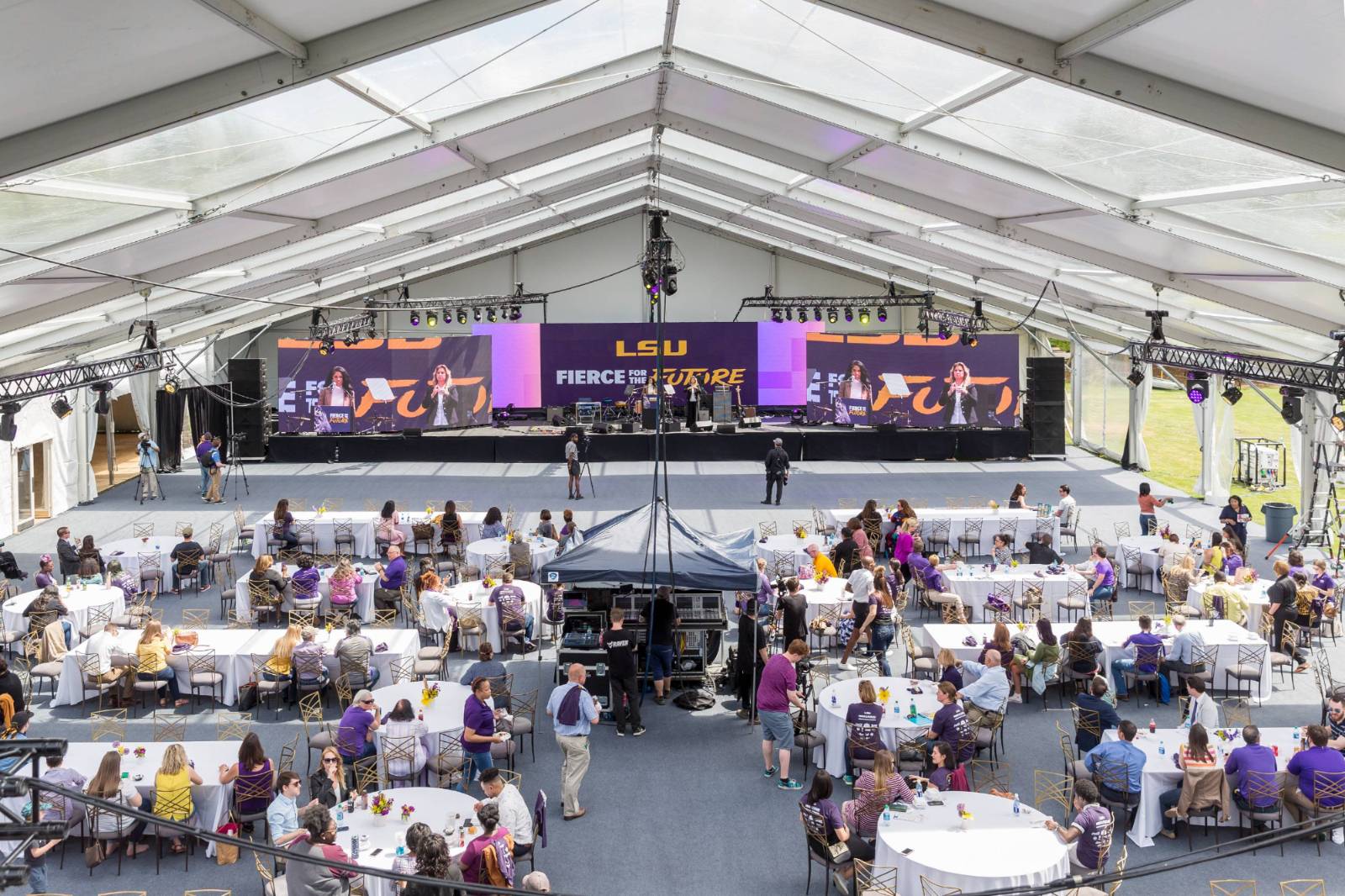 LSU launched the Fierce for the Future Campaign in March 2019, and just three years later, surpassed the $1.5 billion campaign goal.

The Fierce for the Future Campaign recognized that Louisiana’s most urgent and compelling concerns cannot be solved without the human capital LSU provides, and that addressing those concerns necessitates transformative philanthropic partnerships and the collective impact of donors at all levels investing in LSU. Each of LSU’s campuses identified Fierce for the Future Campaign fundraising priorities that are generating solutions for the people in Louisiana and making profoundly positive impacts around the world. Connecting these priorities is LSU’s deep commitment to positive transformation of opportunity, resources and well-being for all – from providing an accessible, affordable, outstanding education to leading life-changing research and outreach that blazes trails and pushes boundaries.

LSU met or exceeded its Fierce for the Future Campaign goals and projections, as detailed below and identified by each campus at the outset of the campaign. Throughout the LSU System, donors partnered with the university to invest in their areas of passion and to align with individual and corporate impact goals. The leading campaign commitment was a historic $245 million investment from Our Lady of the Lake ($170 million) and LCMC Health ($75 million) to transform healthcare in Louisiana. 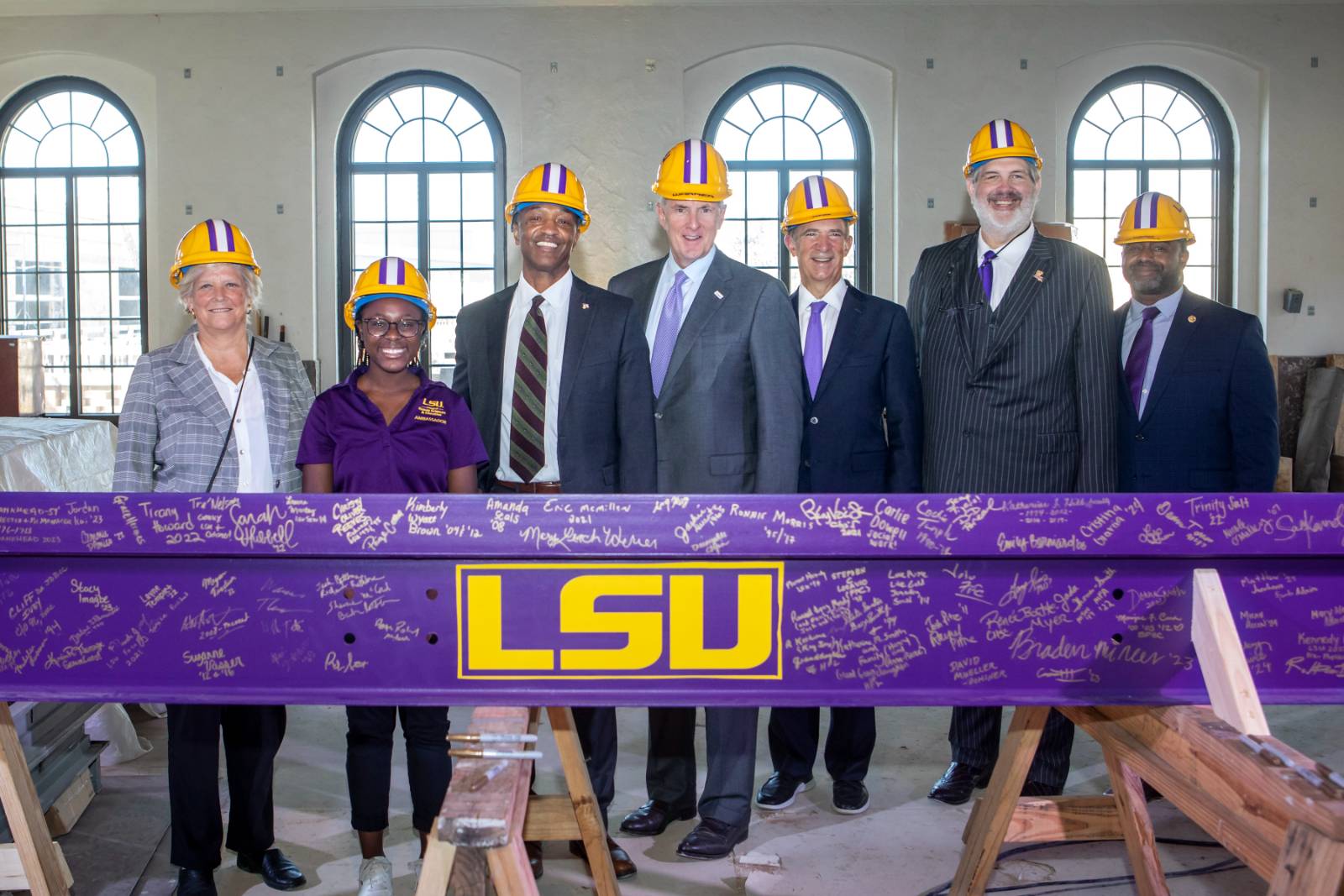 A beam-signing ceremony was held on Oct. 28 to celebrate the renovation of the Huey P. Long Field House. Individuals were able to leave their mark on history by signing the final beam to be placed in the building.

Approximately $1.3 billion of campaign gifts were in support of the Flagship Campus in Baton Rouge and the LSU AgCenter.

Overall, donors gave $796.5 million in support of academics on the Baton Rouge campus, contributing $421.3 million through the LSU Foundation (including $15.6 million in support of the LSU AgCenter) and $375.2 million directly to the university (including $12.8 million in support of the LSU AgCenter). Direct-to-LSU support was largely via companies’ in-kind gifts of proprietary software – affording LSU students, faculty and staff access to best-in-class technology to enhance curricula and advance research – and Our Lady of the Lake’s investment to develop an end-to-end healthcare experience within the LSU Student Health Center and provide in-kind care to uninsured and underinsured LSU students. 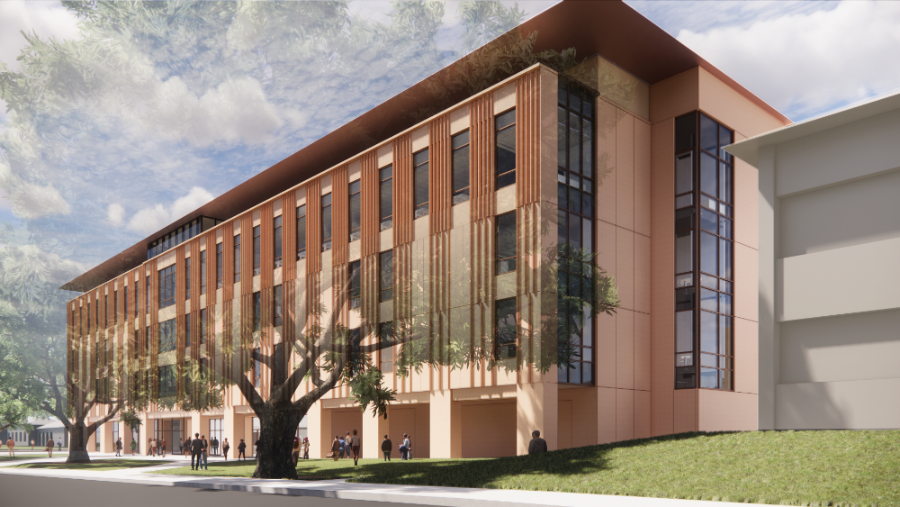 Signature athletic campaign projects included a historic sports medicine partnership with Our Lady of the Lake; renovations to the LSU Football Operations Building; the opening of the Marucci Performance Center at Alex Box Stadium; enhancements and maintenance for Mike the Tiger’s habitat; and the Skip Bertman statue at Legacy Plaza. Overall, donors gave $502.4 million in support of athletics on the Baton Rouge campus. Campaign contributions totaled $358.1 million through the Tiger Athletic Foundation, including $188.6 million for premium- and priority seating-related contributions required for season ticketing, and $144.2 million through LSU Athletics’ Tradition Fund for priority seating-related contributions required for season ticketing.

Health and Biomedical Campuses and Initiatives

Commitments to advance health-related initiatives at LSU included – as part of the $245 million combined investments by Our Lady of the Lake and LCMC Health – $50 million from LCMC Health to pursue the vision for ascending the LSU Health New Orleans/LCMC Health Cancer Center to an NCI-Designated Cancer Center; $20 million from Our Lady of the Lake to expand and strengthen programs within the LSU School of Medicine New Orleans’ Baton Rouge branch campus; and $10 million from LCMC Health to create a scholarships- and programming-focused support framework for pre-nursing students on the Baton Rouge campus and nursing students on the LSU Health New Orleans campus.

Signature LSU Health New Orleans campaign projects included a donation of 29 acres of land on the Northshore of New Orleans to create an economic growth-driven retirement community and to dedicate and restrict more than $20 million in cancer research funding from the related land lease revenue. Overall, donors gave $77.8 million through the LSU Health Foundation New Orleans. 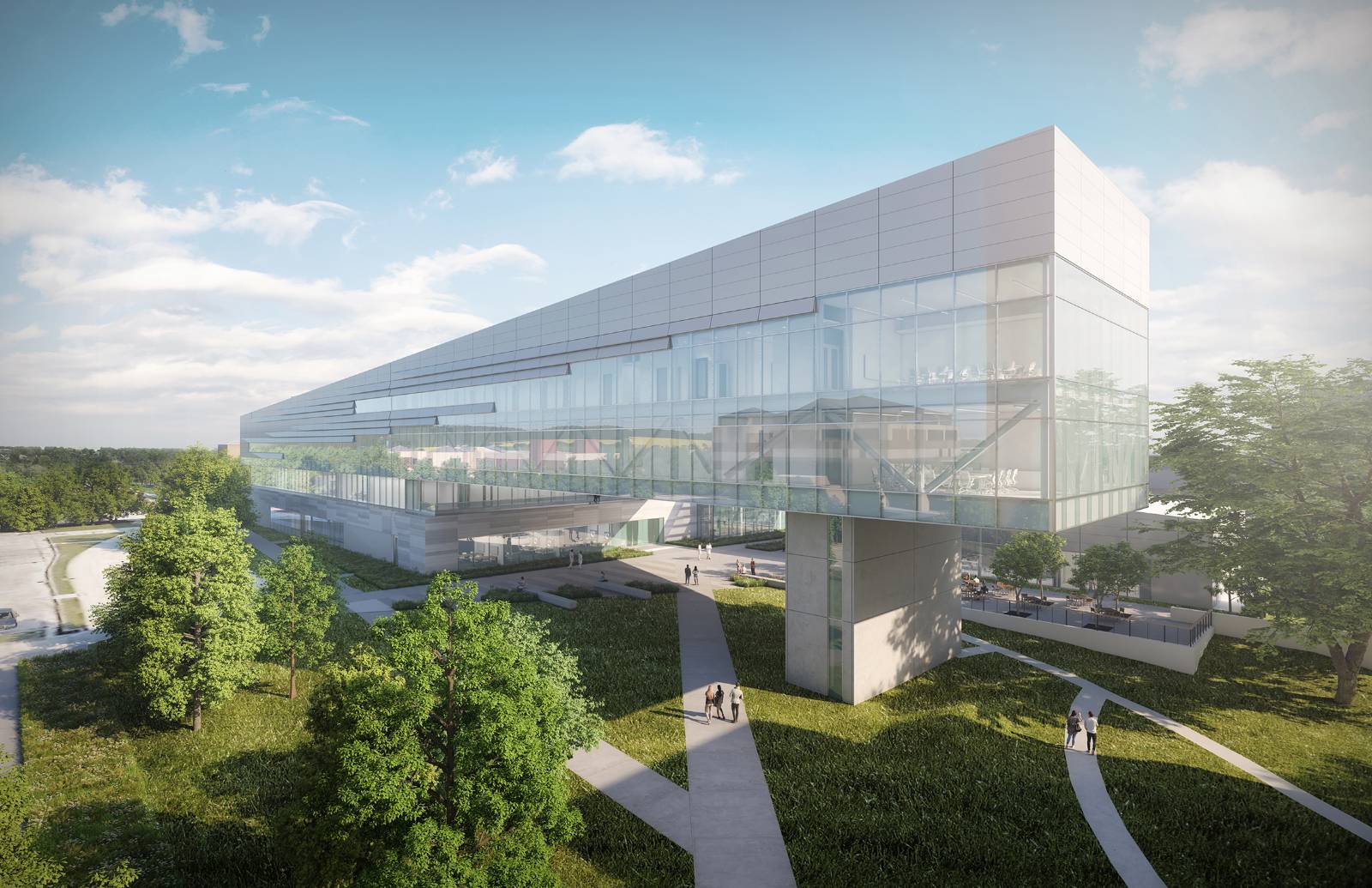 Signature Pennington Biomedical Research Center campaign projects included a new Cancer Metabolism Program created with the help of local philanthropist Art Favre and making Pennington Biomedical one of the leading authorities in the world for cancer metabolism research; the launch of the worldwide Obecity, USA, the Current State of America awareness campaign, supported by donors including Annette Barton, Paula and Jacques de la Bretonne, Charles and Carole Lamar, Art Favre, the Irene and C. B. Pennington Foundation, the Lamar Advertising Company and the Baton Rouge Area Foundation; and a new, nation-leading Bariatric and Metabolic Institute supported by Gary and Claudia Phillips and Charlie and Carole Lamar and leveraging investments from Pennington Biomedical, Our Lady of the Lake Regional Medical Center, LSU Health New Orleans, the Office of the Governor and Louisiana Economic Development. Overall, donors gave $16.4 million through the Pennington Biomedical Research Foundation. 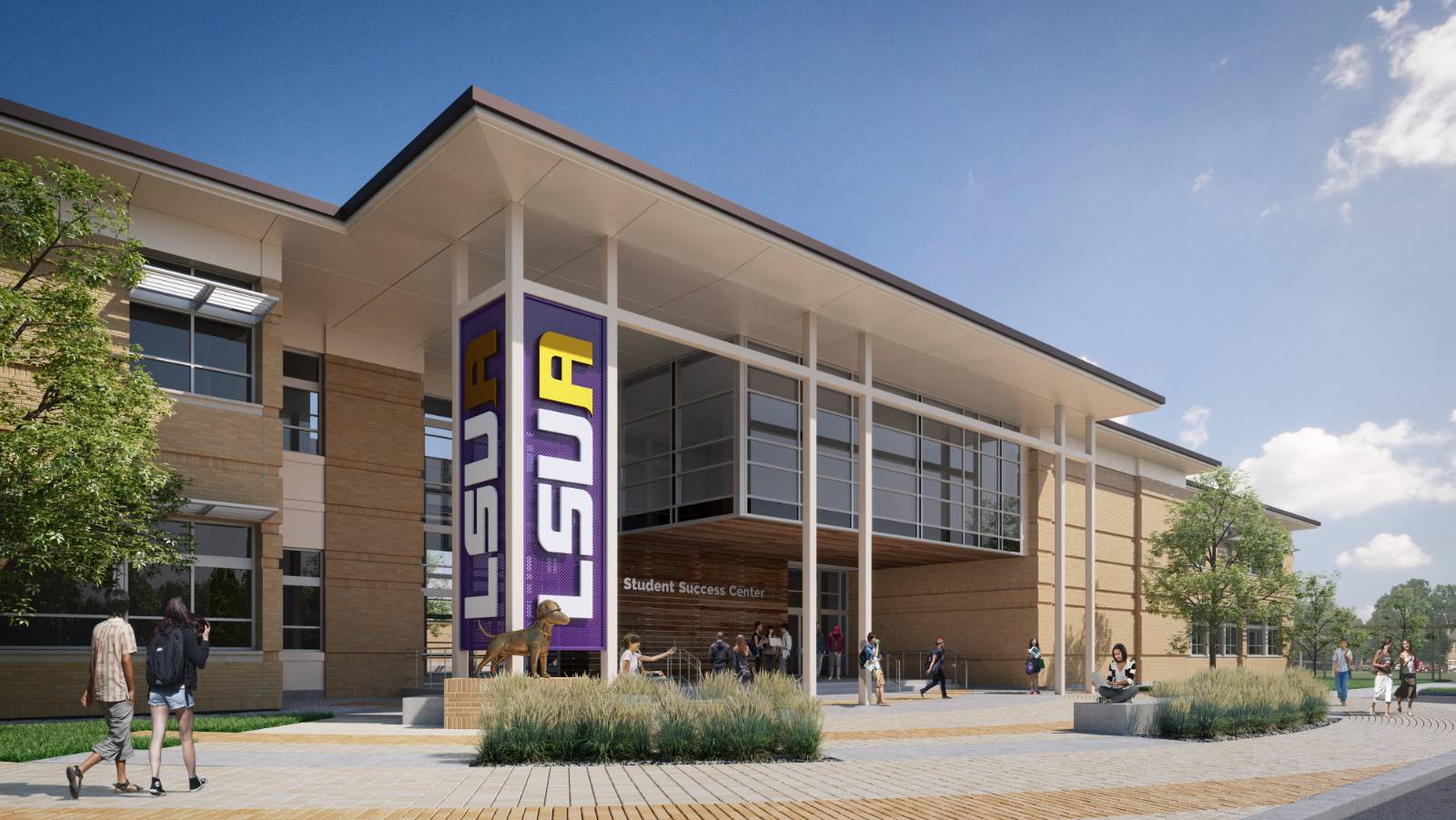 Donors gave $14.3 million through the LSUA Foundation in support of LSU of Alexandria. Signature LSU of Alexandria campaign projects included the Student Success Center, supported through a $3.5 million multi-campus leadership gift by the company RoyOMartin and LSU alumni Roy O. Martin III and Kathy Kilpatrick Martin that included support for the top capital priorities on the Baton Rouge, LSU Health Shreveport and LSU of Alexandria campuses; Cleco’s support of LSUA’s Accountants for the Future Initiative; and LSUA alumnus Darrel Ryland’s gift to create an endowed scholarship for local students. Also supporting the Student Success Center with a leadership gift was Charlie Weems, an emeritus member of the LSUA Foundation Board of Directors. 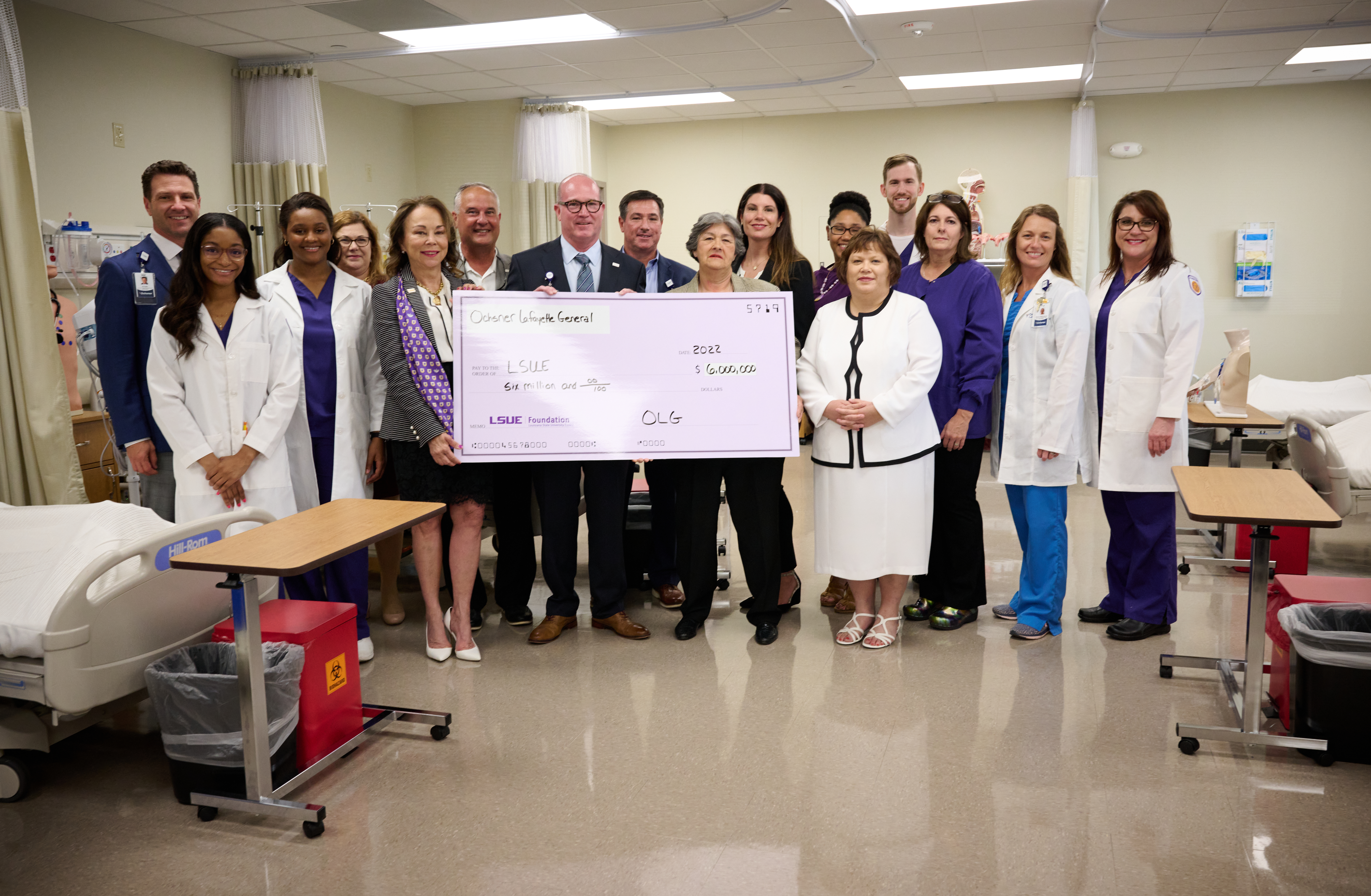 The Fierce for the Future Campaign was LSU’s third advancement campaign. The LSU Campaign launched April 18, 1997. In February 1999, the campaign reached its $150 million goal – more than two years ahead of the targeted date of June 30, 2001. Ultimately, donors gave $255 million to the LSU Campaign, exceeding the original campaign goal by 70 percent. In 2006, LSU publicly launched the Forever LSU Campaign, inclusive of the Tiger Athletic Foundation and LSU Alumni Association. In a historic show of generosity, more than 50,000 LSU alumni, friends and corporations united to surpass the Forever LSU campaign’s $750 million goal, contributing $764 million by Dec. 31, 2010; an additional $34 million in state-matching funds brought the final total to $798 million.