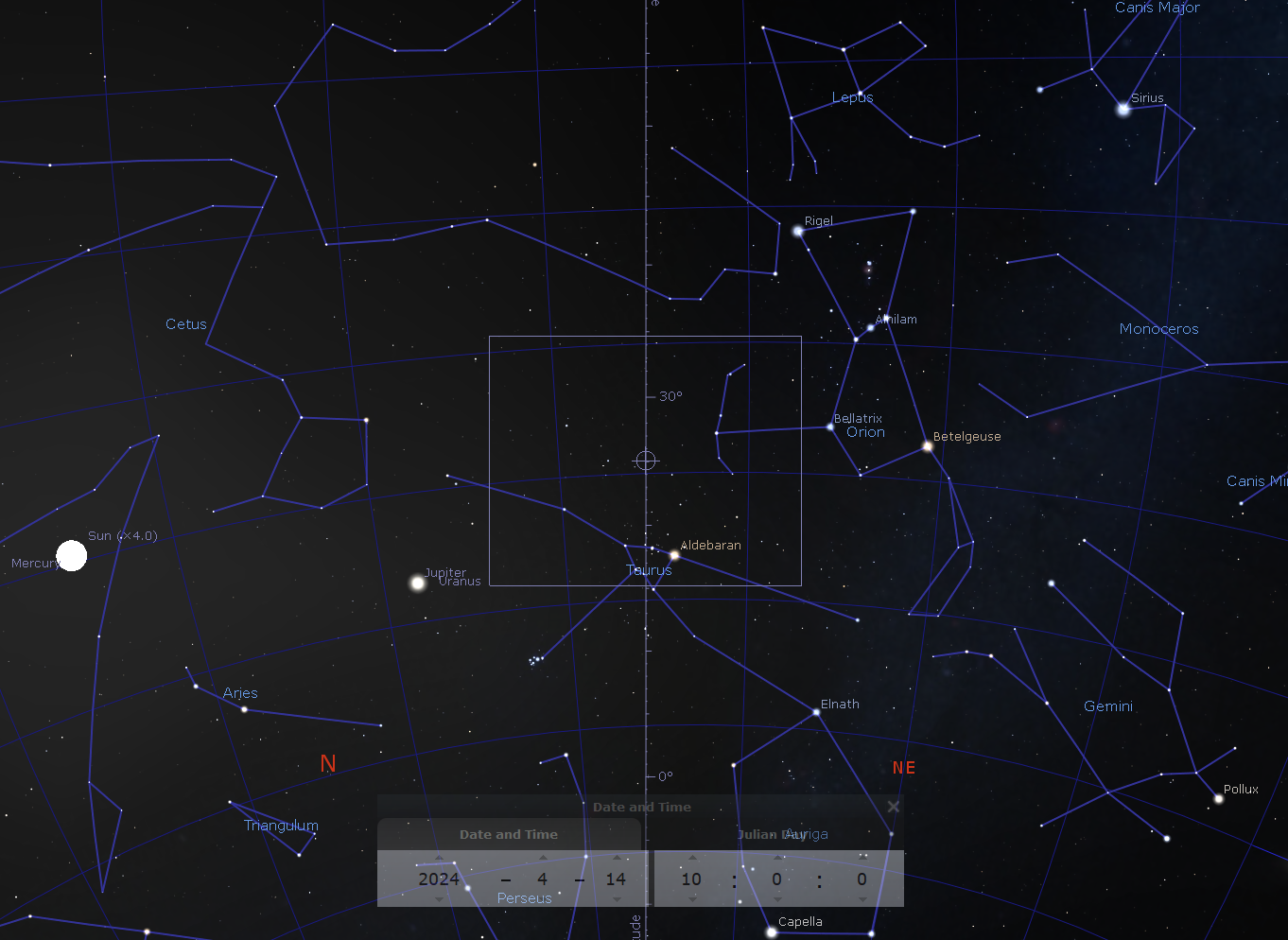 The projected field of view of the lunar telescope and camera from the moon's Schrodinger Basin on April 14, 2024. The camera will collect new images and data of the night sky from the far side of the moon, especially looking for exoplanets and asteroids.

LSU astronomers are leading a collaborative scientific observing program that will provide new images and information from the far side of the moon. LSU Department of Physics & Astronomy Assistant Professors Tabetha Boyajian and Matthew Penny have recruited a team of students, who are working on the design of the first lunar-based camera, or L-CAM1, that aims to launch in 2024.

“Giving early career students the chance to design a frontier, space-based science program that will be operated on the lunar surface is a wonderful and unique opportunity to support the progression of tomorrow’s leading astronomers and astrophysicists.”

L-CAM1 is a collaboration between AstronetX PBC, a public benefit corporation dedicated to enabling frontier research from space, and faculty and students from LSU, Mississippi State University and the SETI Institute. The AstronetX L-CAM1 instrument is designed to acquire cosmic images for research spanning astrophysics, planetary science and planetary defense.

“Working on L-CAM has been a dream come true for me. I’ve been an astronomer since I was 13, and now I’m developing the science program for a lunar surface telescope. This is a frontier science project, starting with getting to speak with the engineers and discussing how the different camera designs being considered will influence the data we’ll capture,” said Farzaneh Zohrabi, L-CAM1 graduate student science team member studying at LSU. “A unique thing that we’re planning to do with L-CAM is make really precise measurements of nearby bright stars and their exoplanets. This is something that cannot easily be done using ground-based telescopes on Earth because of the atmosphere and saturation limits.” 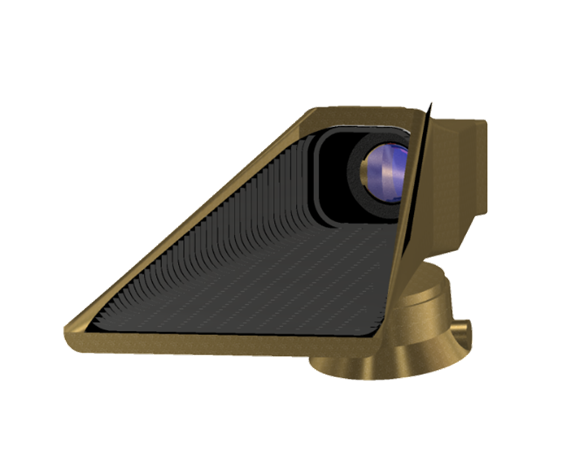 A rendering of the L-CAM1 telescope.

The scientific program planning has been funded by a grant from the Gordon and Betty Moore Foundation to AstronetX, with additional support for student participation provided by the National Science Foundation’s Research Experiences for Undergraduates program at LSU.

“Our student team has gotten first-hand experience with how missions evolve and had the opportunity to plan a science program from scratch. This began with leveraging their diverse backgrounds to consider the potential science cases for a lunar-surface based observatory. The team also had to face and respond to the kinds of real-time, real world challenges that occur during the mission design phase. This forced them to learn how to think flexibly and respond dynamically to changes. This experience will serve them well throughout their careers,” Boyajian said.

Beginning with developing an understanding of the benefits and limitations of a lunar observatory, two primary science cases were selected for the observing program:

Space-based observations allow high-precision measurements of parent star brightness changes when an orbiting exoplanet briefly passes in front of the star. The brightness changes can be a few percent for large exoplanets, down to less than 100 parts per million for rocky exoplanets similar in size to Earth. Working continuously during a lunar day, which is about 14 Earth days, L-CAM1 data will have long, uninterrupted observing sequences of exoplanet transit events, allowing scientists to target specific systems and capture new data that can be used to determine properties of both the exoplanets and their host stars.

Approximately 200 asteroids will be observable by L-CAM1 during a multi-lunar day mission, including approximately 1 near Earth asteroid per month. The combination of lunar day length and the stable platform the lunar surface provides will enable precise position, or astrometric, and brightnesss, or photometric, observations for determining the physical properties and orbits of these small solar system bodies.

“Our student team first needed to create simulations of the portion of lunar sky L-CAM1 will see during the multiple lunar days of the mission as a way of determining visible astrophysical and astronomical targets. One of the unique benefits L-CAM1 will provide is the duration of uninterrupted time individual subjects can be observed,” said Franck Marchis, senior planetary astronomer at the Carl Sagan Center at SETI.

The long-duration and precise light curves of stars and asteroids may enable detection of exomoons orbiting the exoplanets or moons orbiting their host asteroids. The light curves of transiting exoplanets captured by L-CAM can also detect a phenomenon called transit timing variations, which occur due to the gravitational tug of additional objects orbiting the host star being observed. Scientists using L-CAM1 will similarly be able study the light curves of near-Earth asteroids over longer durations to better characterize orbital parameters and rotational spin, contribute to advanced 3D modeling, and identify transiting asteroid moons.

“Because of my data science background, the initial challenge presented to me was to think about how we can map all the known exoplanets and their hosts in order to identify will be observable L-CAM1’s landing site,” said Carol Miu, L-CAM1 undergraduate student science team member at Collin College, who conducted this research over the summer at LSU. “I wrote a script that uses the Stellarium planetarium to determine what stars and known exoplanets will be in our planned field of view at specific times and matched the results against NASA’s exoplanet archive data to determine orbital periods and our list of candidate targets.”

After initial science targets had been selected, alternate mission schedule and landing locations for L-CAM1 were considered, requiring additional analysis to modify the list of targets. The team was able to step back and consider ways in which programmatic changes or a multi-mission program can be efficiently designed while minimizing rework. The student team also had to design a data acquisition strategy constrained by transmission limitations from the Moon to Earth for analysis.

“My focus began with determining where we should be looking by using the Stellarium planetarium and other software to model the night sky. This enabled us to put together a list of candidate host stars and exoplanets for observation.” said Connor Langevin, L-CAM1 undergraduate student science team member studying at LSU. “More recently, I’ve started to identify the observability of near-Earth asteroids. This involves determining L-CAM’s field of view at specific times and matching that with specific asteroids that will be viewable.”

This hands-on learning process will serve these astronomy students well throughout their careers, Boyajian said.

“L-CAM has several advantages. The lack of atmosphere on the lunar surface, compared to ground-based telescopes for deep space science, will provide a higher level of precision, there will be longer continuous observation windows due to the two-week long lunar day, and we will be able to observe areas closer to the sun than we can from Earth,” said Jonas Kluter, L-CAM1 postdoctoral researcher science team member at LSU.

AstronetX is a Delaware public benefit corporation, headquartered in Boston, Massachusetts, established to enable research in the Earth and space sciences for the benefit of humanity by making multi-purpose, space-based observational and database services available to customers spanning the space science community, government agencies, the private sector, and citizen scientists. For more information, visit www.astronetx.com or email press@astronetx.com.