Predicting Where the Water Will Go

Ahead of Hurricane Ida and throughout last year’s record-breaking hurricane season, more people than ever turned to LSU’s Coastal Emergency Risk Assessment (CERA) tool, which visualizes storm-surge predictions, to help protect communities and assets from flooding. The tool helps key decision-makers see where the water will go, and how high it will rise. By using CERA, they can be faster and more accurate in issuing evacuation orders and choosing where to position resources as well as when to open or close flood gates. From Louisiana’s local emergency managers to federal officials, leaders across the nation looked to LSU’s experts and the technology they’ve helped develop.

“As an emergency manager, you look for every piece of information at your disposal,” said Windell Curole, general manager of the South Lafourche Levee District. “And when you make your call, more than a day ahead of landfall, and you’re telling people to evacuate or open or close flood gates—you’d better be right.”

He and thousands of other emergency managers along the Gulf Coast and Atlantic Seaboard have come to rely on CERA to help make some of their most critical decisions in guarding local populations against storm surge. LSU has received new login requests from the White House, FEMA, NASA, the U.S. Army Corps of Engineers, Coast Guard, Marine Corps, Navy, and the Departments of Defense, Homeland Security, Transportation, and Health & Human Services, as well as local levee districts.

“You have to understand—all flooding is local,” Curole continued. “And you have to mix the best technological information with real, on-the-ground information. You’ve got to bring in reality. Only that way can you turn knowledge into wisdom.”

To do exactly that, LSU works closely with the Coastal Protection and Restoration Authority (CPRA) and other partners to combine the most recent elevation data with state-of-the-art computational modeling. 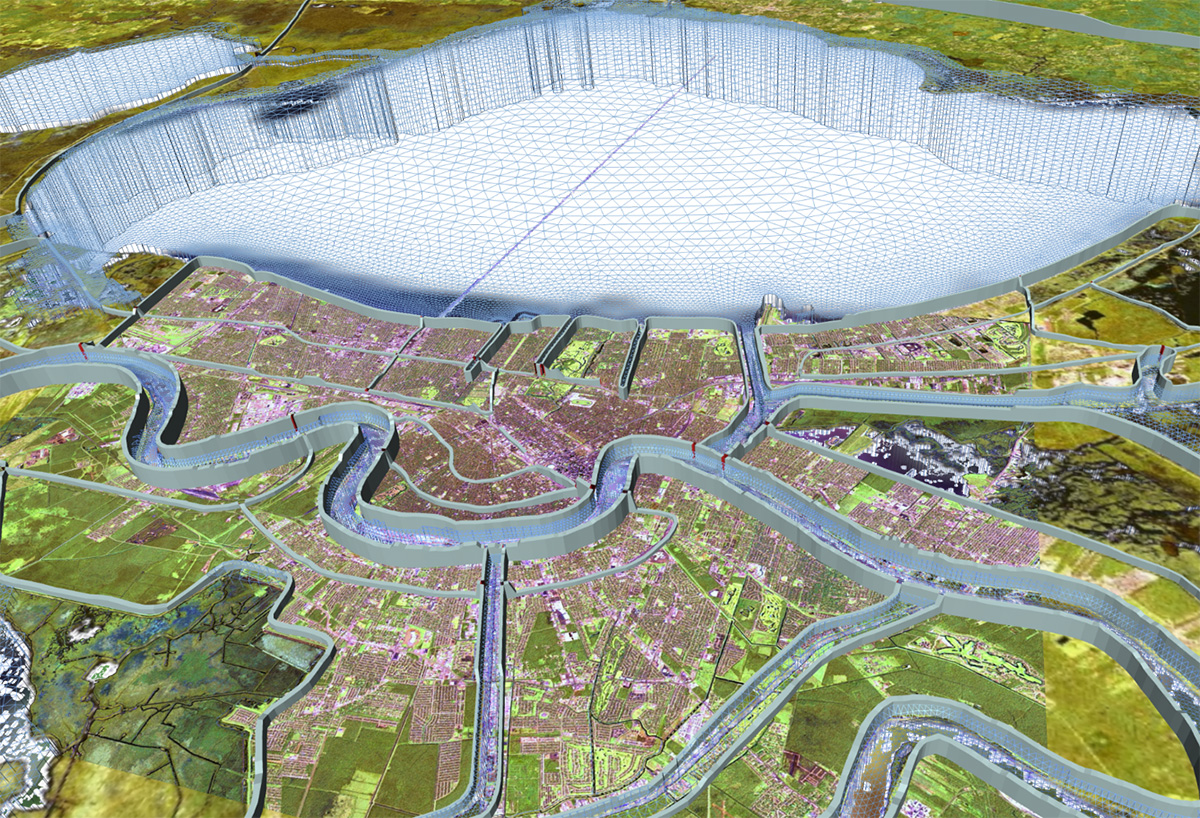 The need for better storm surge forecasting was made obvious after Hurricane Katrina, which flooded large parts of New Orleans. The LSU research effort grew from that and by public demand—emergency managers and planning commissions wanted not just federal levees on the map, but all structures that also happen to be in a constant state of change, requiring continuously updated measurements and local knowledge. To this end, LSU collaborates closely with the Louisiana Coastal Protection and Restoration Authority (CPRA), which not only gathers on-the-ground data for the university-driven forecasting effort, but uses its output to advise tide and flood gate operators across the state. Above, New Orleans as seen through the three-dimentional mesh LSU is building along with its partners to help predict where the water will go.

“[LSU’s] CERA tool is very important to CPRA—not only for operation of hurricane risk-reduction systems, but also for the prepositioning of flood-fighting assets. Keeping the model as up-to-date as possible is key, and this is why CPRA continuously collects and shares bathymetric and topographic data with LSU to facilitate continued improvement of the model.”