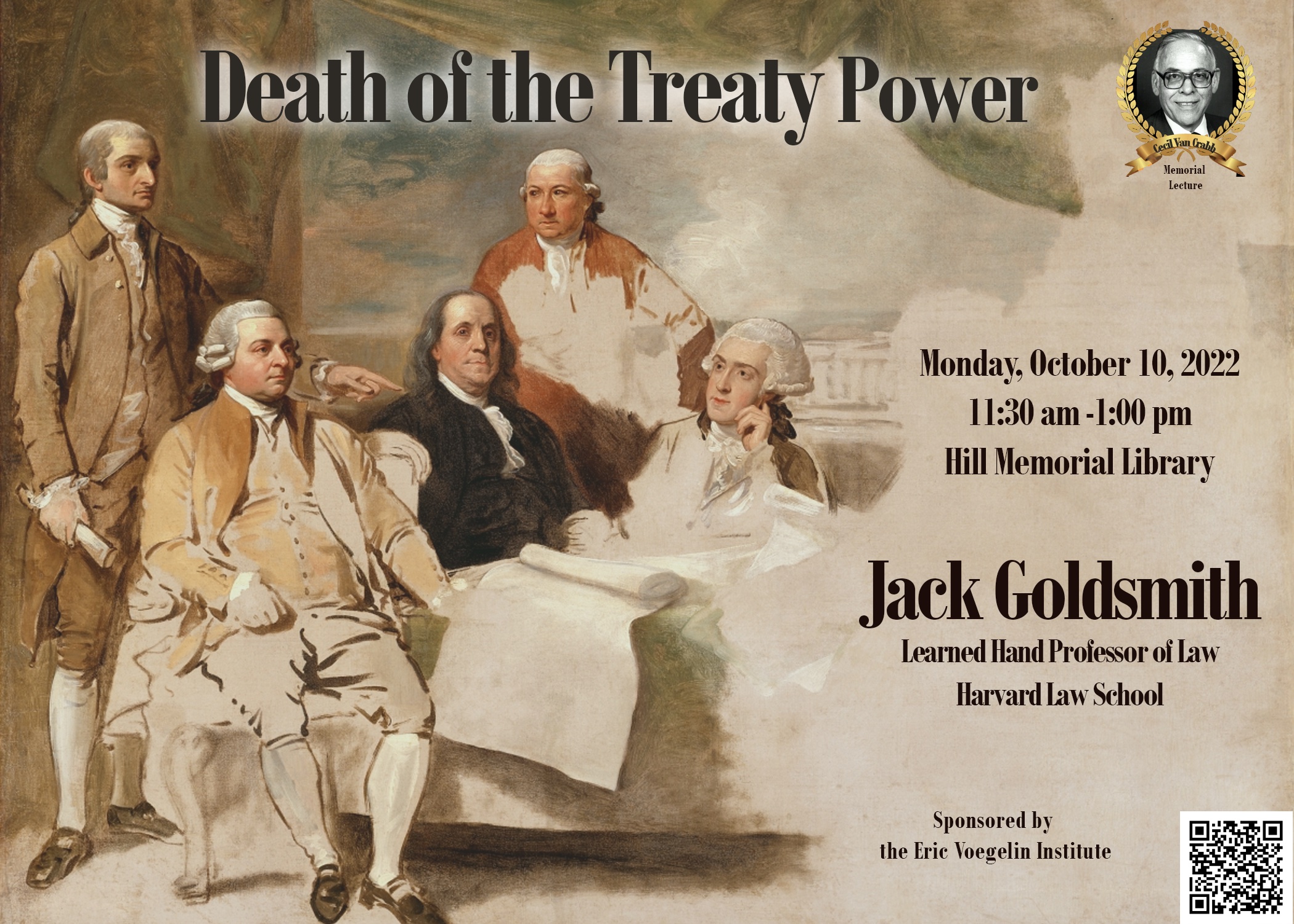 Jack Goldsmith of Harvard Law School will deliver “Death of the Treaty Power” on Monday, Oct. 10, in Hill Memorial Library.

BATON ROUGE – Jack Goldsmith of Harvard Law School will deliver a lecture titled “Death of the Treaty Power” on Monday, Oct. 10, at 11:30 a.m. The lecture, named for the late Cecil “Van” Crabb, who taught Political Science at LSU for many years, will take place in Hill Memorial Library and will include a zoom option for remote viewing. This event, which is free and open to the public, is sponsored by the Eric Voegelin Institute and is made possible by a gift from Crabb’s longtime colleague and sometime co-author Kevin V. Mulcahy.

Goldsmith is Learned Hand Professor of Law at Harvard University, a Senior Fellow at the Hoover Institution and co-founder of the Lawfare blog. He specializes in presidential power, national security law, federal courts, conflict of laws, international law and internet law. Educated at Washington and Lee University and Oxford University, he earned his J.D. at Yale Law School. Before coming to Harvard, Goldsmith served as the United States Assistant Attorney General in the Office of Legal Counsel and as Special Counsel to the General Counsel in the Department of Defense. He is the author of “After Trump: Reconstructing the Presidency” and “In Hoffa’s Shadow: A Stepfather, A Disappearance in Detroit, and My Search for the Truth,” as well as other books and articles on many topics related to presidential power, terrorism, national security, international law, and internet law.

The lecture is held in memory of Cecil “Van” Meter Crabb, who taught as a professor of Political Science at LSU from 1968-1993. Crabb served in World War II and later earned his Ph.D. in political science and international relations from the Johns Hopkins University. He was the chair of LSU’s political science department from 1968-1978 and later served as a graduate advisor in the department. The author of several books, Crabb studied doctrines in foreign policy, nonalignment in Middle Eastern affairs, and national security.

“I think our late colleague, ‘Van’ Crabb, would be pleased that Jack Goldsmith will deliver the lecture held in his honor,” said James Stoner, director of the Voegelin Institute, “for both hold that America’s place in the world is intimately tied to the character of our political institutions. The reflections of a leading scholar on the constitutional challenges entailed in American engagement in world politics should be a fitting tribute to a scholar who helped form LSU’s political science department and helped shape a generation of students.”

The Voegelin Institute, named for one of LSU’s original Boyd Professors and a scholar of international recognition and acclaim, is a humanities and social sciences research institute devoted to the revitalization of teaching and understanding of the “great books” of Western civilization in comparison with other traditions.