A Child of Darkness

LSU archaeologist discovers the first partial skull of a child of an early human ancestor from about 250,000 years ago

A photo of a cranial fragment of the ancient skull of a child of early human ancestor, Homo naledi, that was found in the Rising Star cave in Johannesburg, South Africa. 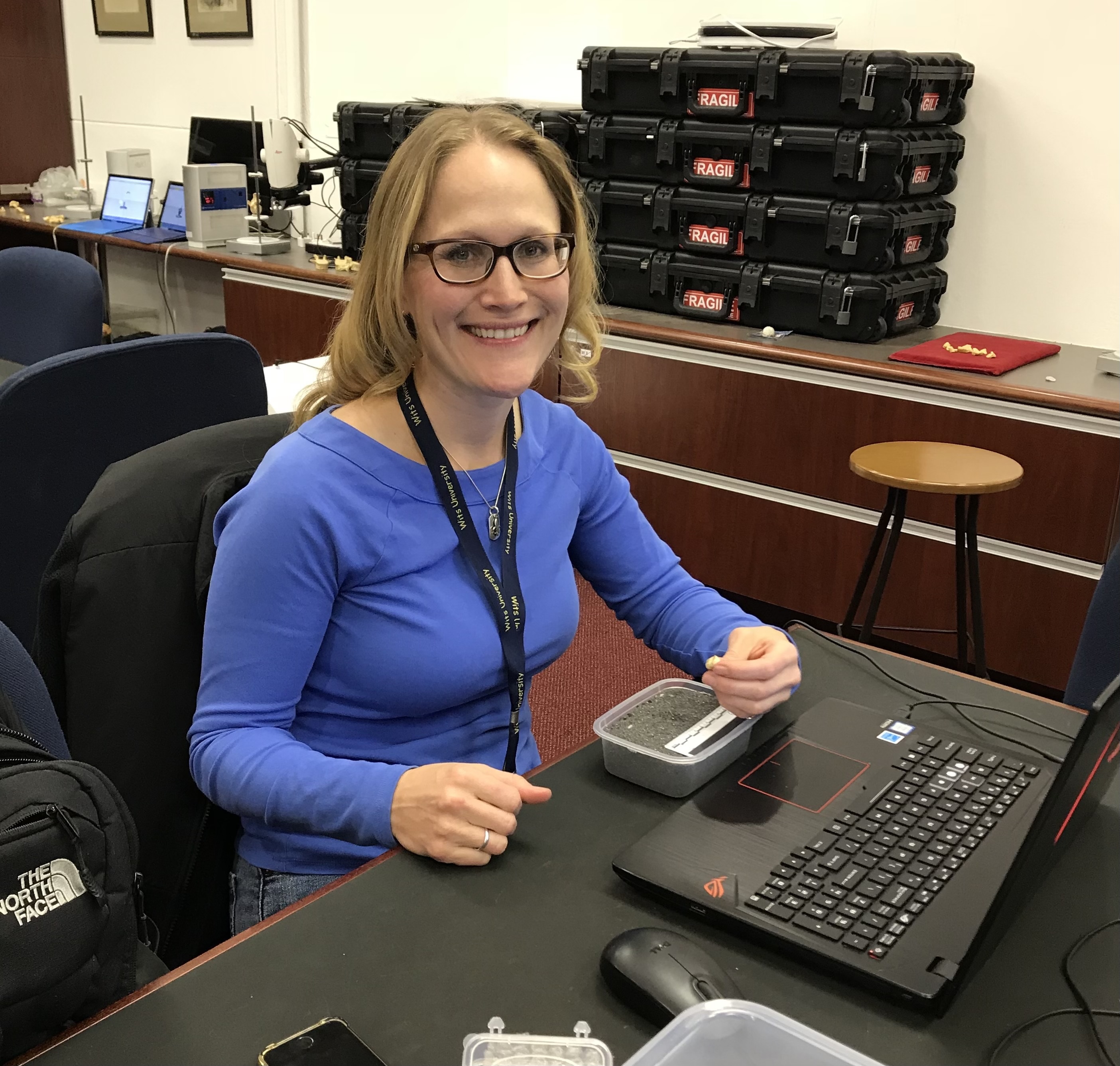 LSU Geography and Anthropology Associate Professor Juliet Brophy in the "tooth booth" lab at the University of Witwatersrand.

BATON ROUGE – An international team of researchers has revealed the first partial skull of an ancient human relative, Homo naledi, child that was found in the remote depths of the Rising Star cave in Johannesburg, South Africa. LSU Department of Geography & Anthropology Associate Professor Juliet Brophy is the lead author on the first paper published today in the open access journal, PaleoAnthropology.

The team of 21 researchers from the University of Witwatersrand, or Wits University, including Brophy, who is also an honorary research affiliate there, announced the discovery of parts of the skull and teeth of the child who died nearly 250,000 years ago at about four to six years of age.

“This is the first partial skull of a child of Homo naledi yet recovered and this begins to give us insight into all stages of life of this remarkable species,” said Brophy, who led the study on the skull and dentition.

The child was found in an extremely remote passage of the Rising Star Cave System, some 39 feet beyond the Dinaledi Chamber, the original site of discovery of the first Homo naledi remains that were revealed to the world in 2015.

“Homo naledi remains one of the most enigmatic ancient human relatives ever discovered,” said Professor Lee Berger, project leader and director of the Centre for Exploration of the Deep Human Journey at Wits University and an Explorer at Large for the National Geographic Society. “It is clearly a primitive species, existing at a time when previously we thought only modern humans were in Africa. Its very presence at that time and in this place complexifies our understanding of who did what first concerning the invention of complex stone tool cultures and even ritual practices.”

“These finds are particularly important because the number of hominin deciduous, or baby, teeth in the fossil record is quite low; however, we have a good sample of deciduous teeth from the Rising Star system to which we can learn a lot about growth and development. In addition, deciduous teeth, in particular, can inform us about evolutionary relatedness, a question that we are still investigating for this species.”

Nearly 2,000 individual fragments of more than two dozen individuals at all life stages of Homo naledi have been recovered since the Rising Star cave system was discovered in 2013.

“This makes this the richest site for fossil hominins on the continent of Africa and makes naledi one of the best-known ancient hominin species ever discovered,” said John Hawks, a biological anthropologist and lead author of a previous study on the fossil skeleton of a male naledi nicknamed “Neo” that was also found at the Rising Star cave. 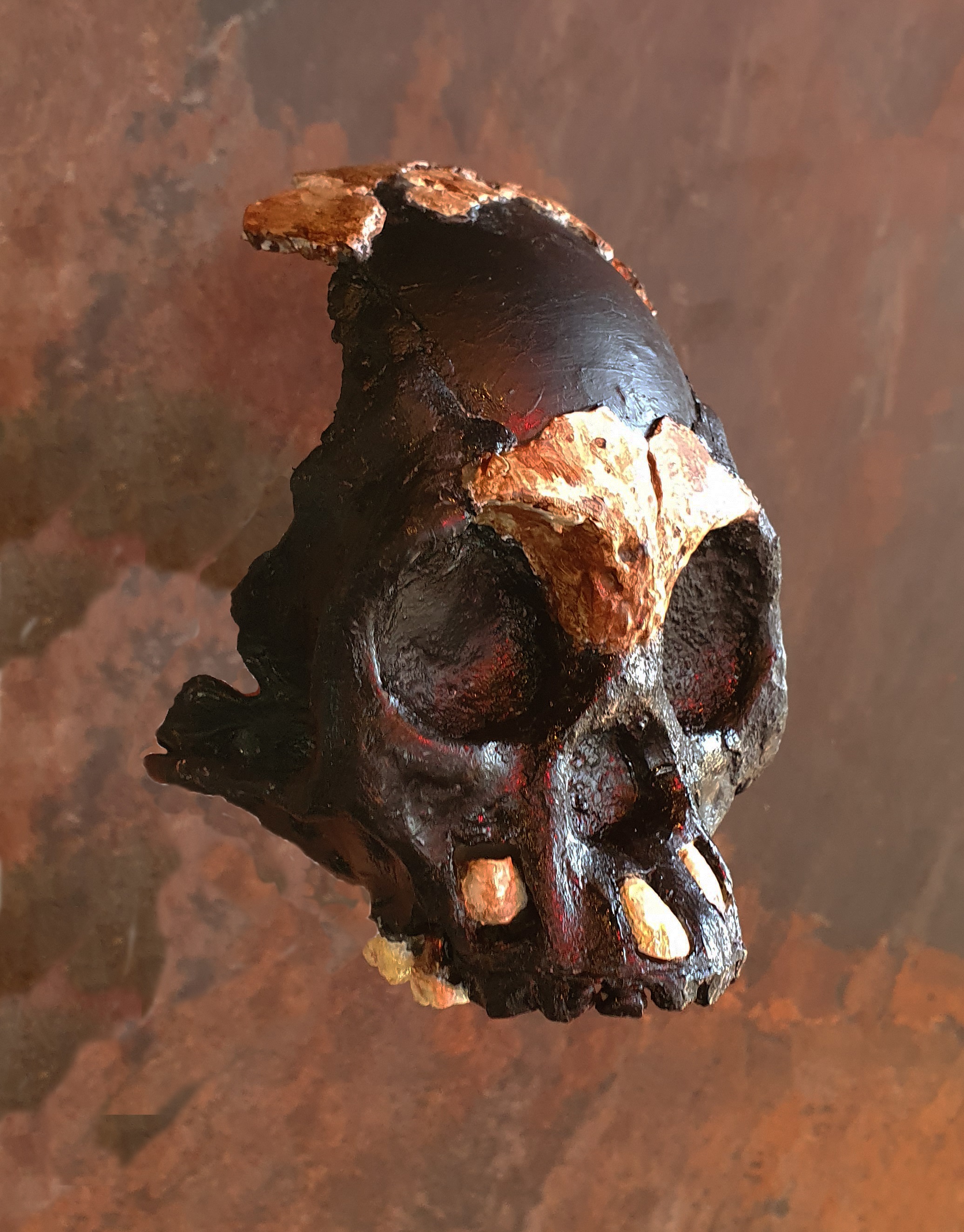 A reconstruction of the skull of Leti, the first Homo naledi child whose remains were found in the Rising Star cave in Johannesburg

The skull of the child presented in the current study was recovered during further work in the cramped spaces of the cave in 2017. The child’s skull was found alone, and no remains of its body have been recovered. The team have named the child “Leti” (pronounced Let-e) after the Setswana word “letimela” meaning “the lost one.” Leti’s skull consists of 28 skull fragments and six teeth and when reconstructed shows the frontal orbits, and top of the skull with some dentition.

“All of the teeth we recovered are from the same individual. We can tell this individual is a child because we recovered both deciduous, or baby, teeth as well as some permanent teeth. In addition, the cranial fragments are similar to a child’s in that they have not fused together yet like an adult. We now have a total number of five young juveniles in the Rising Star cave system which is a lot to have of one species in the hominin record,” Brophy said.

The discovery of a hominin child skull is an extremely rare find in the fossil record as juvenile remains tend to be thin and extremely fragile.

It has yet to be established how old Leti’s remains are. However, other fossils of Homo naledi were found in the nearby Dinaledi Chamber and dated between 335,000 to 241,000 years ago.

Paleoanthropologist Trenton Holliday (LSU ’88), who is a professor at Tulane, was also involved in the study of fossils from the Rising Star Cave system.

Leti’s remains were discovered in a tight passage that measures only 5 inches wide and 31 inches long located just beyond an area named the “Chaos Chamber.”

Marina Elliott, one of the original “Underground Astronauts” in the first Rising Star expedition that first uncovered Homo naledi and the leader of the excavation team that recovered Leti described the challenge of excavating Leti as “very difficult.”

“This was one of the more challenging sites with hominin fossils we have had to get to in the Rising Star system,” Elliott said.

Since its discovery, the Rising Star cave system has become one of the most prolific sites of discovery for hominin fossils in the world. Berger says that work is continuing throughout the cave system and that soon new discoveries are likely to shed further light on whether these chambers and passages are in fact a burial ground of Homo naledi, as the team originally hypothesized.

With no signs of carnivore damage or damage made by scavenging, and no evidence of the skull having been washed into the narrow passage, the team does not know how Leti’s skull came to rest, alone, in such a remote and inaccessible part of the system. The authors hypothesize that it is likely other members of its species were involved in the skull reaching such a difficult place.

“The discovery of a single skull of a child, in such a remote location within the cave system adds mystery as to how these many remains came to be in these remote, dark spaces of the Rising Star Cave system,” Berger said. “It is just another riddle among many that surround this fascinating extinct human relative.”