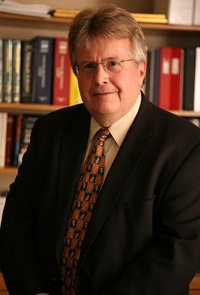 “I am honored to have this opportunity and look forward to working with my colleagues here at the Health Sciences Center, the City of New Orleans, the State of Louisiana and the entire LSU family of campuses to make sure our institution performs at its very best,” said Nelson. “When we are at our best, we are best positioned to help the people of Louisiana and beyond.”

He will hold the role for a minimum of 12-18 months to stabilize the institution while focusing on modernizing the university’s financials, reinvigorating its clinical partnerships and refocusing its research portfolio. At that point, a national search for a permanent candidate will take place.

“We look forward to Dr. Nelson’s leadership and know that great strides will be made under his direction,” said President William F. Tate IV.  “His experience, expertise and dedication will help LSU Health New Orleans leverage its exceptional strengths.”

After graduating from the State University of New York at Stony Brook with honors, Dr. Steve Nelson earned his medical degree at McGill University where he was a University Scholar.  He completed his residency in Internal Medicine at the Johns Hopkins Hospital as well as a Clinical and Research Fellowship in Pulmonary Medicine.  He also completed a Fellowship in Environmental Health Sciences at the School of Hygiene and Public Health at the Johns Hopkins University.

In 1984, Dr. Nelson joined the faculty of the LSU Health Sciences Center in New Orleans where he rapidly rose through the ranks being named Professor of Medicine in 1994, John H. Seabury Professor of Medicine in 1995, and Director of a NIH awarded Comprehensive Alcohol Research Center in 2000.  His research has been continuously funded since 1981 and he has been awarded more than $40 million in research grants during his career. He served as Vice Chair of Research in the department of Medicine and was named Chief of the Section of Pulmonary Medicine in 2005. He was appointed Dean of the Medical School in 2007, and in 2009 he became the President of the LSU Healthcare Network. In 2019, he was awarded the Spirit of Charity Award. He currently serves as the Chairman of the Board at the Louisiana Cancer Research Center.