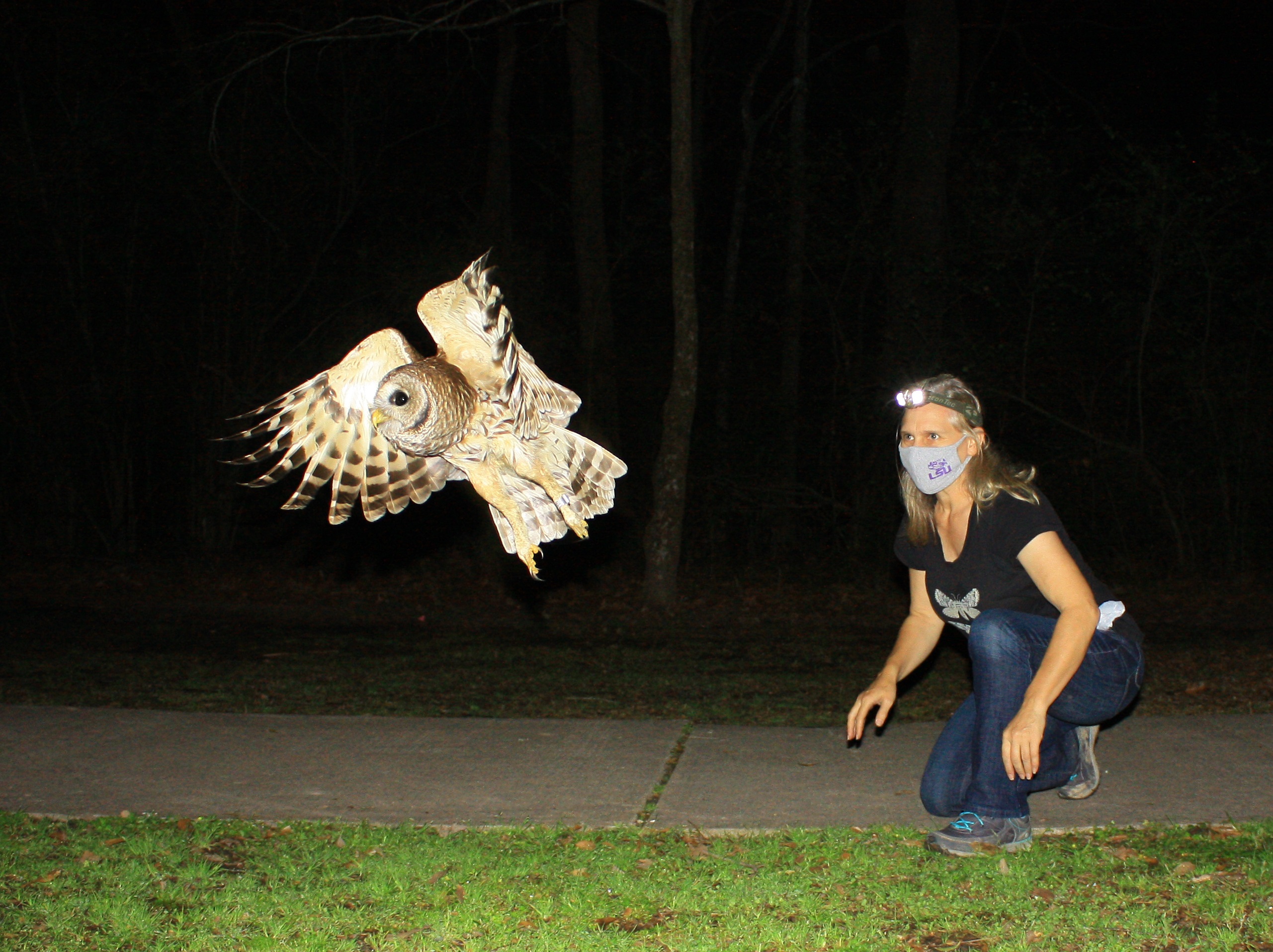 BATON ROUGE – Barred Owls are the most abundant owls in Baton Rouge and among the most common raptors in Louisiana. They eat rats, snakes and even crawfish. They inhabit large, mature trees, sometimes within Baton Rouge neighborhoods and BREC parks. But little is known about them.

“Barred owls are an urban wildlife species that are pretty special. There aren’t very many other owl species here other than the Great Horned Owl, the Eastern Screech and the occasional Barn Owl,” said LSU School of Renewable & Natural Resources’ Weaver Brothers Distinguished Associate Professor Sabrina Taylor, who is conducting research to gather more information about Barred Owls in the Baton Rouge area. “There are all of these little habitat fragments around the city and we want to know how Barred Owls are using them. For example, if they have a large patch of forest, do they stay in that large patch? If they inhabit a smaller patch of woods or a few trees, does the size of their home range change?”

She and colleagues at LSU are conducting a study on these large, charismatic nocturnal native birds to learn more about where they live and roam and what they do. So far, the researchers have caught and released about 50 Barred Owls in the Baton Rouge area.

“It’s really surprising to see the range in how far Barred Owls fly. There’s a lot of variation. Some of the Barred Owls that live in BREC’s Bluebonnet Swamp, for example, do not fly very far while other owls foray from one end of the city limits to the other,” said LSU PhD candidate Vitek Jirinec, who has been working on this research as a side project since 2018. 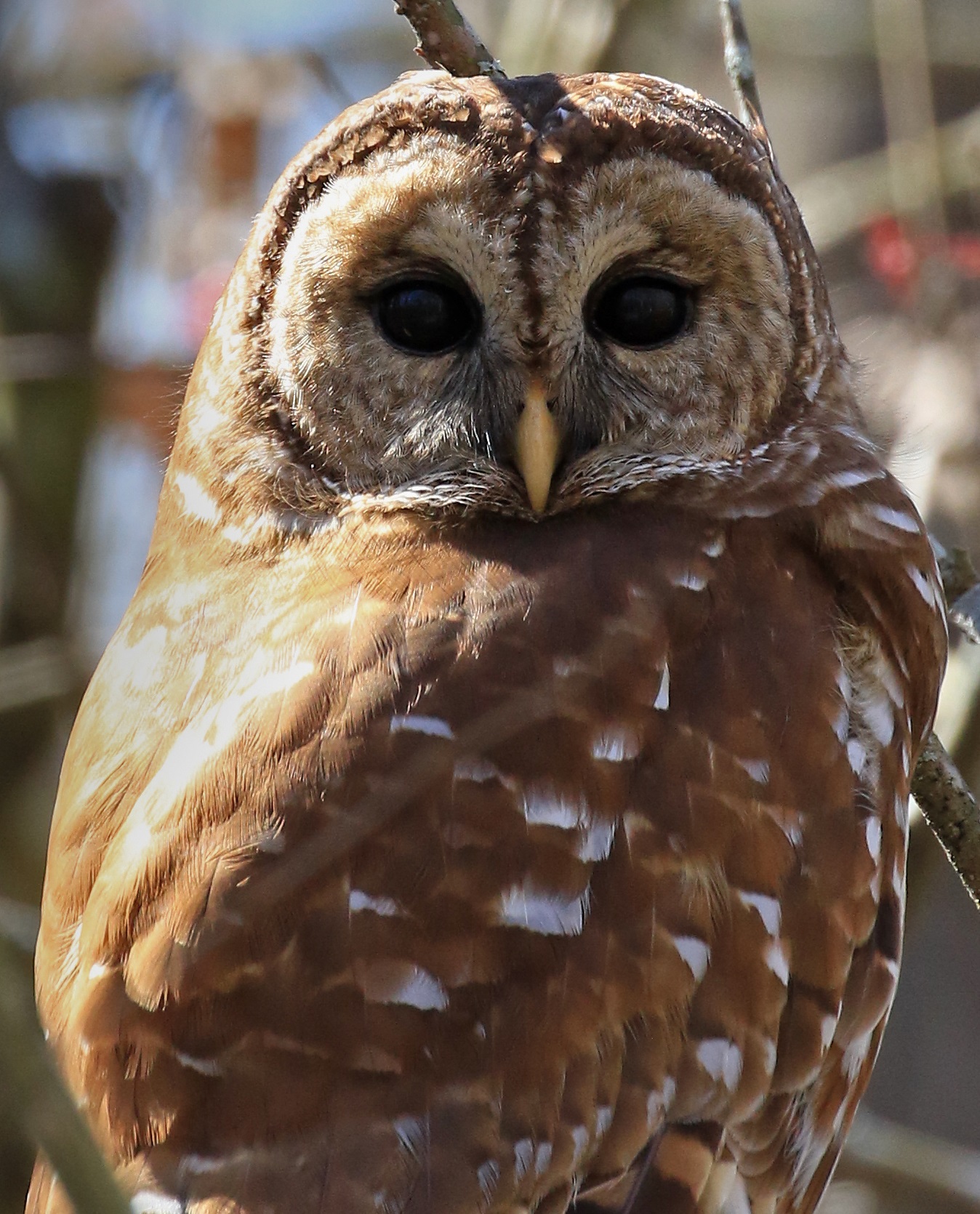 One of the many Barred Owls that lives in the BREC Bluebonnet Swamp Nature Center in Baton Rouge.

Jirinec and Taylor attach a tag that acts like a Fit Bit on an owl that tracks where it goes and when it is most active. So far, they have found that the owls tend to be the most active in the evening and the early morning just before dawn. The state-of-the-art GPS and very high frequency, or VHF, tags cost about $1,400, but the battery life is relatively short. To conserve the battery, the researchers have programmed the tags to record a GPS location only twice a day and twice a night. After a few months, the researchers recapture the owl to recover the tag, which offers a wealth of high-resolution data on the bird’s whereabouts and activity.

So far, one Barred Owl the researchers named Ragnar made a few forays all the way from his forest home in St. Gabriel to the LSU campus, where he stayed a few days during the winter. The researchers think that when food availability in the forest is low in the winter, the owls will fly into urban areas to prey on rats and other rodents.

For this fieldwork, the researchers catch owls at night using a net and 24-foot poles usually used to catch bats. Because Barred Owls are territorial, the scientists play owl calls on speakers which will lure the Barred Owl out and into the net. Once captured, the scientists weigh, measure, collect a small blood sample, attach the tag and release it. So far, they have collected movement data on about 30 Barred Owls.

They hope to analyze the data from the tags and conduct DNA analyses from the blood samples that will help identify male and female owls.

Now and throughout the summer, Barred owlets are out of their parents’ nests and hanging out in nearby trees or even the ground because they cannot fly. However, they are still dependent on their parents to come feed them.

“People find what they think is a sick owl or chick on the ground, but it’s perfectly fine. It's just a fledged owlet hanging out until its parents’ come to feed it,” Jirinec said.