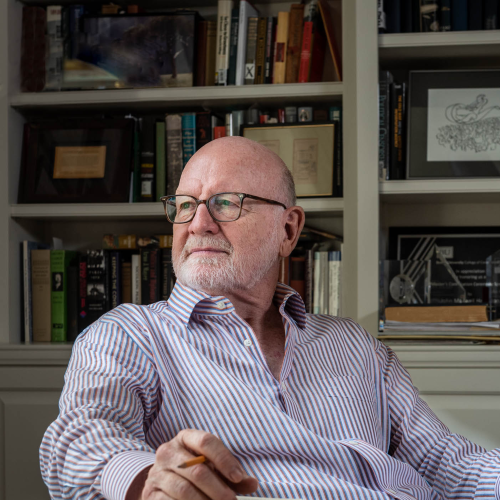 John Maxwell Hamilton, a longtime journalist, author and public servant, is the Hopkins P. Breazeale Professor of Journalism at the LSU Manship School of Mass Communication and a global scholar at the Woodrow Wilson International Center for Scholars, Washington, D.C.

In his 20 years as an LSU administrator, Hamilton was founding dean of the Manship School and executive vice-chancellor and provost. Throughout that time, he enthusiastically taught students and guided graduate students’ research, a pursuit to which he remains dedicated as a journalism professor.

As a journalist, Hamilton reported for the Milwaukee Journal, The Christian Science Monitor and ABC radio. He was a longtime commentator for MarketPlace, broadcast nationally by Public Radio International. His work has appeared in the New York Times, Foreign Affairs and The Nation, among other publications.

In government, Hamilton oversaw nuclear non-proliferation issues for the House Foreign Affairs Committee, served in the State Department during the Carter administration as an advisor to the head of the U.S. foreign aid program in Asia and managed a World Bank program to educate Americans about economic development. He served in Vietnam as a Marine Corps platoon commander and in Okinawa as a reconnaissance company commander.

Hamilton was the founding dean of the Manship School. During his 18 years in that position, the school added a one-of-a-kind doctoral degree devoted to media and public affairs, launched the Reilly Center for Media & Public Affairs and a related public opinion research facility, and assumed oversight of Student Media, which consisted of a daily newspaper, a magazine, a yearbook, and television and radio stations. The number of majors more than doubled, as did the size of the faculty and staff. The school’s endowment more than sextupled. The school, which had the highest admission standards on campus, was named a priority program at LSU—the only college-level unit so designated.

Asked to serve as executive vice-chancellor during a period of economic turmoil, Hamilton led a reorganization that merged colleges, schools and departments to save money and stabilize vulnerable academic programs. He set in motion a distance-learning initiative and created external support groups to fight for state funding and administrative autonomies.

After retiring from administration in 2012, Hamilton was a public policy scholar-in-residence at the Wilson Center and has continued his affiliation as a global scholar. He serves on the board of the International Center for Journalists, where he is treasurer, and was on the board of directors of the Lamar Corporation, listed on Nasdaq as the largest outdoor advertising company in the U.S. as measured by number of displays. He is a member of the Council on Foreign Relations.

In the course of his career, Hamilton has had assignments in more than 50 countries. In addition to covering foreign news, Hamilton has written extensively on foreign correspondence and sought to improve it. In the mid-1980s, he created and directed a Society of Professional Journalists project to develop techniques for local reporting of foreign news, especially on relations with developing countries. He later contributed to a similar project for the American Society of Newspaper Editors. In the 1980s, National Journal said Hamilton has shaped public opinion about the complexity of U. S.-Third World relations “more than any other single journalist.”

Hamilton is author or co-author of seven books and editor of many more. His two recent books are “Manipulating the Masses: Woodrow Wilson and the Birth of American Propaganda” and “Journalism’s Roving Eye: A History of American Foreign Reporting.” Each of them won the Goldsmith Prize from the Shorenstein Center on Press, Politics and Public Policy and the Book of the Year Award from the American Journalism Historians Association, as well as other awards. He is editor of the LSU Press book series, “From Our Own Correspondent.”

Hamilton received the Freedom Forum’s Administrator of the Year Award in 2003. Other honors include two Green Eyeshade Excellence in Journalism Awards, the Byline Award from Marquette University and an MLK Day diversity award from LSU. He has received funding from the Carnegie and Ford foundations, among others. In 2002, he was a Shorenstein Fellow at Harvard University’s Kennedy School of Government. He has served twice as a Pulitzer Prize jurist. He is a member of the Metropolitan Club of Washington.

Hamilton earned bachelor’s and master’s degrees in journalism from Marquette and Boston universities, respectively, and a doctorate in American Civilization from George Washington University.

McCune, M. M., & Hamilton, J. M. (2017). 'My object is to be of service to you’: Carl Ackerman and the Wilson administration during World War I, Intelligence and National Security.

Hamilton, J., Lawrence, R., & Cozma, R. (2010). The Paradox of Respectability: The Limits of Indexing and Harrison Salisbury’s Coverage of the Vietnam War, The International Journal of Press/Politics, January.

Hamilton, J., Coleman, R., Grable, B. & Cole, J. (2006). An Enabling Environment: A Reconsideration of the Press and the Spanish-American War, Journalism Studies, February.

Fleming, A. M., & Hamilton, J. M. (2009). Introduction, The Crimean War: As Seen by Those Who Reported It. Louisiana State University Press.*

Hamilton, J. M. (2000). Casanova Was a Book Lover:  And Other Naked Truths and Provocative Curiosities about the Writing, the Selling, and the Reading of Books. Louisiana State University Press; (2001) Penguin.

*Published in series, "From Our Own Correspondent."