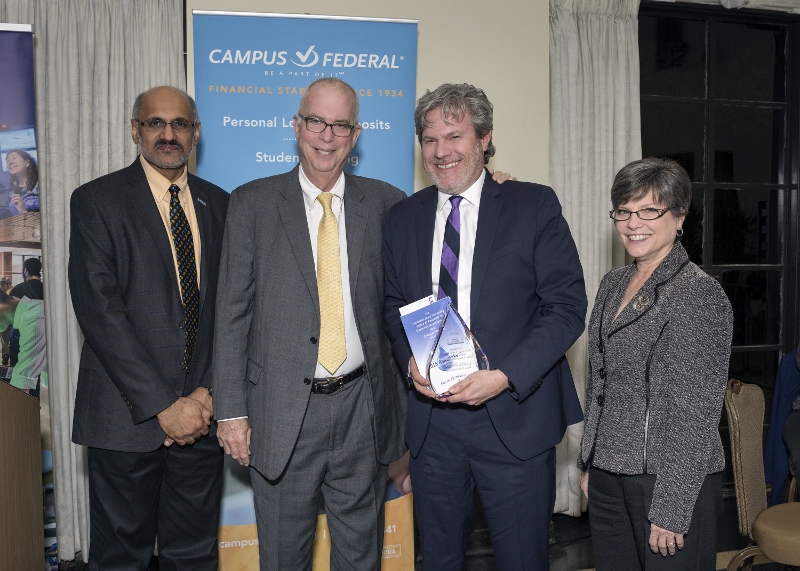 Dr. Lance Porter was one of six LSU faculty members across campus – all leaders in their fields – who were recently honored with Rainmakers Awards for Research and Creative Activity from the LSU Office of Research & Economic Development. Rainmakers are faculty members who balance their teaching and research responsibilities while extending the impact of their work to the world beyond academia.

Porter has been called “one of the leading scholars in the area of new and emerging media.” In his 12 years at the Manship School, he has transformed the school into one of the most technologically advanced mass-communication schools in the nation. Porter directs our Social Media Analysis & Creation (SMAC) Lab, which was his idea and is the first in the nation at a mass-communication school. The Lab is a magnet for research in this nascent field.

”Lance led a faculty technological revolution through collaboration and quiet leadership informed by his own scholarship,” Manship Dean Jerry Ceppos said. ”It is no surprise that the accreditation site team that visited us a year ago cited ‘an ambitious, thoughtful plan to enhance the digital and social-media literacy of (the School’s) students well as members of the Baton Rouge community.’ Lance’s leadership in digital media actually spans the country.”

Porter holds the Mary P. Poindexter Professorship. His current research focuses on the cultural effects of social media. Some of his students work with the nonprofit organization Dialogue on Race in Louisiana to encourage productive conversations about race on social media. His work has appeared in numerous journals and books devoted to advertising, journalism, public relations, health communications and sport.

Before coming to LSU in 2004, Porter spent four years as executive director of digital marketing for Disney, where he oversaw the creative and digital media strategies for more than 80 films. Porter won a Clio Award for excellence in advertising.

After earning his Ph.D. from the University of Georgia, Porter continued his interdisciplinary work at LSU through a joint appointment with the Center for Computation & Technology, where he helped develop an undergraduate minor and master’s degree in digital media.