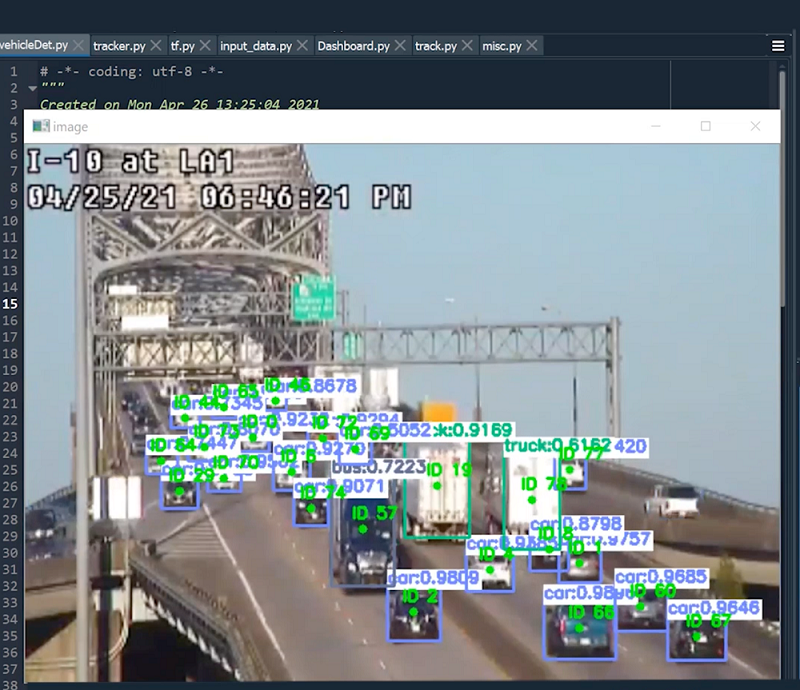 Based on an AI engine trained by LSU computer scientist Supratik Mukhopadhyay, the researchers will analyze videos obtained from video cameras to identify high-risk traffic situations around commercial vehicles.

BATON ROUGE – The number of fatal car crashes involving large trucks continues to rise, according to the Federal Motor Carrier Safety Administration whose mission is to reduce crashes, injuries and fatalities involving large trucks and buses. That is why the FMCSA provides competitive grants on research in how to reduce crashes involving commercial vehicles.  LSU Center for Analytics and Research in Transportation Safety, or CARTS, was awarded one of these competitive grants to build an artificial intelligence, or AI, engine to better understand driver behavior that leads to crashes in order to help prevent them.

“We have very good information on crashes on roads. But we don’t have information regarding driving behavior on roads that may lead to crashes. This grant will help to provide information about driver behavior on roads, especially around commercial vehicles,” said Helmut Schneider, CARTS executive director and the Ourso Family Distinguished Professor of Information Systems in the E. J. Ourso College of Business, who is the lead principal investigator on this project.

Fatal car crashes on the rise

In Louisiana, the number of fatal commercial vehicle crashes jumped by more than 28 percent from 89 fatalities in 2020 to 114 fatalities on 2021, according to Cory Hutchinson, the director of CARTS, who is a co-principal investigator on this project. More detailed information about crash data are published at carts.lsu.edu.

“I’ve known people who have survived car crashes, especially those involving large, commercial trucks, and I know they can be devastating,” said computer scientist Supratik Mukhopadhyay, who is an LSU Department of Environmental Science professor and co-principal investigator on this grant.

Based on an AI engine trained by Mukhopadhyay, the researchers will analyze videos obtained from video cameras to identify high-risk traffic situations around commercial vehicles.

With more than $950,000 in support from the U.S. Department of Transportation, the researchers will be able to build dashboards which provide insights into what factors contribute to crashes with commercial motor vehicles and how distracted driving plays a role.

For instance, a couple of years ago there was an increase in sideswipe crashes with commercial trucks on Interstate-10 in New Orleans.

“It was suspected that some may have been staged by car drivers. These types of crashes could be identified by cameras,” Schneider said. “Analyzing videos using AI will further help us as researchers to better understand what leads to a crash.”

This is the third competitive grant from the Federal Motor Carrier Safety Administration that CARTS researchers at LSU have been able to attract, which will help Louisiana to improve road safety. The two-year project will culminate in data dashboards that identify major risk factors that cause crashes to help inform where and when resources can best be deployed to reduce vehicle crashes.