The Age and Construction of the LSU Campus Mounds: Consideration of Ellwood and Colleagues, SAA 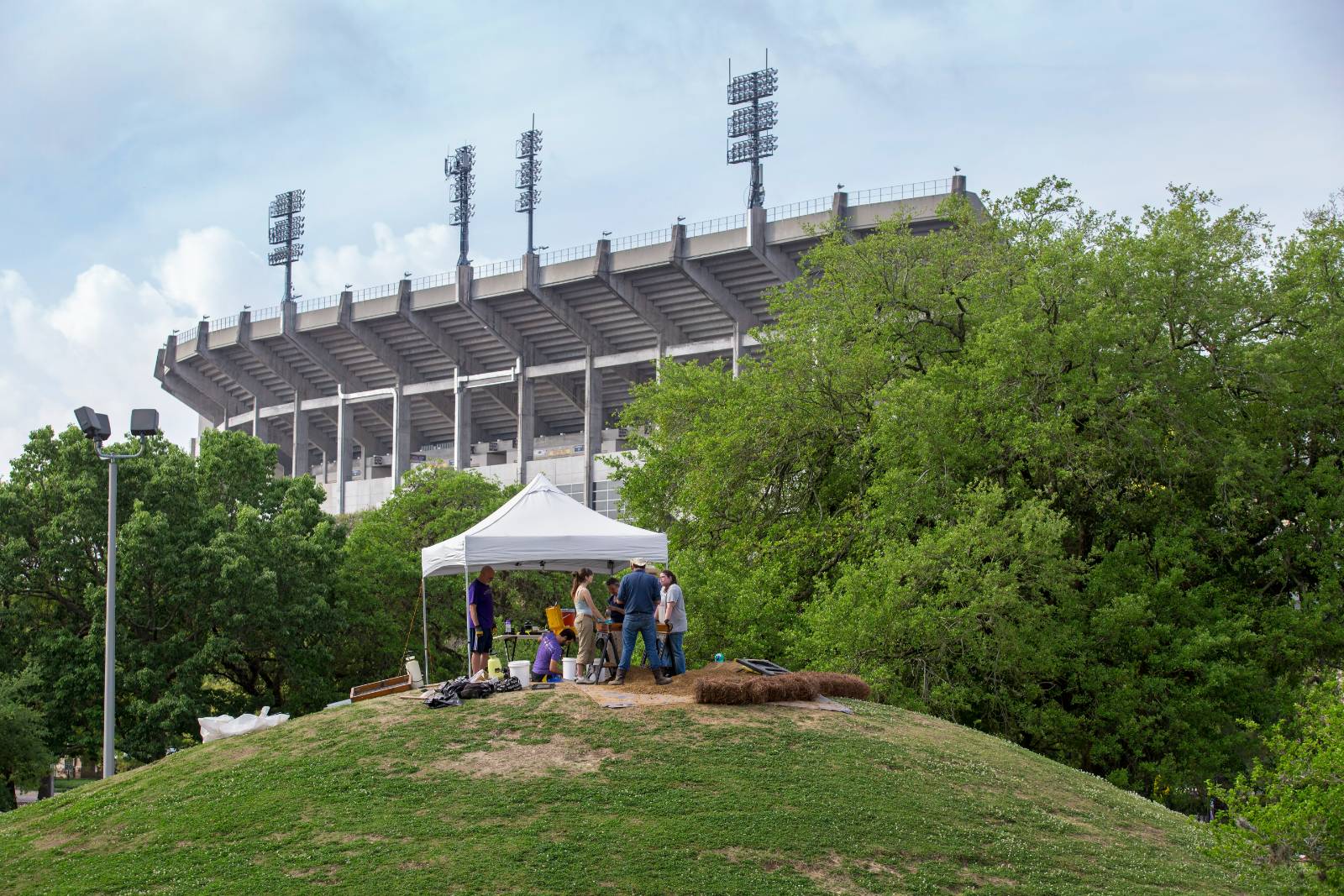 Researchers excavated LSU Campus Mound B in 2018 by Tiger Stadium. The ancient mounds located at the center of LSU's campus have been a gathering place and destination for people for thousands of years.

BATON ROUGE — The LSU Campus Mounds sit on high ground overlooking the Mississippi River floodplain and have been a gathering place and destination for people for thousands of years. They are some of the oldest mounds in Louisiana and North America.  Recent papers have offered alternate interpretations of their age. Knowing the approximate age of the mounds provides significant insight into the people who built the mounds. Archaeologists have built “culture histories” describing prehistoric ways of life and the way lifestyles have changed through time. In other words, knowing the age of the mounds provides context into the way of life of the people who built and used the LSU Campus Mounds.

Archaeological data from Louisiana and the southeastern U.S. indicate that between 5,000 and 7,000 years ago—a time archaeologists call the Middle Archaic—bands of about 20-50 people lived off the land and moved seasonally to take advantage of the availability of different food resources. This lifestyle greatly differed from those who were here 11,000 years ago.

“We know a lot about what people were doing in the North American Middle Archaic period and their lifestyle,” said Heather McKillop, the Thomas & Lillian Landrum Alumni Professor in the LSU Department of Geography & Anthropology and co-author on the paper published in SAA, the Magazine of the Society for American Archeology. “It’s very exciting that we have these earthen mounds preserved here at LSU. As we study them, we need to tie the mounds to the people who built them.” 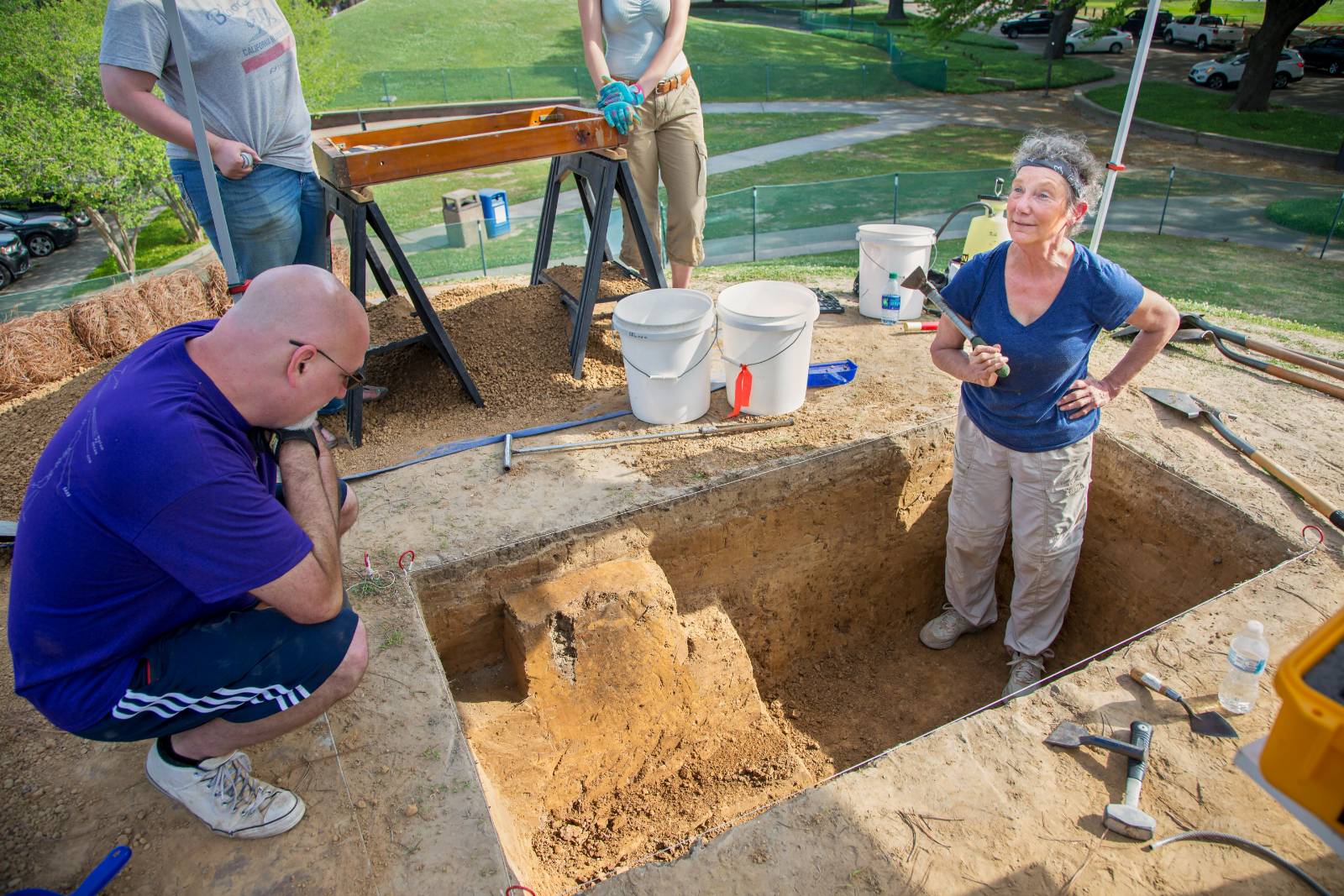 William G. Haag Professor of Archaeology Rebecca Saunders and colleagues conducted an excavation of LSU Campus Mound B in 2018.

As populations grew within the large bands of families, central meeting spots were built where multiple bands congregated to exchange information, trade and potentially find mates. And when people get together, what do they tend to do?

“They eat, they dance, they perform rituals that tie them to the past and help them see their way into the future. Building something on the landscape that symbolizes this seems to be an essentially human thing. Human beings do this all over the place, and in the southeastern United States, the landmark tends to be earthen or shell mounds,” said Rebecca Saunders, the William G. Haag Professor of Archaeology at LSU and co-author.

So, the LSU Campus Mounds fit within a way of life where many bands of people built earthen mounds as they were hunting, gathering and moving around the landscape in Louisiana and in the region visiting their mound sites as well as the mound sites of other bands of people.

“We know of at least 13 other sites in Louisiana with earthen mounds built between 5,000 to 7,000 years ago, which indicates that different communities were exploring this idea of building mounds during this period of time,” said Louisiana State Archaeologist Chip McGimsey, who is the lead author of the paper and director of the Louisiana Division of Archaeology.

Hundreds of mounds have been destroyed by landowners, farmers and corporations. These include sites, such as the Monte Sano mounds just upriver from the LSU Campus Mounds, which were built about 7,500 years ago but were destroyed in the 1960s.

“The LSU Campus Mounds are probably the best protected mounds because they are on the campus of LSU and LSU has made a very strong commitment to preserving them. Most of the other mounds are on private land and landowners can do what they’d like with them.”

Earlier this year, LSU geologists published a paper, “The LSU campus mounds, with construction beginning at ∼11,000 BP, are the oldest known extant man-made structures in the Americas.” The LSU archaeologists’ new paper published this month is a response to it.

In this new paper, the archaeologists write: “[The geologists’] interpretation of the age and construction sequence for both mounds represents a significant departure from current archaeological understandings of the origins of mound building in North America. If confirmed, this site would change how archaeologists think about the early history of North America.”

“We’re not questioning the dates but we’re questioning the interpretation and the lack of inclusion of other datasets. This disagreement in no way detracts from the significance and importance of the LSU Campus Mounds. While we would argue they are not the oldest person-made earthworks in North America, they are still some of the very oldest and part of what is a remarkable history of mound-building in North America that has its origins here in Louisiana. The LSU Campus Mounds are part of that tradition,” McGimsey said.

The archaeologists raise the point that 11,000 years ago, people roamed in small groups over large expanses of land throughout North America hunting Ice Age animals such as mammoths, mastodons and ancient bison. There is no other evidence that people were building mounds at this time.

The archaeologists also question the interpretation that the first LSU Campus Mound was built to about half of its current height and then abandoned for about 1,000 years, before the final stage was added. Soil scientists and archaeologists have studied multiple sediment cores taken from the top to the bottom of both mounds. They conclude that if there had been a hiatus of about 1,000 years, there would be color, textural and chemical changes on the exposed surface. None of these changes were observed in the cores. Instead, it appears the mounds were built as a continuous process.

“This process has been shown to not necessarily take very long. If you have a group of people who were coming here seasonally and were building these mounds, it would not take thousands of years to build,” McKillop said.

While the geologists believe the microscopic fragments from burned cane and rush plants called phytoliths found in the mounds may have been remnants from intense, potentially ceremonial fires, the archaeologists point out that phytoliths are commonly found in soil in the area. High densities of phytoliths can occur naturally because wild cane must burn occasionally like forest undergrowth for the health of the ecosystem. Thus, the archaeologists argue the phytoliths could have already been in the soil that was used to build the mounds. The archaeologists also point out that if routine, intense ceremonial fires occurred at the LSU Campus Mounds, as the geologists suggest, there should be obvious changes in soil texture and color where the fires burned.

In addition to raising these points, the archaeologists encourage other researchers to pursue further study of the site and outline specific questions that can provide further clarity about the LSU Campus Mounds.