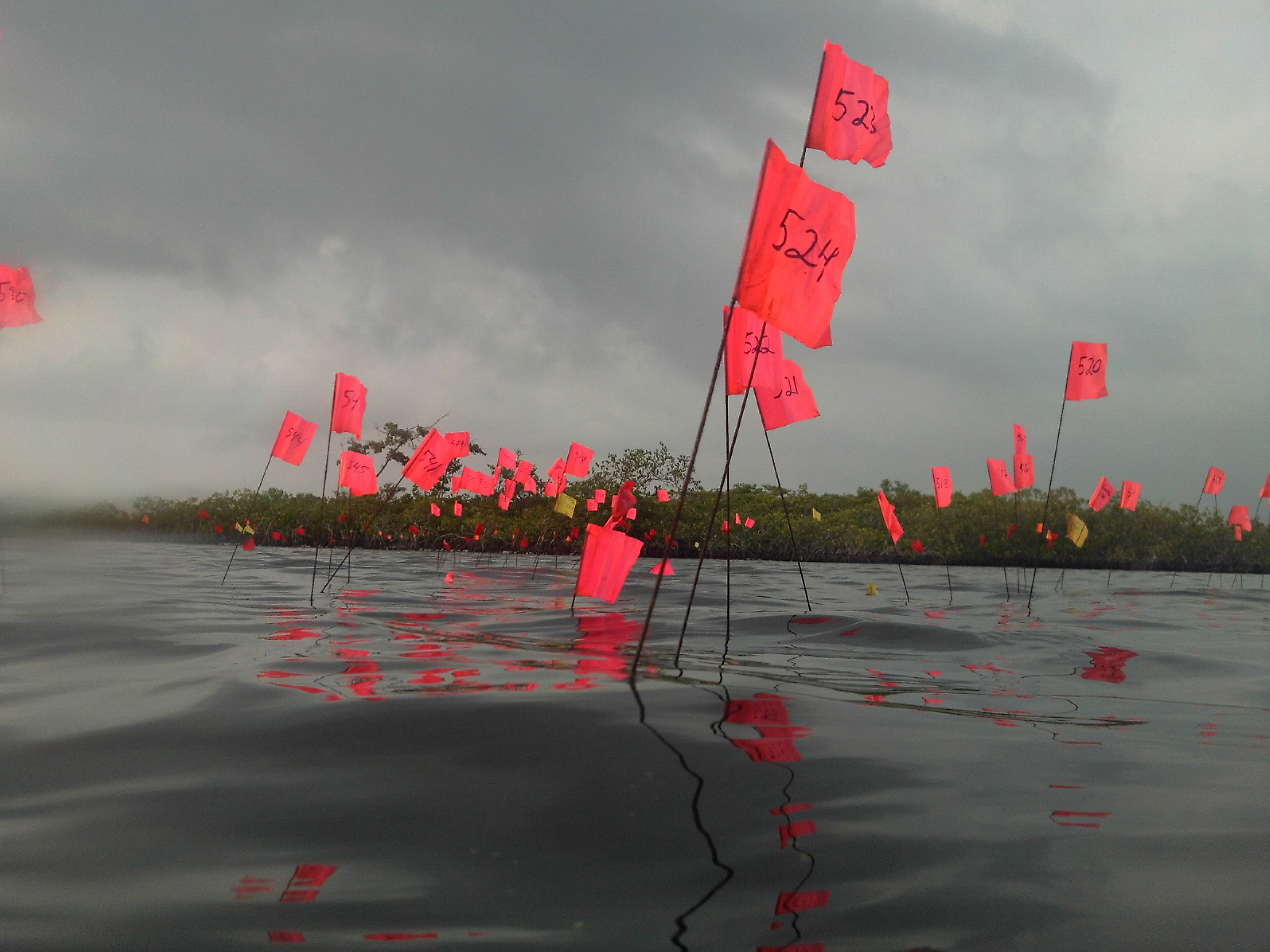 Flags marking the sites of posts and other artifacts from the 1,200-year-old salt kitchen submerged on the sea floor.

BATON ROUGE – Archaeologists working in Belize have found ancient Maya salt workers worked from home. The discovery was made during the excavation of Ta’ab Nuk Na, the largest known Maya salt works in the country, which is submerged in a coastal lagoon. There, the researchers uncovered a residential structure showing a household lived, as well as worked, at the site. The discovery was made at Paynes Creek National Park, in southern Belize, where over 100 other submerged Maya sites from between 600-1000 AD had been previously discovered. This includes several other salt works spread along the shore.

“The inland Maya needed salt­—a basic biological necessity—which was scarce inland and most was supplied from salt works along the coasts,” said Heather McKillop, the Thomas & Lillian Landrum Alumni Professor in the LSU Department of Geography & Anthropology, an author of the study.

As such, McKillop and Associate Professor E. Cory Sills, from the University of Texas at Tyler, set out to study how this important industry was organized. Their results are published in the journal Antiquity.

“We had excavated salt kitchens at other Paynes Creek Salt Works sites, but we wondered if the workers lived on site, which has implications for understanding the organization of salt production at the height of Classic Maya civilization,” McKillop said.

However, most of the excavations at other sites at the Paynes Creek were focused on salt production. To explore this question the team carried out a systematic survey of Ta’ab Nuk Na, the largest salt works in Paynes Creek. Underwater archaeologists marked the location of key finds on the lagoon floor, leaving the water bristled with a forest of more than 600 flags marking their location. This included many features that rarely preserve outside of a submerged setting.

“We found hundreds of wooden posts that define the walls of Classic Maya ‘pole and thatch’ wooden buildings at Ta’ab Nuk Na,” Sills said. “Since wood normally decays in the tropical landscape of the Maya area, the wooden buildings provide a rare view of the architecture that once dominated most ancient Maya communities.”

The locations of these were digitally plotted, and key elements excavated. Together, the footprint of several buildings emerged from the data. Radiocarbon dating revealed they were the result of several phases of construction and initially consisted of just a handful of those residential buildings in the 6th century AD, with no signs of salt production. This changed around 650 AD when the three salt kitchens and a large residential structure were built at the site. 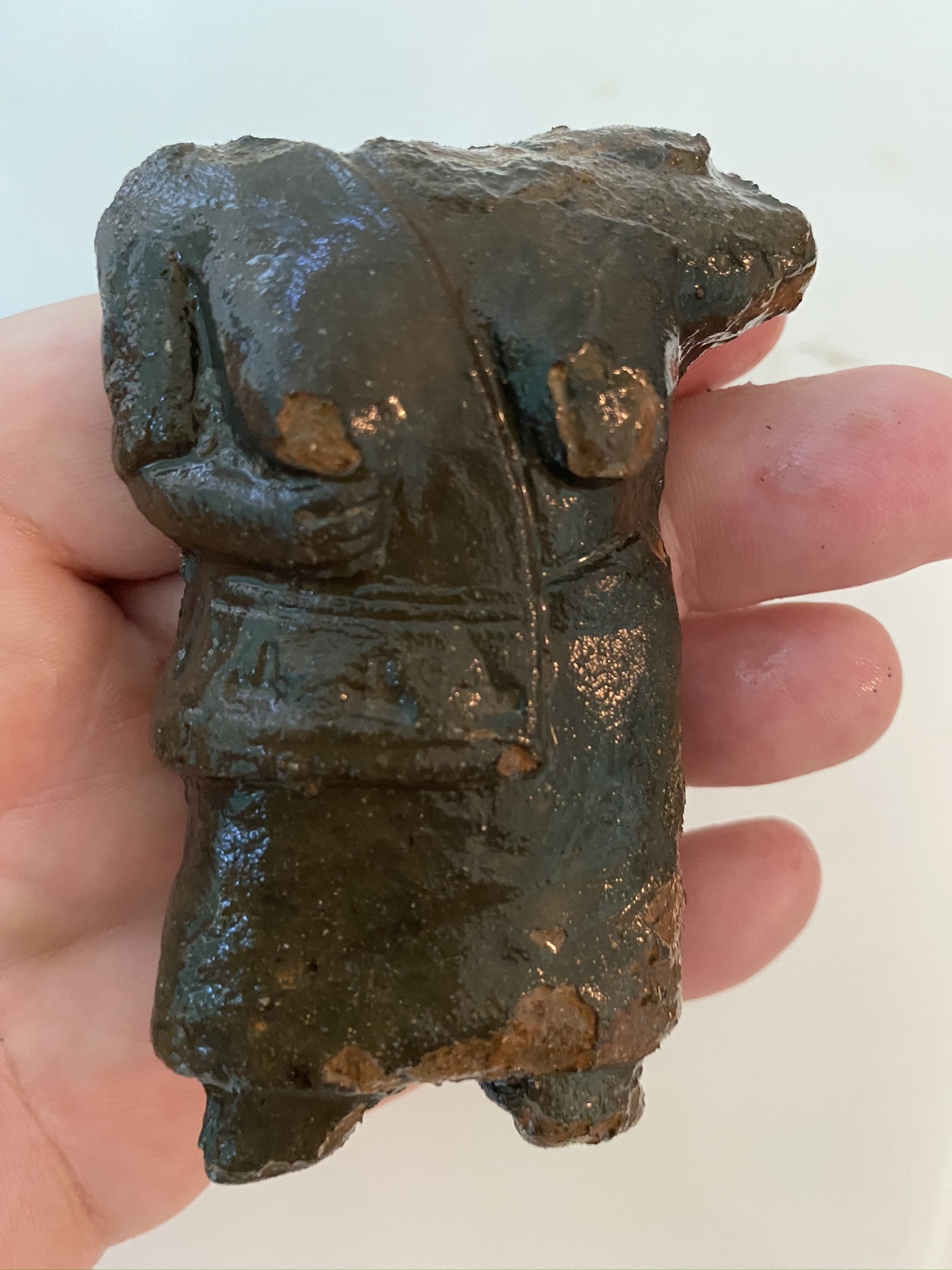 “Mapping individual artifacts on the sea floor allowed us to see their distribution in relation to the 10 pole and thatch wooden buildings and to reconstruct the activities in the different buildings,” McKillop said.

Household activities identified in the residential building include fishing, preparing food and cooking, woodworking and spinning cotton. Evidence of these activities shows the large structure was a residential building, confirming that salt production was done by people working from home. The household would have first produced salt for themselves before trading the surplus with other communities.

“The surplus was transported inland to marketplaces where it was exchanged for other commodities, including pottery and stone tools found at the salt worker’s residence,” Sills said.

This would have been a large surplus, with estimates indicating Ta’ab Nuk Na may have produced over a ton of salt a week. Together, Ta’ab Nuk Na and the other contemporary salt works at Paynes Creek could have provided enough for 24,000 people. Since the workers lived at the site and worked in indoor kitchens means salt could be produced year-round. This arrangement would have helped meet the demand of inland Maya cities, which were growing to their biggest extent during this period. Production at Ta’ab Nuk Na stopped after 800 AD and the large site of Ek Way Nal, in another part of the lagoon, became the biggest salt kitchen in Paynes Creek. Analysis of finds from Ek Way Nal, which the team had previously studied, shows there were also residential structures at the site. Together, this shows that ancient Maya salt workers were working from home for centuries, with the salt kitchens being attached to residential sites. This setup was able to supply the massive quantity of salt the growing Maya cities of this period needed.