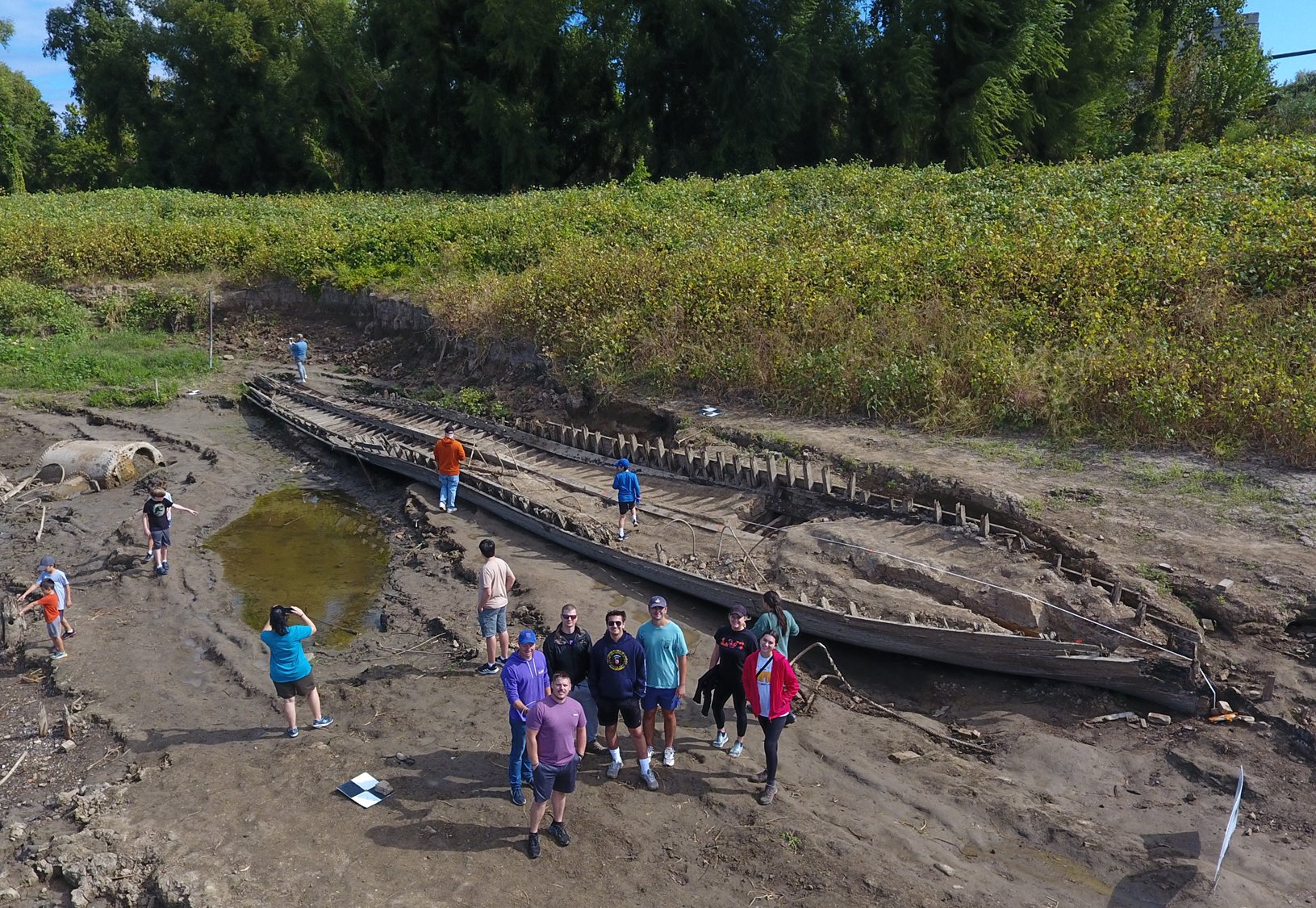 In the month of October, the Mississippi River has seen record low levels from Illinois to Louisiana. In Baton Rouge, the level is revealing a more than 100-year-old sunken ferry and the underbelly of the USS Kidd.

“While this is the time of the year when the river levels are usually low, we typically do not see anything this extreme. At least five or six locations along the river, including Mississippi, Arkansas and Missouri are seeing historically low-water levels,” said Clint Willson, the director of the LSU Center for River Studies and the Mike N. Dooley, PE Professor of Civil & Environmental Engineering. “The reason for this is that a large percentage of the Mississippi River watershed, which covers approximately 42 percent of the contiguous United States, is either in a drought or is experiencing extremely dry conditions. Typically, in the fall, at least one or two of the major Mississippi River tributaries would be in ‘normal’ flow conditions and the river would not be this low.”

Willson, and Kory Konsoer, LSU Department of Geography & Anthropology associate professor and Coastal Studies Institute Fellow, shares more insight on what the low-level means for the state and nation.

What does this mean for the economy of the country?
Konsoer: An environmental impact, that could have economic consequences, is that the extremely low water levels are also allowing for saltwater intrusion from the Gulf of Mexico up the Mississippi River. Plaquemines Parish and New Orleans do use water from the river for municipal drinking water, so this saltwater wedge that is extending upstream is a cause for concern. The U.S. Army Corps of Engineers, or USACE, is constructing a sill on the river bed near Myrtle Grove, La. to block the wedge from moving upstream.

How does it impact industry, including tourism?
Willson: While the low river levels have forced some river cruises to be cancelled, the major economic impact is due to the restrictions on the barge traffic – a critical part of keeping products and commerce moving throughout the Mississippi River and its tributaries. Below Baton Rouge, the USACE maintains the navigation channel depth at a minimum of 50 feet. However, the navigation channel, above Baton Rouge, is maintained to a depth of at least nine feet. The nine-foot depth allows fully loaded barges, often connected to another 10 or more barges, to move up and down the river reliably and safely. However, the historically low river levels are restricting how much can be put on the barges and/or how many can be towed at the same time. This is having a tremendous impact on the nation’s agricultural community since over 60 percent of our agricultural exports are transported down the river on barges. During normal conditions, these barges transport the exports to Louisiana-based ports, where they are loaded onto ocean-going vessels and then transported around the world. The inability to load barges and their reduced capacity is resulting in a backlog of grain and other products. While the major impact of this is on the agricultural community, the ripple effect will be felt by ports in the lowermost Mississippi that transfer the products to larger ships and countries around the world who rely on these exports.

Can you describe what we’re seeing now compared to the usually roaring river?
Willson: According to the United States Geological Survey data, since the beginning of October, the Mississippi River’s discharge at Baton Rouge has been below 200,000 cubic feet per second, or cfs, and now is around 150,000 cfs. During years when the USACE has to open the Bonnet Carré spillway, located just up the river from New Orleans, the Mississippi River discharge is about 10 times higher, i.e., 1,500,000 cfs.

In terms of river levels, during the month of October, the Mississippi River in Baton Rouge is between 4 and 5 feet high. For reference, the flood stage of the river is 35 feet and the record high level is 47.3 feet.

What do the short- and long-term weather forecasts mean in terms of getting the river back to ideal water level conditions?
Konsoer: Another cause for concern is that climatologists are predicting another La Niña year this winter from Dec. 2022 – Feb. 2023. This has the potential for drier than average winter months in many parts of the Mississippi watershed, setting up a situation where the water is not replenished for the high water season and water levels stay lower than average in the spring.

What can be done to fix this?
Willson: There isn’t a lot that can be done, other than expedited dredging to deepen the navigation channel for these abnormally low river levels. The USACE typically has to dredge the navigation channel to keep the authorized depths, but the severity of the current conditions means that they are having to dredge more locations and/or to larger depths. That said, there are some efforts to get more water into the main river, such as the Tennessee Valley Authority’s releasing more water from two of its dams to help supplement water levels on the Mississippi River. However, that is not a sustainable, long-term solution.

One thing to keep in mind is that little or none of the rain that falls in the greater Baton Rouge area goes to the Mississippi River. The stormwater runoff goes generally southeast towards the Amite River and then into Lake Maurepas and Lake Pontchartrain.

LSU’s Scholarship First agenda places coastal research as among the top five of the university’s strategic priorities. It also aligns science and engineering with arts and humanities toward better outcomes in each focus area, a key aspect of the evolving LSU 2030 Strategic Plan.