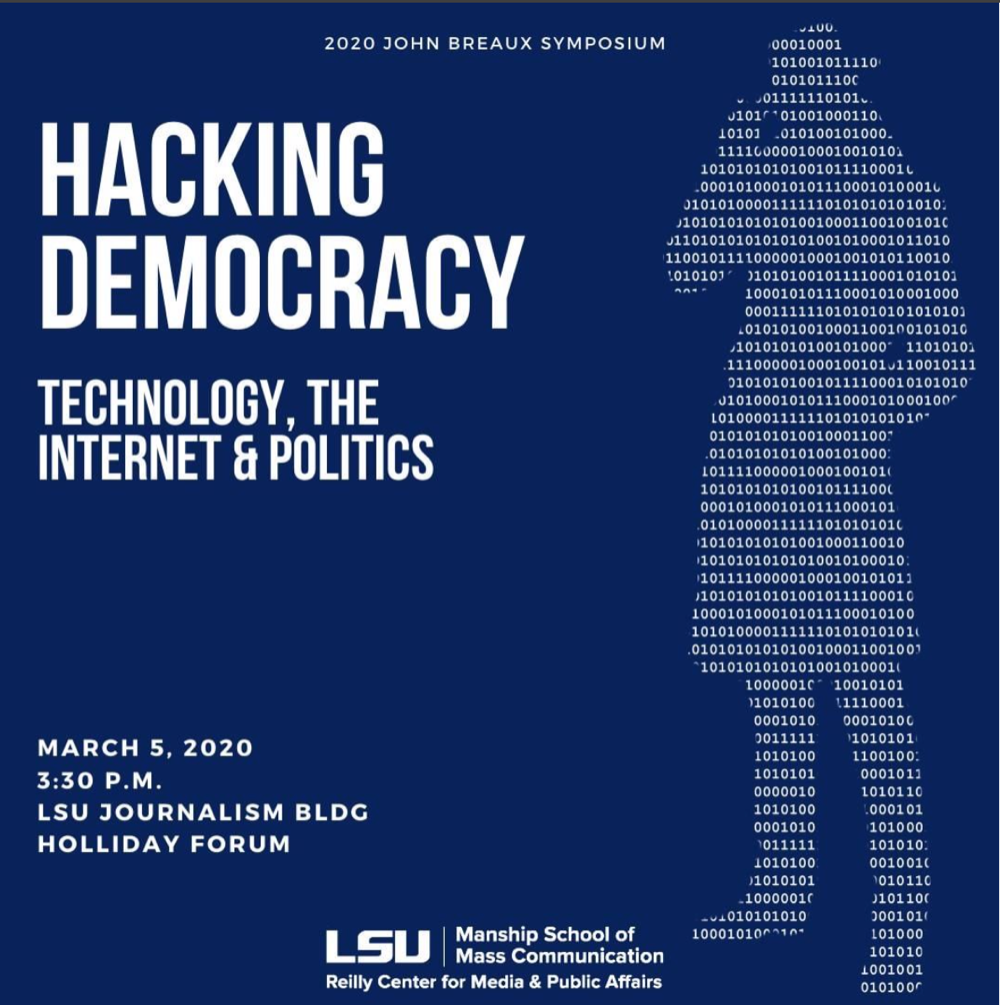 BATON ROUGE –The Reilly Center for Media & Public Affairs at the LSU Manship School of Mass Communication will host an in-depth look at how the spread of disinformation on social media and the susceptibility of electronic voting machines affect the integrity of U.S. elections.

With a new presidential election cycle dawning, the voting public is questioning the security of the nation’s election systems. After the 2016 Presidential Election thrust the vulnerability of our voting technology to the forefront of conversation in the United States, there has been much discussion surrounding the security of future elections, as well as the use of social media as a tool to distribute divisive and false information.

The annual John Breaux Symposium, “Hacking Democracy: Technology, the Internet & Politics,” will explore how foreign interference aimed at destabilizing political conversation, stoking racial tensions and spreading disinformation across social media platforms has led to ever-increasing friction among the voting population. The schedule for the day is as follows:

“The Breaux Symposium’s goal is to bring greater awareness and additional analysis to topics affecting our media and political landscape,” said LSU Reilly Center for Media & Public Affairs director Dr. Jenée Slocum. “This year’s symposium will investigate how the spread of disinformation and the vulnerability of our election technology combine to threaten the integrity of our democratic process.”

The event is scheduled for March 5, 2020, from 3:30 p.m. to 7:30 p.m. in the Holliday Forum of the Manship School’s Journalism Building at 144 Field House Drive on the campus of Louisiana State University. Admission is free and open to the public, but space is limited. Reserve your seat. The event can also be live streamed on the Manship School’s YouTube channel.

Parking is available in the Union Square Garage near the LSU Bookstore. For more information, contact ksibley1@lsu.edu.

The Reilly Center for Media & Public Affairs is partnership-driven, action-oriented and dedicated to exploring contemporary issues at the intersection of mass communication and public life. Its interdisciplinary approach draws together experts from diverse fields to advance research and dialogue. The intent is to inspire our communities to think deeply, take action, develop solutions and broaden knowledge. Underlying the Center’s endeavors is to strengthen and advance the Manship School of Mass Communication’s national and state leadership in media and politics.

LSU’s Manship School of Mass Communication ranks among the strongest collegiate communication programs in the country, with its robust emphasis on media and public affairs. It offers undergraduate degrees in public relations, journalism, political communication, digital advertising and pre-law, along with four graduate degree programs: master of mass communication, Ph.D. in media and public affairs, certificate of strategic communication and dual M.M.C./law degree. Its public relations students were recently ranked the #1 team in the nation, and its digital advertising and student media teams frequently earn national recognition.