Voyiadjis Has Pair of Books Published 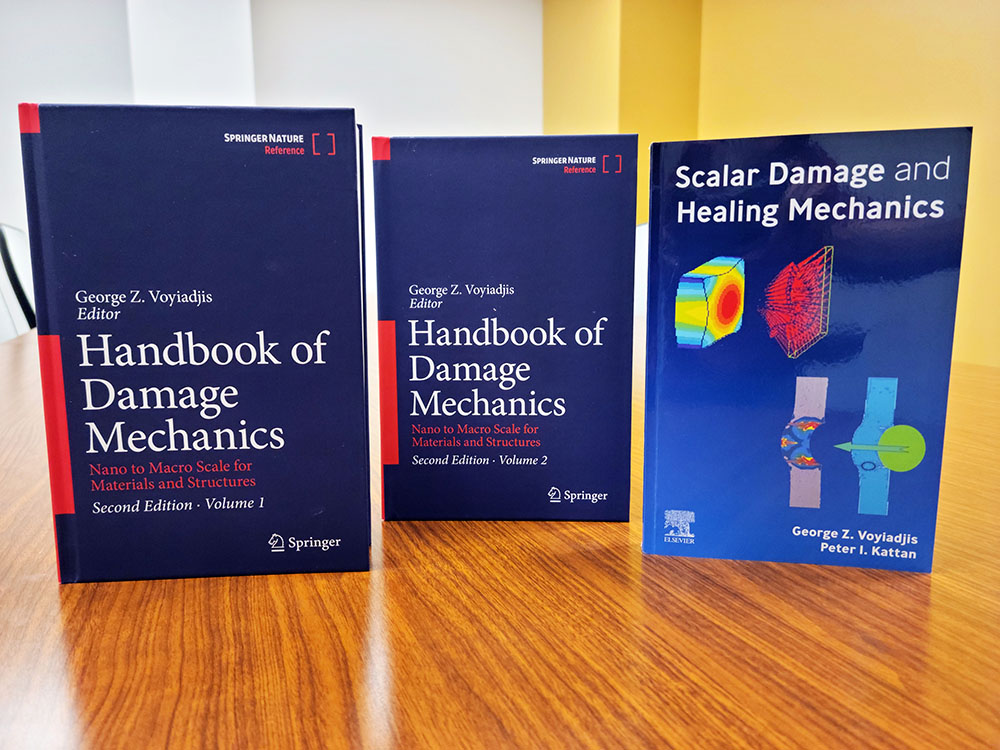 BATON ROUGE, LA –LSU Civil and Environmental Engineering Chair and Boyd Professor George Voyiadjis’ recently enjoyed the publication of a second edition of his books, Handbook on Damage Mechanics Volumes 1 and 2, by Springer Publishing and Scalar Damage and Healing Mechanics by Elevier Science.

In the seven years since the first edition of his handbook hit shelves, many advances have been made in the field.

“A need arises now for a second edition of the [Handbook on Damage Mechanics],” Voyiadjis said. “Damage characterization and mechanics is a broad and highly interdisciplinary field that has been continuously evolving in the last half century. A very select group of internationally recognized authors from both academia and industry and from three continents were selected to write 47 chapters on this topic and its various branches. There is currently one dedicated journal to this topic, as well as a handful of books and thousands of research papers.”

“One of the major features of the Handbook of Damage Mechanics is coverage of the latest research in the new topic of healing mechanics of materials,” Voyiadjis said. “The second edition includes four chapters on this emerging subject. The fundamentals of continuum damage mechanics are presented in nine selected chapters in a section of their own. The handbook integrated knowledge from the theoretical, numerical, and experimental areas of damage mechanics. This book mainly targets graduate students of damage mechanics, researchers in academia and industry who are active or intend to become active in this field, and practicing engineers and scientists who work in this topic and would like to solve problems utilizing the tools offered by damage mechanics.”

Voyiadjis’ other recently published work, Scalar Damage and Healing Mechanics, is the result of a recent upsurge and interest in the subject of damage mechanics, especially using a scalar damage variable. A high percentage of research papers published on damage mechanics employ a simplistic scalar approach. The reason for this is its simplicity and ease of implementation numerically in order to solve practical problems.

“Self-healing smart materials have emerged into the research arena and have been deployed in industrial and biomedical applications, in which the modeling techniques and predicting schemes are crucial for designers to optimize these smart materials,” Voyiadjis said. “In practice, plastic deformation is coupled with damage and healing in these systems, which necessitates a coupled formulation for characterization. Another reason for writing this book is to introduce new concepts in damage mechanics. These new concepts either have appeared only recently in the literature or have never been published before.”

Some selected chapters deal with basic issues of the damage variable and its decomposition. Chapters 16 and 17 cover the new concept of an undamageable material. Other emerging concepts in damage mechanics like the use of damage mechanics templates, self-regenerating materials, and other issues are not presented here but are left for a forthcoming edition of this book. There are more than 100 exercises at the end of each chapter for students to practice.

Voyiadjis is an expert in multi-scale modeling of size effects in materials with different methods of atomistic simulation and continuum-enhanced models, including gradient plasticity and gradient damage. His research activities of particular interest encompass macro- and micro-mechanical constitutive modeling, experimental procedures for quantification of crack densities, thermal effects, interfaces, failure, fracture, impact, and deflect nucleation and evolution in crystalline metals.

Voyiadjis is a Foreign Member of the Academia Europaea (Physics & Engineering Sciences), the European Academy of Sciences, and the European Academy of Sciences and Arts (Technical and Environmental Sciences). He is also a Foreign Member of both the Polish Academy of Sciences Division IV (Technical Sciences), and the National Academy of Engineering of Korea. He is the recipient of the 2022 American Society of Mechanical Engineers Nadai Medal, the 2008 Nathan M. Newmark Medal of the American Society of Civil Engineers, and the 2012 Khan International Medal for outstanding life-long contribution to the field of plasticity. He was also the recipient of the Damage Mechanics Medal for his significant contribution to continuum damage mechanics in 2015.