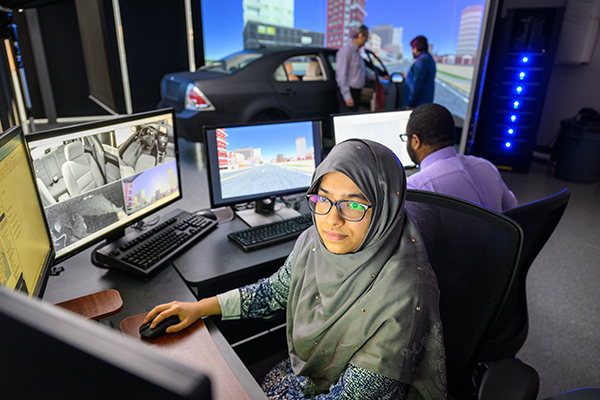 BATON ROUGE, LA – So many things have changed during the COVID-19 pandemic, one being transportation. During the past two years, the need for truck drivers and supplies has ramped up, leading one LSU professor to research improvements to the supply chain while making traffic safety a priority using autonomous vehicles.

Thanks to a $183,000 grant from the Louisiana Board of Regents, Hany Hassan, an assistant professor in transportation engineering in the LSU Department of Civil and Environmental Engineering, is studying the benefits of truck platooning on U.S. highways. Truck platooning is when trucks travel together connected by a computer system, which communicates with the trucks to align speed, acceleration, and braking. Drivers steer, watch the system, and intervene when needed.

“We are expecting this technology to help the freight movement,” Hassan said. “The main benefit of this project is trying to identify what will be the best platoon size—five or six trucks—and see if the trucks should stay in one lane or use two. Identifying the optimum platoon size and configuration is important for the freight sector to maximize its benefits on highways. This will be conducted while taking into consideration driving behaviors of other traditional vehicles that will share the road with autonomous truck platooning.”

According to the U.S. Department of Transportation Federal Highway Administration, platooning reduces air drag, improves fuel economy, and also has the potential to increase vehicle capacity on the highways, particularly along freight corridors. The benefits of truck platooning deployment and operations are improved fuel savings and reduced greenhouse gas emissions; improved throughput, mobility, and road efficiency; and reduced operating costs for the commercial freight industry.

Hassan says that while this new mode of traffic technology is incredibly beneficial, it also comes with its challenges.

“Imagine you are driving and there is a long platooning truck beside you,” he said. “You need to take the next exit. How do you get over? This is one of the scenarios we are going to test.”

Hassan and his Ph.D. student Mohamed Mohamed will put truck platooning to the test in three ways. First, they will use a microsimulation tool called VISSIM that can create any road environment and simulate any type of vehicle that will move on the road network. The software will give measurements to evaluate the impact of platooning. Secondly, they will use the driving simulator lab in LSU’s Patrick F. Taylor Hall, which will allow them to test driver behavior.

“Drivers in the driving simulation lab will be told which trucks are platooning based on their color,” Hassan said. “We want to see if drivers speed up to pass the platoon or even go between the trucks. We want to know if platooning trucks will cause more accidents or reduce the number of accidents.”

Hassan and Mohamed’s final testing method will be in the form of a survey given to drivers from all over the country, asking questions related to the project.

While truck drivers might be afraid truck platooning could put them out of a job, Hassan assures that this won’t happen.

“The project isn’t meant to take away jobs from truck drivers but increase traffic safety, since many truck drivers do get tired and fall asleep while behind the wheel,” he said. “It will take decades before we reach 100% automation. In the near future, however, we will see a mix of autonomous vehicles and real drivers.”