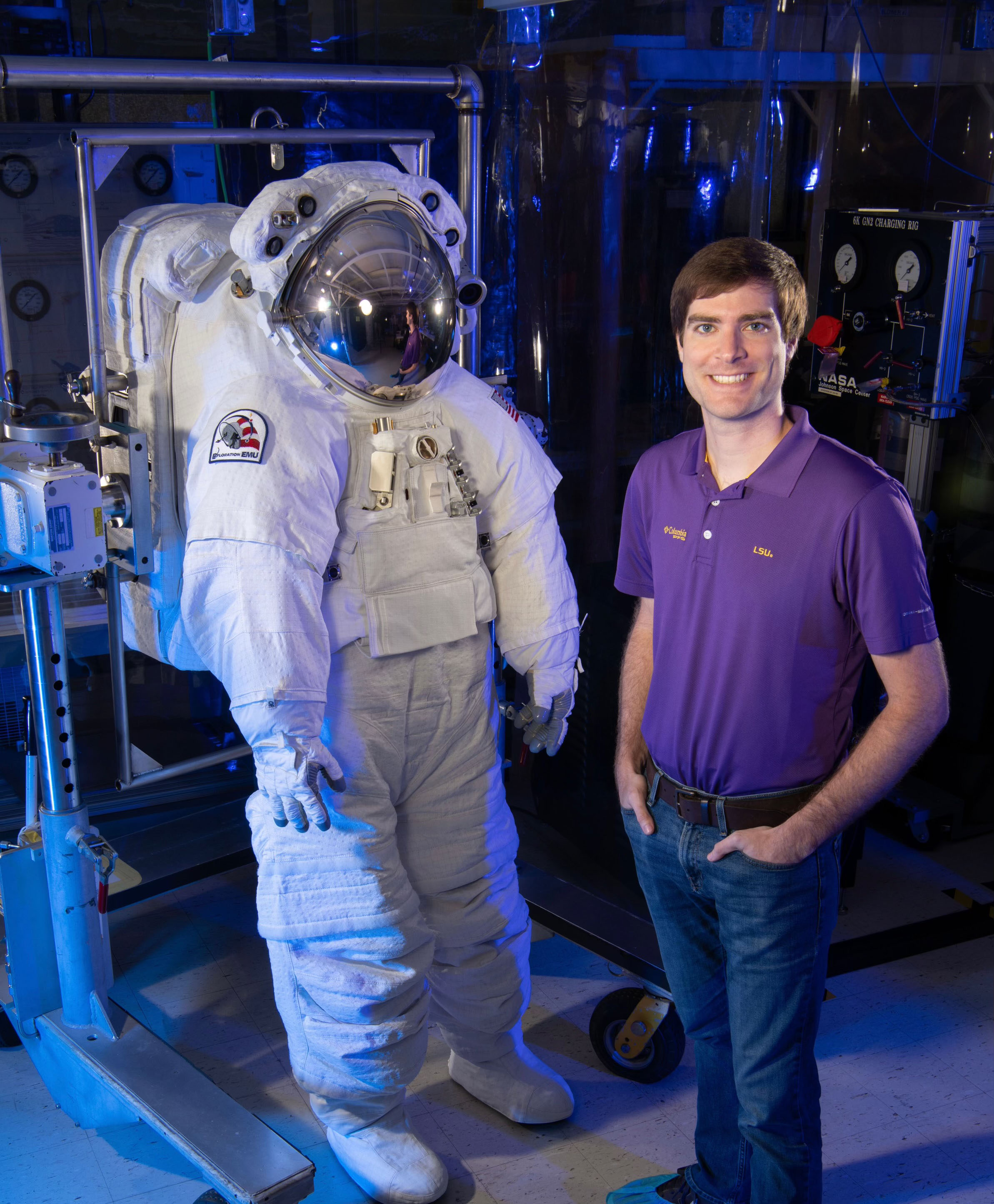 BATON ROUGE, LA – So much has changed in space exploration over the past few decades—bigger rockets, privately-owned aerospace companies, Mars missions—but one thing that hasn’t changed much is the NASA spacesuit. While small modifications have been made to the 1976 spacesuit over the past 15 years, 2023 will see a completely new spacesuit that is not only more inclusive but also as high-tech as they come, for now.

LSU Mechanical Engineering alumnus Kevin Murrell of Gonzales, La., is a mechanical design engineer contracted through Jacob’s Engineering Group at NASA’s Johnson Space Center in Houston, where he has been working with a team of about 100 NASA engineers since 2019 to design the new xEMU (Exploration Extravehicular Mobility Unit) spacesuit. The xEMU suit will serve as a prototype if aerospace companies choose to design their spacesuits using it. Since 2008, NASA has spent $420 million on spacesuit development.

“This has been an ongoing effort for decades,” Murrell said. “The new xEMU suit has more features, more mobility, more battery power, better visibility, and allows for longer spacewalks.”

The original EMU suit came in only one size, which meant that if an astronaut did not fit the suit, they could not exit the International Space Station to do a spacewalk or lunar exploration. One of the requirements for the suit under the Exploration Extravehicular Activity Services (xEVAS) contract is that it fit a broad range of sizes. xEVAS is NASA’s new strategy to procure spacewalking services from private industry. Two companies, Axiom Space and Collins Aerospace, were announced this summer as being eligible to compete in providing new spacesuits for NASA to use in microgravity and on the lunar surface. The design, data, and knowledge gathered from xEMU is being provided to the vendors to assist them in designing a suit to satisfy the numerous requirements that NASA has specified.

Safety is another important aspect of the suit, if not the most important. According to NASA, the greatest concern with the lunar soil decades ago was that it wouldn’t support the weight of a lander or the astronauts inside. Today, they know the greatest danger is that the soil is composed of tiny glass-like shards that could enter the suit and endanger the astronauts. The xEMU suit has a suite of dust-tolerant features to prevent inhalation or contamination of the suit’s life-support system or other spacecraft.

The xEMU is also designed to withstand temperatures of minus 250 degrees Fahrenheit in the shade and up to 250 F in the sun. The pressure garment on the suit can protect astronauts from extreme temperatures, radiation, micrometeoroids, and reduced atmospheric pressure while also giving the astronauts more mobility, a stark contrast to the bunny-hopping astronauts people saw on TV in previous decades.

The new lower torso design includes advanced materials and joint bearings that allow bending and rotating at the hips, increased bending at the knees, and hike-style boots with flexible soles. The upper torso design includes updated shoulder placement and enhancements that allow astronauts to move their arms more freely and easily lift objects over their heads or reach across their body. The new rear-entry hatch allows astronauts to climb into a spacesuit from the back, allowing the shoulders to remain closer together to enable a better fit and reduce the risk of shoulder injuries.

The xEMU helmet features a quick-swap protective visor that shields from wear and tear and also includes multiple voice-embedded microphones that automatically pick up the astronauts’ voices when they speak to a fellow spacewalker, their crewmates, or mission control in Houston.

Before heading off to space, the astronauts must undergo a full-body 3D scan in Johnson Space Center’s Anthropometry and Biomechanics Facility so that NASA and the vendors can match the astronaut to the modular spacesuit components that will provide the most comfort and broadest range of motion.

“Practicing on Earth helps, but the difference in gravity, pressure and environmental exposure is difficult to truly replicate on the ground,” NASA said.

Another major component of the xEMU spacesuit is the Portable Life-Support System (PLSS) that astronauts wear during spacewalks and moonwalks. Murrell has been working on the new 300-lb. PLSS that houses the suit’s power and breathable air and removes exhaled carbon dioxide and other toxic gasses, odors, and moisture from the suit. The PLSS also helps regulate temperature and monitors overall suit performance, emitting warnings if resources fall low or if there is a system failure. Its duplication of electronic and plumbing systems increases safety and could increase spacewalk durations.

“I have specifically been working on avionics, the boxes and hardware that house communication equipment, controllers for different systems, and have created protective covers for harnessing and cables,” Murrell said. “I did design work on flexible circuit boards for the battery charging system and did some ground-up design of latches that keep covers closed.”

Once the total spacesuit redesign has been completed, Murrell will work on a lunar landing guidance system, which will have functioning test flights in 2023.

“I have thoroughly enjoyed working on this and being surrounded by really cool people and working in amazing labs,” he said. “It’s awesome to see aerospace equipment everywhere. Johnson Space Center is a fun place to work.”