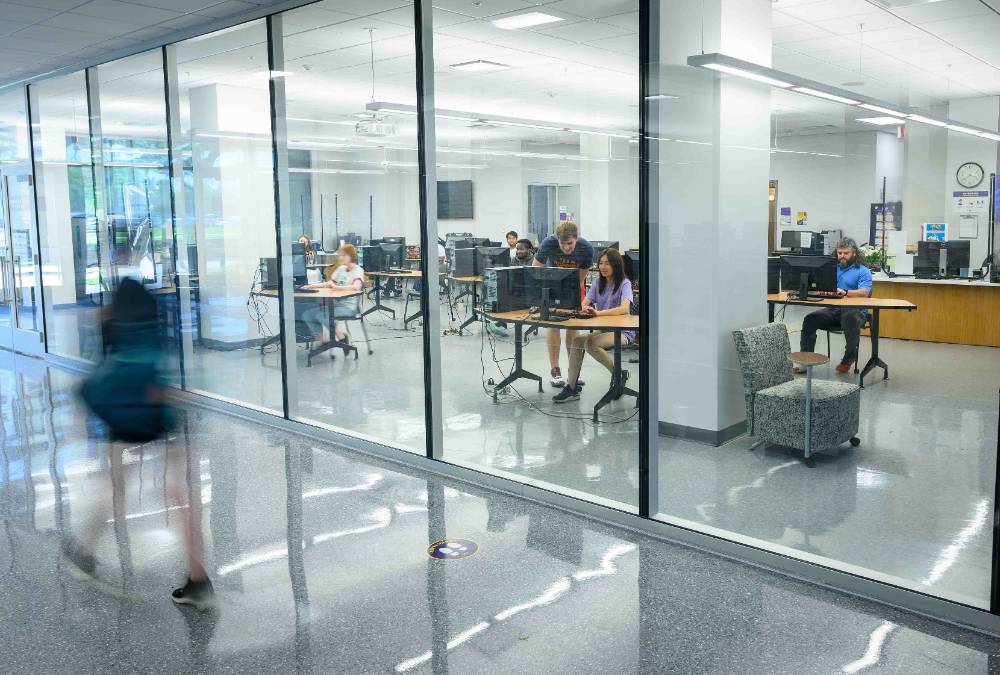 BATON ROUGE, LA –  Since 2004, LSU’s Communication Across the Curriculum (CxC) program has given LSU students, particularly College of Engineering students, the opportunity to improve their communication skills for a greater chance of success in the working world. In its 18 years of existence, CxC has helped thousands of LSU students and has given out hundreds of Distinguished Communicator awards to those students who excelled in the CxC Distinguished Communicator program. Here’s how CxC began and where it stands today.

Nearly 20 years ago, an LSU Chemical Engineering alumnus made a donation to get the CxC program started. The program’s mission is to support students by cultivating multimodal skills in writing, speaking, and visual and technological communication. CxC is comprised of a multidisciplinary team of teachers, researchers, scholars and practitioners committed to investigating the connections and interactions between deep content learning and critical communication skills development within college classrooms across the disciplines. The CxC team applies Communication-Intensive (C-I) pedagogy within undergraduate courses at all levels and spanning all disciplines from STEM to arts and humanities.

While the program was created for all LSU students, the first CxC studio opened in the College of Engineering in 2005 at the direction of Zaki Bassiouni, former dean of the college and former professor and chair of the Craft & Hawkins Department of Petroleum Engineering, and under manager Warren Hull, a retired mechanical engineer and Air Force colonel. Boz Bowles, who joined CxC as a technical communications instructor in 2006, is now the assistant director for CxC and the Chevron Center for Engineering Education located in Patrick F. Taylor Hall.

“Most students in engineering who want to be competitive in the job market are already doing the things that CxC requires, which are excellence in C-I courses; leadership experiences; team-working experiences, such as internships, co-ops, study abroad, REUs, or service-learning events; and work with a faculty advisor whom the students choose themselves,” Bowles said.

A huge part of the CxC program is the Distinguished Communicator program, which Bowles believes is an opportunity for students to demonstrate the potential return on investment in them as employees. It also benefits students entering graduate programs.

“The students’ audience doesn’t have to trust what is written on a resume or CV,” Bowles said. “Potential employers can visit the student’s website and see for themselves by reading their papers and speeches and seeing their designs. It’s each student’s best-work showcase.”

Each year, the Distinguished Communicator Award is given to those students who excel in the program.

This year, CxC wanted to give special recognition to some of its pioneers in the College of Engineering by presenting them with a Distinguished Communicator medal for their years of dedication and hard work in the CxC program.

“Sometimes faculty not only do what’s required for teaching but they go above and beyond,” Bowles said. “Those faculty at the very beginning, before CxC was an established program, took a chance on reimagining their entire teaching. Those are the people that make CxC work.”

Three of those faculty members, whom Bowles calls his “all-time favorite humans,” recently received this medal. One was Warren Waggenspack, a former associate professor in mechanical engineering and former director of the ME undergraduate program who also served as associate dean when CxC was created in 2005. He gave Hull the green light to open the Engineering Communication Studio.

“Without Warren Waggenspack, there would be no CxC,” Bowles said. “He was really our pioneer and champion in engineering. Warren was an early participant in our advisory council and faculty summer institute and has led workshops for faculty. He was also instrumental in getting a lot of the studio’s first equipment, helping write grants, and co-writing a dozen or so papers with Warren Hull and myself.

“I personally think his favorite activity while on campus was to stroll through the Chevron Center to interact with the students. Even when he was associate dean, we could expect him to visit often and check in on how projects were going.”

Former LSU Construction Management Instructor Paige Davis also received a medal for her hard work as a Distinguished Communicator advisor, for being one of the first faculty to certify her CM 1020 course, and for helping establish what technological communication could be in engineering. She also worked with CxC and other C-I faculty on the Juno project, an interactive museum installation with a giant 3D-printed model of the Juno probe, printed and painted by LSU students.

“Paige quickly became one of the most popular Distinguished Communicator advisors,” Bowles said. “She had so many students that she had to meet with them in groups. She and I also developed the Encounter Engineering in Europe (E3) program, which she totally directed and did all of the hard work for.”

Harry Toups, a former instructor in the Dow Chemical Unit Operations Laboratory, received a medal for his dedication to CxC and how he embraced the program’s approaches to pedagogy.

“He was a master teacher with enough enthusiasm to light a major city,” Bowles said. “I don’t think he has ever said the word ‘no’ to anyone associated with CxC. He ended up being involved in almost every faculty development event we ever had. He has been there for literally everything we have asked him for. Working with him was always a joy.

“These engineering faculty have recently retired and will leave huge holes in our network. We will survive without them, but it won’t be easy. Without them, there wouldn’t be a CxC to survive.”

Bowles said the secret to CxC is the students who are willing to participate and the faculty who regularly go above and beyond to teach the students.

“I’m just lucky to have a front seat to all of it,” he said.