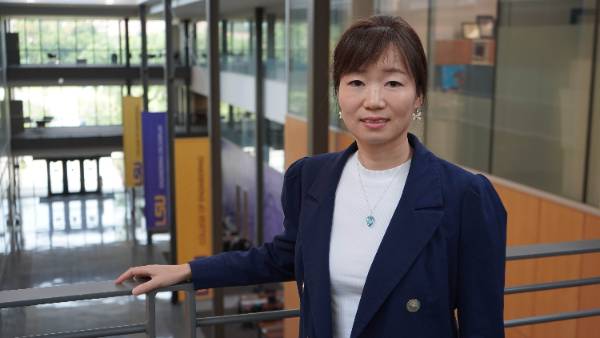 BATON ROUGE, LA – LSU Civil and Environmental Engineering Assistant Professor Chunli Dai recently received a $68,740 grant from the California Institute of Technology for her research on sea level rise, which could affect every person on the globe.

“Sea level rise is a hot topic,” Dai said. “We are concerned about land loss and increased flood risk caused by sea level rise. The low-lying areas, such as Bangladesh, tend to be largely flooded with just a small increase in sea level rise. Identifying these areas will help people strategically migrate and adapt to the changing climate.”

“Additionally, we will compute ocean circulation using the MIT General Circulation Model and the Estimating the Circulation and Climate of the Ocean (ECCO) project,” she said. “Our goal is to deliver objectives.”

These objectives include gaining understanding of how current probabilistic regional sea level projections can be improved by the use of time-correlated forward ice-sheet and GIA model projections, as well as understanding how ocean circulation around the Antarctic Ice Sheet impacts grounding-line (the point at which glaciers and ice shelves start to float) retreat of ice streams and how that translates into specific patterns of predicted coastline migration around the world. Her research aim is also to understand the impact of a generalized representation of mantle creep on both the evolution of grounding-line position in the West Antarctic Ice Sheet and coastal migration around the world.

Lastly, Dai will quantify the impact of the improvements in grounding-line dynamics and understand the associated consequences for sea level projections and coastline evolution around the world.

“The framework we propose will allow us to perform highly flexible, NSLC-T interactive, and efficient updates to the probabilistic forecasting product during the course of the four-year funding of the proposal,” Dai said.

Dai will develop algorithms to process the large volume of high-resolution imagery and Digital Surface Models to create a high-resolution global coastline and coastal slope, and she will continuously improve the algorithms by synergizing the most advanced technology developed in other related projects using commercial satellite imagery. She will also develop algorithms for generating coastlines with different tidal heights and analyzing the coastal tide range.

Sea level rise may be inevitable, but Dai’s research can at least show the world the most at-risk areas when persistent flooding occurs.