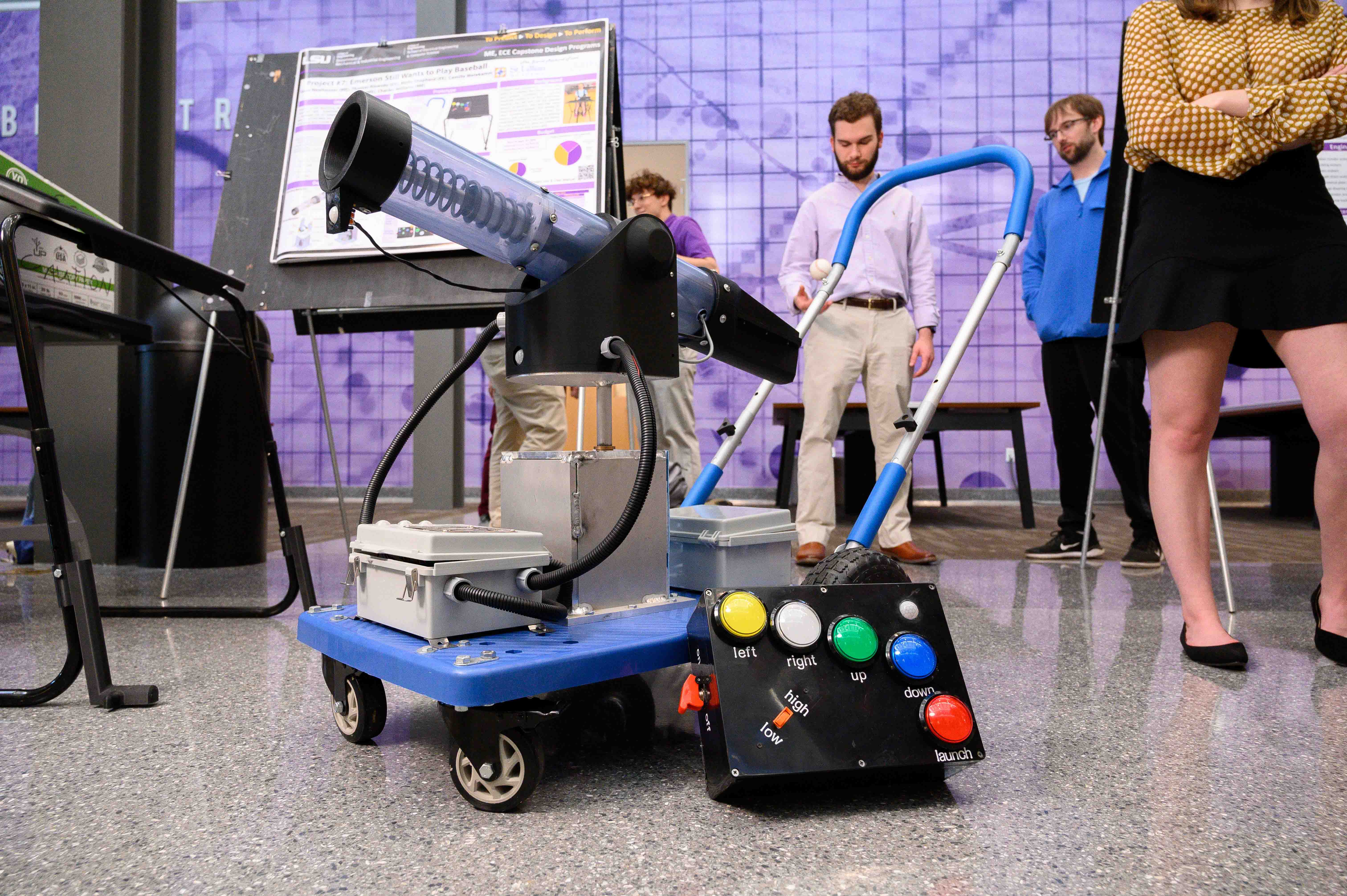 BATON ROUGE, LA – Her eyes squint to sharpen her focus while her mouth curves into a smile and her fingers push down on the controller, sending a baseball flying through the air. For the past year, 14-year-old Emerson Allen has patiently waited for this moment when she would finally be able to play ball with her classmates.

Allen, a native of Baton Rouge, was born with cerebral palsy, a condition that affects movement and muscle coordination. Wanting to be a part of school activities and participate on her Miracle League baseball team, Allen and her school, St. Lillian Academy in Baton Rouge, collaborated with LSU Engineering students on a project that would allow her to launch a baseball into the air.

Since the fall of 2021, a team of five LSU Engineering seniors have worked on this capstone design project under the supervision of LSU Mechanical Engineering Instructor Dave Giurintano. The team members include ME seniors Camille Wetekamm of Mandeville, La.; Sven Newhauser of Baton Rouge; Charlie Williams of New Orleans, La.; and electrical engineering seniors Molly Shepherd (team captain) and Thomas Rinaudo, both of Baton Rouge.

“Emerson is super sweet,” Wetekamm said. “Every time we meet her, she says, ‘Ohhhhh yeah.’ We know we have to finish this project for school, but we also have this alternate driving force, which is to finish it for Emerson. This is going to impact her life and potentially other students at St. Lillian. It’s a really special project that is rare in the capstone realm.”

Elissa McKenzie, one of the founders of St. Lillian Academy, reached out to the College of Engineering to see if students would be able to build something for Allen, allowing her to participate in baseball games.

“Every year for the past 10 years, I submit a number of projects to the capstone groups,” McKenzie said. “We’ve done numerous projects with LSU, and the capstone teams have always come up with such amazing and creative ideas that have helped some of our students. What these LSU Engineering students do for us is incredible.”

When the LSU capstone team attended one of Allen’s baseball games, they saw that the kids were throwing the ball about 20 feet, which told them that the ball launcher they were going to design didn’t need to be very fast. The launcher is a two-part system that uses a motorized PVC pipe and controller. The 3 ft.-by-3 ft. device acts as a giant pinball plunger attached to a motor and linear actuator that can be programmed for ball-launch distance by using a high/low switch.

Allen uses the controller, which was designed specifically for her left-handed range of motion, to press buttons that send a signal to the launcher telling it to throw left, right, up or down. Allen chose the colors for each command button on the controller, with red as the launch color. The team also added safety sensors so that the ball launcher won’t work if anyone is within 10 feet of its front.

“We designed the user interface for Emerson to be challenging but to also give her a sense of accomplishment when the ball lands where she wants it to land,” Rinaudo said.

St. Lillian plans on keeping the launcher device at the school for Allen and other students who may be able to use it in the future.

“It’s so great to do a capstone project that has an effect on someone’s life and will change the way they can interact with friends,” Wetekamm said.

“It’s very exciting,” Shepherd said. “She’s very excited to use the launcher. She made us all go out there and catch the ball, and she learned all of our names, so it was a very good experience to see her enjoy a device that we put a lot of effort into.” 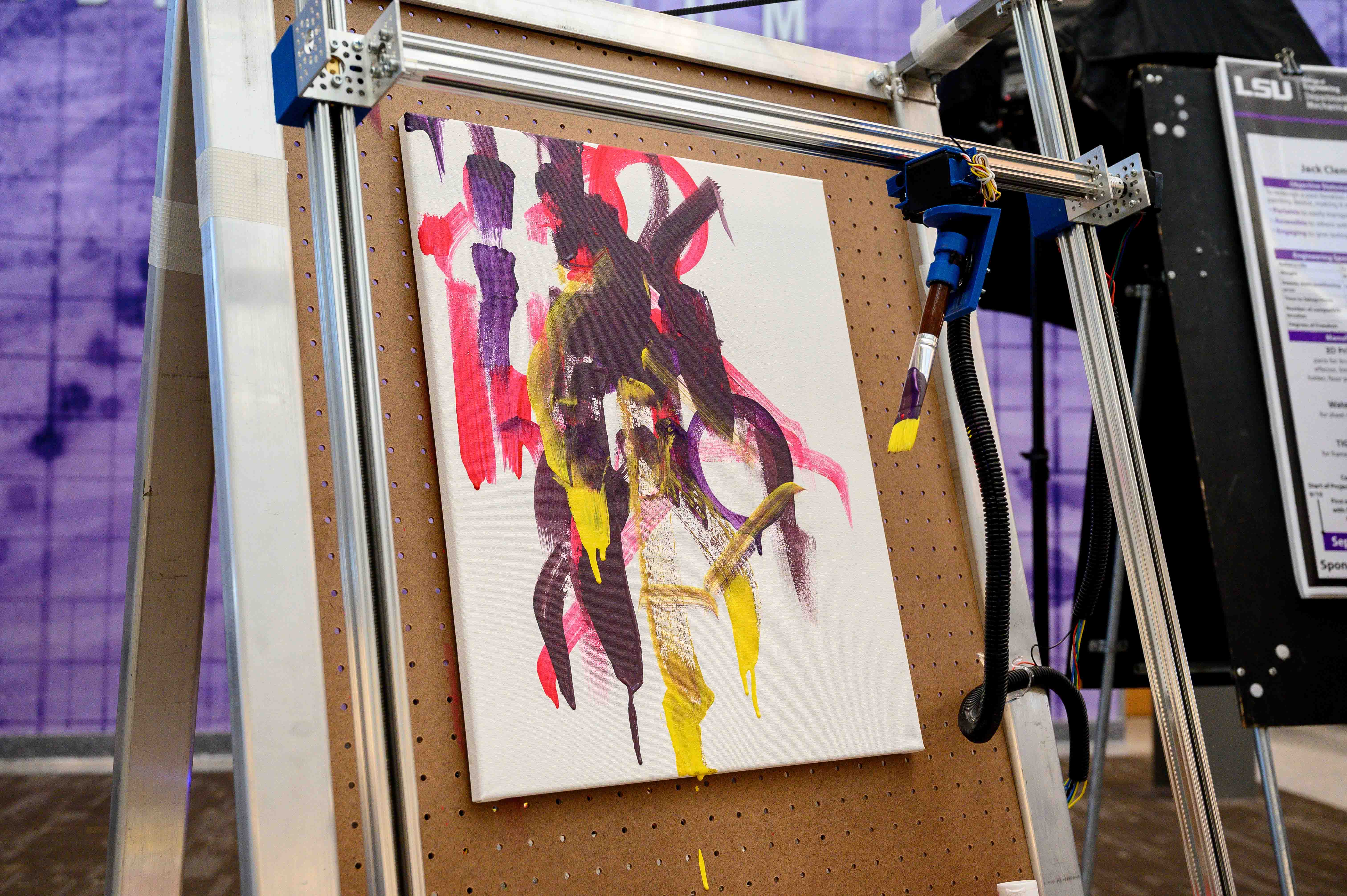 A team of LSU Mechanical and Computer Engineering students recently completed its senior capstone design project, which was to design a program that allows 18-year-old William Bradford, a former student of Our Lady of the Lake Children’s Hospital Children’s Developmental Center at McMains, to paint on a canvas using only eye and head movements. Bradford, who has cerebral palsy and is confined to a wheelchair, loves to paint and is able to do so more easily now thanks to these four LSU students and their Art-Eaux-Matic project.

Computer Engineering seniors Timothy Curol of Lake Charles, La., Emily Vu of Metairie, La., and ME senior Jack Clement of Iowa, La., and ME junior exchange student Ewan Robertson of Scotland, have worked on this painting project since the fall of 2021. Using a computer screen attached to his wheelchair, Bradford is able to use his eyes and head to choose colors and “tell” the paintbrush which direction to move, creating brushstrokes on the canvas that mimic what Bradford sees on his screen.

“I helped with the software design of this project,” Curol said. “We developed an app that works with eye gaze and head switch control to paint on a computer screen, then send that information to the device. It was programmed in Java coding language.”

Vu worked with Curol on the codes for the app and for moving the motors, while Clement and Robertson worked on getting the brush to move. Clement created the device that rotates the brush on and off the canvas, and Robertson designed the part that moves the brush up and down or side to side on the canvas.

“This project was so much fun,” Vu said. “I just like seeing the paint on the canvas, and we all became friends through the process. It’s really nice to see William have fun as well.”

“William has always loved to paint,” Bradford’s mother Anne Marie said. “This now gives him the opportunity to do things without so much of my help and him doing it solely on his own, which he likes. This is such an amazing success and win for all kids with a disability.”