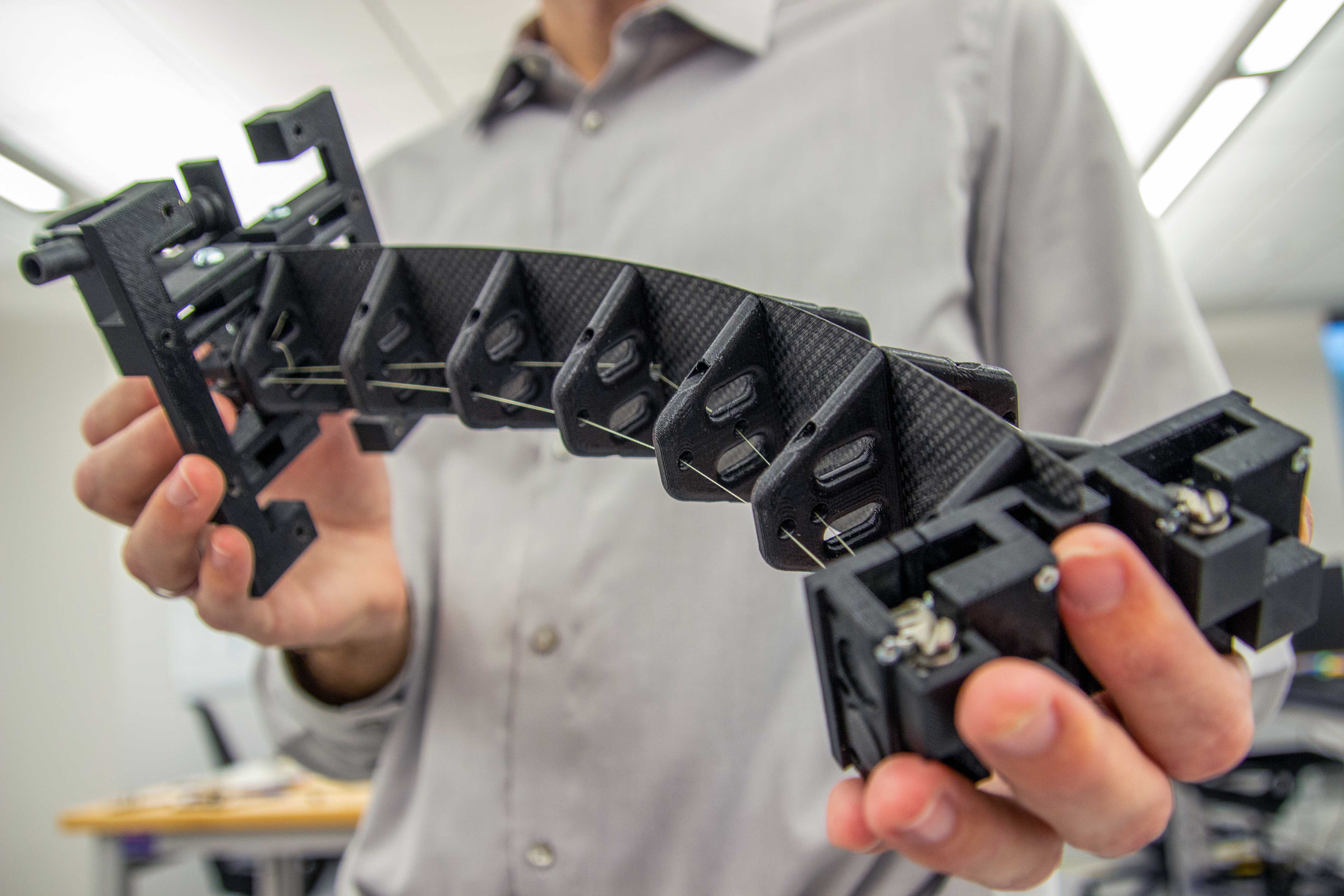 BATON ROUGE, LA – Hard, cold metal is usually what comes to mind when one imagines a robot. While these rigid automatons have their advantages, researchers are now exploring “soft” or continuum robots that can provide flexibility and compliance where traditional robots cannot. One such researcher is LSU Mechanical Engineering Assistant Professor Hunter Gilbert.

Thanks to a grant from the Board of Regents and the Louisiana Space Consortium, Gilbert and his ME graduate and undergraduate students will spend one year constructing a soft robot in his lab in Patrick F. Taylor Hall. The first six months of the project will focus on modeling, simulation, and design, while the latter six months will focus on experimental evaluation using a newly constructed testbed.

“Right now, we’re still at the very fundamental stages, so we’re focused at a small laboratory testbed scale,” Gilbert said. “Developing something that is going into space can come at a later date, once we have the fundamentals down. We have to understand it before we try to scale it up.”

Gilbert’s research supports the Space Technology Mission Directorate through the development of robotics capabilities addressing critical needs in on-orbit servicing, assembly, and manufacturing. Langley is helping guide how the robot can be used and what the requirements are to actually use it in space.

“One of the big problems in getting a robot to space is it must be lightweight, and we think that the particular technology we’re investigating can be made very lightweight,” Gilbert said.

Soft robots have their advantages besides being lightweight. One is that bumping into things won’t destroy the robot or the environment it’s operating in since the robot is made of carbon fiber, which makes it bendable.

LSU ME Assistant Professor Genevieve Palardy, an expert in composite materials, is involved with the project and recommended using carbon fiber for Gilbert’s soft robot.

“Carbon fiber-reinforced polymers are lightweight and their properties, such as bending rigidity, are tailorable according to fiber orientation,” Palardy said. “This allows to create components that are bendable in specific directions while being more rigid in others.”

Soft robots are also being investigated for surgical use in the medical field, as well as for industry inspection and maintenance.

“There are definitely also safety advantages in having a soft robot,” Gilbert said. “A large rigid robot could knock someone out and possibly kill them, which has happened in factories. Soft robots tend to be safer for use around people.”

Another advantage of using a soft robot is there are no joint or sealing surfaces where dust, dirt, and water can get inside, which would be a problem on a Martian or lunar surface.

“A traditional robot has a lot of external joints that require seals to keep dirt and dust out,” Gilbert said. “If you have a robot that bends, there are fewer places where these unwanted environmental contaminants can get in.”

Soft robots have their challenges, but Gilbert and his team are determined to iron out the kinks.