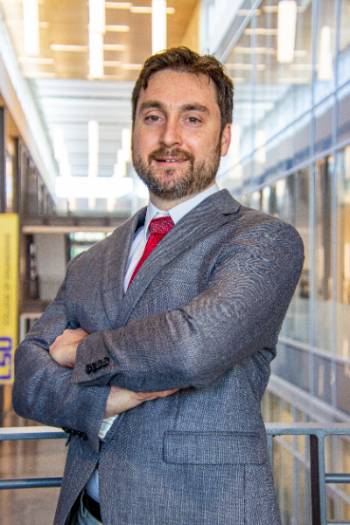 The grant is $150,000 per year to be distributed over five years, covering salary and research expenses. Awardees were selected based on peer review by outside scientific experts.

Plaisance’s funded project is titled, “Development of an Integrated Multiscale Methodology for Simulating Electrocatalysis at the Metal Oxide-Electrolyte Interface.” Its outcome would allow researchers to accurately simulate how electrocatalysts carry out important reactions, such as oxygen evolution and carbon dioxide reduction. This would, in turn, give insight into how these catalysts work and what currently limits their performance. That information could then be used to improve these catalysts so they find widespread use in applications such as the storage of intermittent renewable energy and reduction of carbon dioxide emissions.

“Current electrocatalysts for oxygen evolution and CO2 reduction suffer from low efficiency,” Plaisance said. “In order to improve these catalysts, we need to understand how they work, and more importantly, what limits their performance. Current simulation methods are either not accurate enough to account for the interactions between the atoms and molecules [at the electrochemical interface] or they are too expensive to explore the millions of dynamical molecular configurations of this interface.

“The method we will develop will be both accurate and inexpensive. This is possible because much of the information in the accurate simulations is redundant and is inefficiently recomputed over and over. For example, 99 percent of the electronic structure of a single water molecule is the same no matter where that water molecule is and what surrounds it. Our strategy is to identify that 99 percent, compute it only once, and then spend our effort computing the remaining one percent that accounts for the dynamical interactions.”

Plaisance acknowledges that this award will have a profound effect on his career going forward in terms of the recognition it will bring him within the catalysis and electrocatalysis communities. At the same time, he is mindful of the time and work it has taken to reach this level of achievement.

“I think a big thing that helped me win this award is that I approach science from a perspective of learning and thinking about things instead of short-term productivity,” Plaisance said. “I think there is a lot of pressure, especially for young scientists, to focus on productivity, which leaves less time for one to learn new things and think creatively about the problems one is facing. I developed the ideas that went into this proposal over the past 15 years through what seemed at the time to be useless pondering and tinkering. But it is these things that allow you to think outside the box and develop new ways of looking at problems that no one else has thought of.

“Another big part of me winning this [award] was my time as a postdoc in Germany. At one of the lowest points in my career, Professor Karsten Reuter (director of the Theory department at the Fritz Haber Institute in Berlin) took me on as a postdoc at the Technical University of Munich. Professor Reuter is one of the world leaders in multiscale modeling of materials, and during the three years spent in his group, I was exposed to countless new ideas, many of which inspired parts of this proposal.”