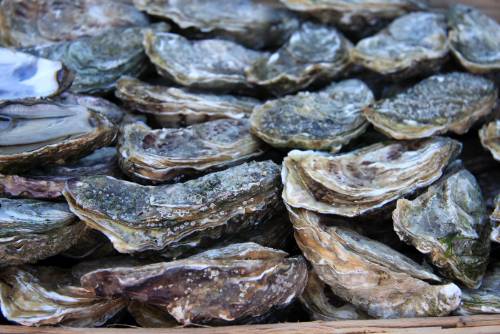 BATON ROUGE, LA – Each year, nearly 2 billion oysters are consumed around the globe. The Gulf of Mexico produces more oysters than anywhere else in the United States, with Louisiana accounting for more than a third of the nation’s annual harvest. This means plenty of people along the Gulf Coast are eating raw oysters; unfortunately, some of these oysters carry diseases without the consumer knowing.

Thanks to a $750,000 award from NASA and a $750,000 matched grant from the Louisiana Board of Regents, LSU Civil and Environmental Engineering Professor Zhiqiang Deng is working on a project that will allow oyster harvesters to detect oyster beds that are infected with norovirus and vibrio vulnificus, also known as flesh-eating bacteria.

“This project is meant to decrease the number of people getting sick and also decrease oyster recalls,” Deng said. “The project will aid in the economic development of Louisiana by reducing costly oyster ground closures and recalls, thereby increasing oyster production.”

The project’s objectives include converting NASA satellite remote-sensing images to parameters indicating the environmental health of oyster harvesting waters; creating models that incorporate the remote sensing parameters to forecast the oyster safety risk level; and developing tools for automating the conversion, transfer, and sustained use of the NASA satellite remote-sensing data.

“Like weather forecasts, our models will show which oyster beds need to be looked at and have samples taken,” Deng said. “If the samples show a high amount of bacteria, we will notify the government and they will shut it down.”

The SAFE Oyster project will not only help the Gulf Coast oyster industry, which boasts an annual economic impact of $220 million from Texas to Florida, it will also decrease the number of hospitalizations due to acute gastroenteritis and the high cost of treating it.

Since 2018, nearly 1,000 people along the Gulf Coast have become infected with vibrio vulnificus, with half losing their lives and some survivors losing limbs. While the norovirus causes diarrhea and vomiting, vibrio eats away at skin and muscle tissue and is more fatal. Vibrio vulnificus infection is the leading cause of death related to seafood consumption in the U.S.

For the past 20 years, California has banned the sale of raw, untreated Gulf oysters from April to October, the months when vibrio vulnificus bacteria is more likely to be present. Hence, the old adage to only eat oysters in months containing the letter “r.”

Deng’s project hopes to keep “the canary of the ocean” viable for safe human consumption in an industry that has taken some hits over the years.

The oyster industry has been a staple on the Gulf Coast for generations, though it has seen its fair share of hard times. Most recently, the Bonnet Carré Spillway openings in 2018 and 2019 allowed an unprecedented amount of freshwater intrusion into the saltwater oyster beds, destroying millions of oysters.

According to Louisiana Wildlife & Fisheries Oyster Program Manager Carolina Borque, Louisiana can normally harvest up to 12.3 million pounds of oyster meat in one season, which makes up 40% of the country’s supply. However, with the spillway opening in 2018 and 2019, the oyster supply decreased to 11 million pounds in 2018 and dwindled to just 7.8 million pounds in 2019. This has led to oyster shortages and soaring prices. Oysters that normally went for 25 cents each went up to more than 60 cents each.

Even before this, the Deepwater Horizon oil spill in 2010 killed an estimated 4-8.3 billion oysters along the Gulf Coast.

Other factors besides the norovirus and vibrio vulnificus ailing the oyster industry are changes to freshwater flow along the Gulf, sedimentation from more frequent storms, inconsistent replacement of oyster bedding material (called clutch), and heavy fishing. A decrease in oysters could not only affect oyster harvesters and restaurants, but also industries that use the shells for such things as chicken feed supplement.

There are also scenarios, such as the one involving Sabine Lake on the Louisiana-Texas border. The lake supports one of the largest unharvested oyster reefs in the Gulf that stretches approximately four square miles. There has been a ban on oyster harvesting in the lake for more than 70 years since it was completely harvested in 1904. While Louisiana would like to harvest their side of the lake, Texas balked because harvesting would destroy the 10-foot-high oyster reef and, in turn, deplete the fish population in the lake. Oysters keep the fish population healthy by filtering the water (just one oyster can filter 50 gallons of water a day).

The 2020 season has not seen much public harvesting for a couple of reasons.

“There’s not much to harvest due to the flooding in 2019,” Borque said. “Plus, the pandemic has really hit the restaurant industry hard.”

New Orleans, a hot spot for oysters and tourists, has been almost completely shut down since March, leaving oyster farmers without a place to sell their product. The only saving grace has been oyster leases and caged oyster farming, a more modern way of gathering the slimy gems.

“Ninety percent of restaurants supply these ‘boutique’ oysters now that come from caged farming,” Borque said. “They are a more perfect shape with amazing meat and can be salty or not. They haven’t been too big in Louisiana yet because so many harvesters are gathering oysters in a more traditional way.”

The numbers on how this year’s harvest has been affected are expected to come out in late August.

“I’m sure those numbers will decrease until everything goes back to normal,” Borque said. “We have no idea what’s going to happen. It could be good next year since the oyster beds are being given time to rest and multiply.”

As for the SAFE Oyster project, Deng and his team will work to make sure the oysters that do end up on the half shell are safe to eat, allowing anyone who eats Gulf oysters to simply enjoy their dozen. Let’s hope there’s no shortage on ketchup or crackers.