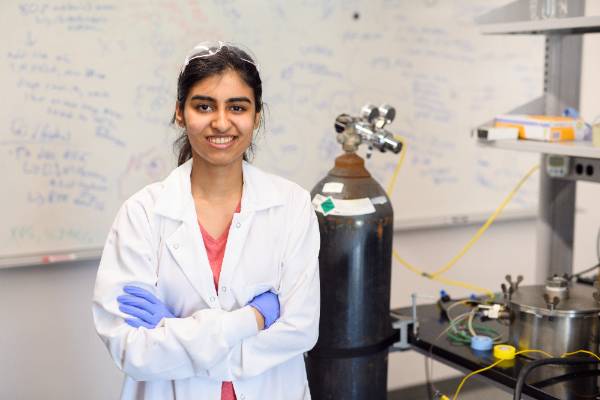 BATON ROUGE, LA – If all goes well, LSU Chemical Engineering PhD student Varada Palakkal will fly to San Francisco in November to accept a graduate student award she was recently selected to receive from the American Institute of Chemical Engineers (AIChE) Materials Engineering and Sciences Division Area 8A (Polymers).

For the past five years, Palakkal has worked in LSU ChE Assistant Professor Chris Arges’ lab studying energy conversion technology and ion exchange membranes, which she will speak on during the graduate student symposium on the West Coast, which could be virtual depending on the COVID-19 situation.

“My talk is going to be on thermally regenerative flow batteries, energy storage and energy conversion technology,” she said. “The most interesting aspect of this technology is that it’s made of inexpensive materials and we were able to fabricate these ion exchange membranes and polymeric materials that were able to improve the battery’s performance significantly in comparison to other reports and literature.”

As a researcher, Palakkal has published three first-author papers and has co-authored three papers, as well as obtaining a patent application for a project dealing with resin wafers.

Palakkal, who defended her PhD in March and graduated from LSU in June, recently moved to Austin, Texas, where she has already begun her postdoctoral fellowship in ChE at the University of Texas at Austin.

Prior to coming to LSU, Palakkal received her bachelor’s in ChE from the National Institute of Technology in India. She did an internship at Argonne National Lab in Illinois for seven months and made ion conductor binders for resin wafers for ionic separation technology, which entailed removing salts from water. She has also done research in Israel and presented her research in Seoul, South Korea, and Beijing, China.

“I was looking at good ChE programs and professors’ profiles and I was looking forward to pursue research on energy-water nexus technologies,” she said. “I also really wanted to work with Arges. He is an amazing mentor and very encouraging. He’s very inspiring to work with. He has creative ideas and encourages you to work independently on your projects. I always had the freedom to take a project where I wanted to with his guidance along the way.”

“I’ve been very fortunate to be her PhD advisor,” Arges said. “I know she’ll be a successful LSU alum.”