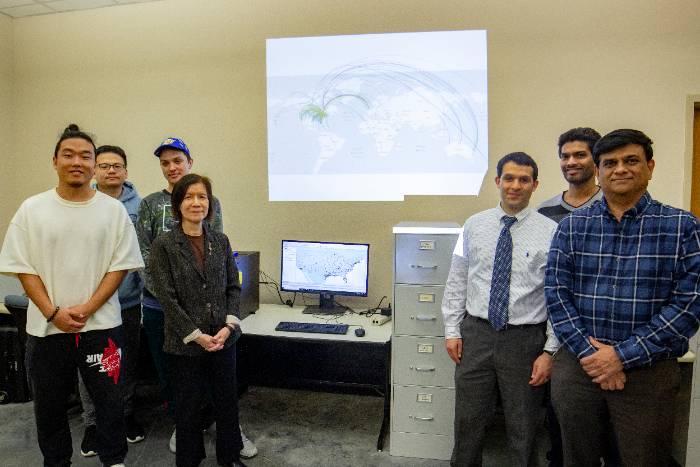 BATON ROUGE, LA – Hurricanes and flooding are an inevitable part of living in the South, but what if there were a way to speed up the reconnaissance time after a natural disaster?

“Texas is driving technology and really advancing,” Jafari said. “We want to learn how people use drones and social media to collect and interpret data to make decisions and what’s stopping them from making a better, faster decision. EOCs are the heart of this proposal.”

EOCs collect and disseminate information to keep people safe, deciding where evacuations will take place and where to locate resources, among other things. After Hurricane Harvey hit Houston in 2017, the Beaumont EOC used drones to conduct reconnaissance, which Louisiana picked up on.

“With a drone, you actually have to go to the site, set up the equipment, perform the survey, bring it back to the EOC or office, analyze it, then make a decision,” Jafari said. “That process could take a very long time, even days, when a decision is needed that afternoon. Where can we improve that workflow? Currently, you can actually stream your drone video to the Internet, so maybe we need to bring that technology here. We need to figure out where the gaps are and use technology that is faster and more reliable.”

To further identify where the gaps are, Jafari asked Lam to join him to look at how often residents of Beaumont and Houston Tweeted about the state’s infrastructure.

“Are they saying ‘levee breached’ or ‘bridge damaged’?” Jafari said. “We want to be able to see what they’re saying and what images or videos are posted and if we can extract any info that the EOCs can use. Most people have a smartphone and took photos of their neighborhoods during the 2016 flood and posted those pictures on social media saying, ‘Look how high the water is on my street.’ We want to be able to collect and use that information.”

To attain this pertinent information, Lam and a team of students are taking a look at 45 million Tweets that went out after Hurricane Harvey, along with ones from Hurricane Barry.

“We’re focusing on infrastructure-related Tweets,” Lam said. “What are the words relating to this—‘damage,’ ‘no power,’ etc. Once you retrieve it, we still need a person to look at the context. It’s a lot of work.”

Jafari said Tweets are more real-time than what one would get from a stream water-level gauge that is miles away. Gathering information quickly is important because people will change the natural environment and rebuild as soon as they can.

“In an emergency, the DOTD (Department of Transportation and Development), DEQ (Department of Environmental Quality), CPRA (Coastal Protection Restoration Authority), and GOHSEP (Governor’s Office of Homeland Security and Emergency Preparedness) are in the midst of a firestorm,” Jafari said. “We have to make decisions fast. We’re the researchers who come behind and say what we can do better?”

Though hurricane season doesn’t start until June, it’s urgent to get the ball rolling on projects, such as the one Jafari and Lam are working on.

“A disaster is no time to try new things,” Jafari said, “which is why we need to figure it out ahead of the next one.”