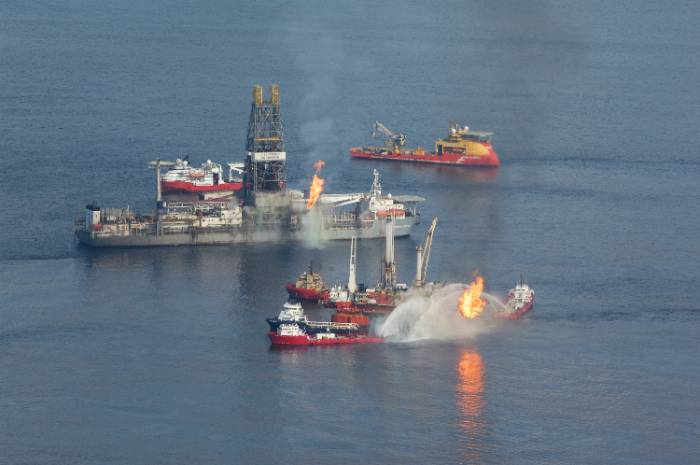 BATON ROUGE, LA – It’s hard to believe, but today marks the 10-year anniversary of the Deepwater Horizon oil spill that so deeply affected South Louisiana. It took years to close the well and even longer to clean up the oily mess that affected the native wildlife and way of life for many Louisianans in the seafood industry.

If there was anything to gain from this disaster, it was realizing the importance of safety in the drilling industry, which is what LSU Petroleum Engineering Professional-in-Residence Wesley Williams teaches his students who plan on entering the oil and gas industry.

For those needing a refresher, Deepwater Horizon was the name of an oil rig in the Gulf of Mexico, where the BP-owned Macondo Prospect exploded on the night of April 20, 2010. High-pressure methane gas from the well expanded into the marine riser and rose into the rig, where it exploded, engulfing the rig and killing 11 workers. The rig finally sank on April 22, 2010. Oil spilled into the Gulf for 87 days at an estimated flow-rate of 1,000-5,000 barrels per day. The U.S. government estimated that a total of 4.9 million barrels of oil spilled into the Gulf.

Besides the loss of life, the aftermath of the explosion was extensive. Skimmer ships, floating booms and controlled burns were not enough to remove all of the oil from the Gulf. The oil flowed all the way to south Florida, where it became embedded in the sandy beaches. In 2013, 4.9 million pounds of oily material were removed from Louisiana beaches. Marine life, such as dolphins and fish, were dying in record numbers. Even Louisiana’s state bird, the brown pelican, was seen floating on the water with no way to fly since its wings were saturated with the thick brown oil, an image not soon forgotten by Louisianans.

In the end, BP spent more than $65 billion on cleanup costs and penalties. One can’t help but wonder why oil drilling in the Gulf is still allowed after such a disaster. According to Williams, the petroleum industry is not to blame; the lack of safety culture is.

“My first thought after hearing about the [Deepwater Horizon] rig explosion was where were the human failures,” Williams said. “It’s always multiple human failures that create these kinds of disasters. Deepwater was days of ignoring telltale signs that what you’re doing is wrong. It was years of culture that built up into causing that.”

Not that worker safety was never a priority for oil and gas companies, but it was more about keeping with the status quo, Williams said. Whatever worked in the past can work now. He compares it to when wearing a seat belt became the law, explaining that it was easier for younger generations to follow the new law than for older generations who hadn’t had to wear a seat belt for most of their lives.

“I teach seniors at LSU and that’s a huge piece of what I’m instilling—you guys are the ones that will drive change in safety and environment,” Williams said. “You may think you’re powerless because you’re not an executive, but you’re not. If you say this is how things are done, eventually you’ll move up and be the one to make those decisions. You’ll have the right toolset and mindset. If you work hard and have a sharp toolset, which LSU Engineering will give you, then you’ll understand the limitations. You can defend your arguments. That’s the ethics of practicing engineering. You will run into ethical dilemmas that you must stand up against.”

Williams says that many of his students have an existential crisis because they see oil and gas industries as the bad guy and here they are studying petroleum engineering.

“I’ve met a lot of people who are passionate about the environment,” he said. “They think all they can do is stand on the outside and point fingers at what they think is the cause. If you want to make an impact in the oil and gas industry, get in it.”

Since the 2010 oil spill, Williams says companies such as Shell, Exxon and Chevron have stepped up in a big way to improve safety.

“They have really started embracing the safety culture and understand it must take place at all levels,” he said. “When I visited Exxon headquarters in Houston, their safety culture is front and center, in your face.”

He added that these companies are also sharing their missteps so that others don’t make the same mistakes and are holding people who work for them more accountable by ensuring they have the same safety programs instilled in their organizations.

Williams himself is contributing to the current safety culture in the oil and gas industry by researching the precursor issue that caused the actual blowout on the Macondo Prospect. He and a team of LSU PETE faculty received a $5 million grant from the Gulf Research Program, which was funneled through the National Academies and focuses on the research side of community and environmental impact and offshore energy safety.

When asked what the biggest unknown is that could lead to the next disaster, Williams said, “Hands down is the human factor and gas in the riser. If you get gas in that pipe that connects the drilling platform to the ocean floor, that gas will come out as an uncontrollable fire that will burn your platform.

“Currently, at any given moment, you can get gas in your riser,” he said. “If you can identify it soon enough, you can prevent it from becoming a disaster. That is what our research project is on—creating methods, models and instruments that can detect this stuff much quicker, so you would have much more time to react.”

As part of the grant, Williams and the team were able to remodel the infrastructure in the LSU PERTT Lab to do initial proof-of-concept for their detection methods. They are attempting to run more tests before releasing the final report next spring.

“We’ve got another decade’s worth of research we could do focused on this technology,” he said.

Though drilling in the Gulf has slowed due to its expense and a market that doesn’t demand oil and gas right now, fracking has picked up speed.

According to Williams, it’s less costly but no less dangerous. In 2018, a land rig in Oklahoma exploded, killing five men. It was deemed the deadliest U.S. oil rig explosion since Deepwater Horizon, yet there was very little change to safety regulations.

“It’s a slow process of cultural change that must happen,” Williams said. “I tell students you have got to put in the work to voice your opinions and put value in them. You can create change.”