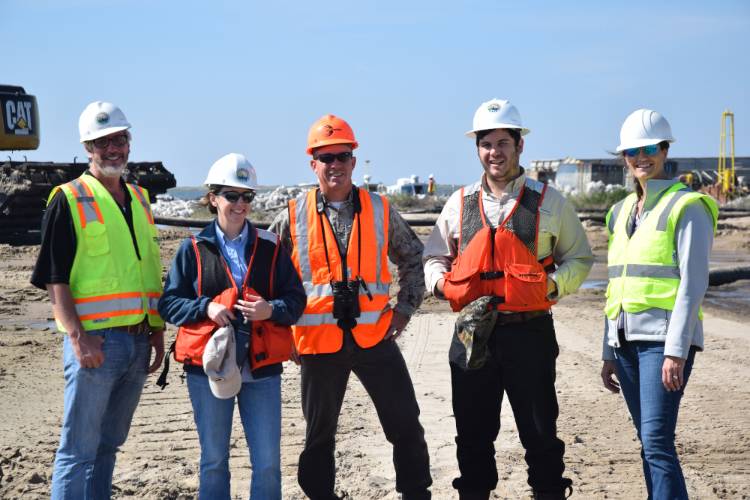 BATON ROUGE, LA – It’s been 51 years since the brown pelican was reintroduced to Louisiana after the species completely disappeared from the state due to pesticide use in the 1960s. Since then, it has thrived on Queen Bess Island, making it the third largest brown pelican rookery in Louisiana. Another battle looms, however.

Over the years, Queen Bess Island has sunk and eroded into the Gulf of Mexico, leaving less than five acres of suitable land for the pelicans to nest. Racing against the clock, engineers like LSU Biological Engineering alumna Amanda Phillips are working to restore the island’s nesting area to its once-vast size, giving the state bird another chance to prosper.

“This project is different than others,” said Phillips, a coastal engineer for Fenstermaker in New Orleans. “In many respects, a lot of the projects that have been constructed over the years have been general sense-type projects. A marsh project will restore habitat but it’s really just filling in the holes that have developed over the years. But with this project, you had something to identify with—pelican and tern habitat. It’s tangible.”

Queen Bess Island, a patch of land about two miles north of Grand Isle in Barataria Bay, is the site for 15%-20% of the state’s brown pelican nesting activity. The island is also home to 60 other bird species, such as egrets, herons, terns, gulls, roseate spoonbills, ibis, and others. During breeding season, a few thousand pelicans crowd onto five acres of land surrounded by rock barriers that were installed in the 1990s. The goal of the restoration project, which Phillips has been working on since 2017, is to provide a quality habitat for these birds to nest.

Working alongside the Louisiana Department of Wildlife and Fisheries, Coastal Protection and Restoration Authority, and the U.S. Departments of Fish and Wildlife Services, Phillips designed the best way to restore the island in a small amount of time.

The Queen Bess Island project is one of the fastest moving restoration projects the state has seen. There is only a window of six months to complete the project during the non-nesting season in order for the birds to be able to lay eggs in the spring. Mother Nature doesn’t wait and neither do these researchers and engineers.

“One of the nuisances of this project is they did not want any construction occurring when the birds show up to nest,” Phillips said. “Pelicans tend to nest where they were born. There could be large ramifications if their nesting were affected. Wildlife and Fisheries really wanted the construction to happen after nesting season, which is after Sept. 15 and before nesting season starts on March 15.”

As soon as the project was approved in March 2019, a contract was awarded by June and on Aug. 1, the contractor was able to take plant samples and start growing them in a greenhouse to later replant on Queen Bess Island.

“It ended up going very smoothly and worked out well, which is a testament to all the people involved and knowing this project was so critical,” Phillips said. “When Wildlife and Fisheries gave the go-ahead to get out there as soon as the birds left, they were out there slinging sand as soon as possible.”

Now in its final stages, the Queen Bess Island project will provide 30 acres of restored brown pelican and wading bird habitat, along with seven acres of nesting tern and black skimmer habitat. In order to increase the island to 37 acres, sediment had to be dredged from the Mississippi River near Belle Chase and then barged to the site. The sand was then poured to help elevate the island. Contractors sloped the island from the highest elevation at the southwest end and the lowest at the northeast end.

The project will make marsh habitat accessible for fish and protect it with a breakwater to reduce wave and tidal erosion. A row of breakwaters on the south side of the island will also give young birds a safe, calm area for swimming with easy access to the water. Limestone will cover about one-third of the island to provide habitat for other bird species looking for beachfront property.

“It’s not a very large island but it is isolated, so there aren’t any predators on it,” Phillips said. “It’s very safe and that’s what makes it special. Having scientists in the room who have studied, lived and breathed these birds and what they eat gave me and our team feedback that led to constructive solutions.”

With the exception of the habitat for terns and skimmers that prefer barren ground, most areas of the island will be planted with native vegetation like marsh elder, matrimony vine, and black mangroves, which pelicans prefer to nest in. The restoration is expected to last at least 20 years, with money set aside for necessary upgrades.

The $18.7 million project comes nearly 10 years after the Deepwater Horizon oil spill in the Gulf of Mexico and is part of the billion-dollar settlement from British Petroleum. It’s also part of the Natural Resource Damage Assessment.

“There are three big pots of money with three affected states—Louisiana, Texas and Florida—having access to these pots,” Phillips said. “The projects that were proposed by each state are being funded by these imposed fines on BP.”

The construction part of the restoration project was $10 million, the design was $1.5-$2 million and the remaining funding will go toward future maintenance.

When all is said and done, Phillips will have had a hand in saving Louisiana’s state bird.

“We all recognize this to be an ongoing issue and we were able to bring our various skills to the table and develop a project that we are all proud of,” Phillips said. “We’ve painted this big picture and we’re about to see what the birds think of it.”

Not only will the project help the pelicans, but Phillips hopes it will also inspire people in her line of work.

“It makes me beam every time I talk about this project because it has such a potential positive,” she said. “It may help people have a better understanding of what coastal restoration and engineering is all about.”