Engineering Across the Pond 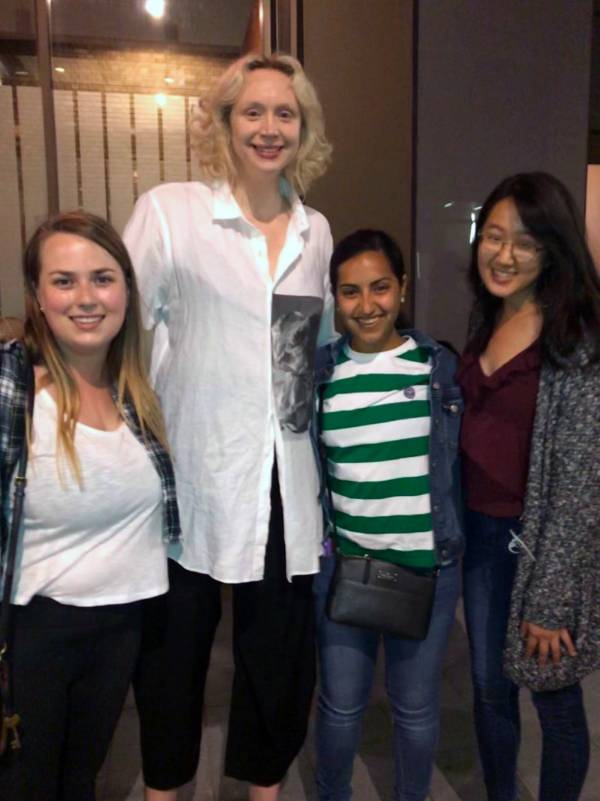 BATON ROUGE, LA – Europe is probably not the first place that comes to mind when talking about flooding and environmental issues, but there are two countries across the pond that share these same problems with Louisiana.

Over the course of six weeks in June and July, Pardue and LSU CEE Professor Clint Willson accompanied 13 LSU Engineering students to Rotterdam and London as part of LSU’s new study abroad program, “Water, Environment and Sustainability.” The program, which offers two three-week courses in each city, is a collaborative effort between LSU and Rice University in Houston, from which five students and one faculty member joined LSU on the trip.

“LSU chose Rice because they work together on lots of things and have a connection with their SSPEED [Severe Storm Prediction, Education, & Evacuation from Disasters] Center,” Pardue said. “We’ve worked with them a lot over the years and have many friends and contacts there. It was nice to have the Rice faculty and students on the trip with us. Houston has some of the same flooding and environmental problems as Louisiana, so there’s a lot of synergy there.”

Rice University CEE Professor Philip Bedient taught the first course, Hydrology & Disaster Management, in Rotterdam. The students began it by touring Ouwekerk Watersnood Museum, where they learned about the 1953 North Sea Flood that struck the Netherlands, killing nearly 2,000 people. They also learned about Delta Works, an extensive system of dams and storm surge barriers created in response to this catastrophic flood, and visited Het Keringhuis Public Water Center and Maeslantkerig, a storm surge barrier with movable parts larger than any other barrier in the world.

The students took many field trips, learning about Nijmedgen and its “Room for the River” project; Zandmotor (Sand Motor), a man-made sand peninsula for coastal management; the “Dike-in-Dune” project in Katwijk, a new coastal maintenance strategy designed to harness the power of winds, waves, and currents to help protect the Dutch coast; the Eastern Scheldt Storm Surge Barrier; Neeltje Jans, a nature reserve and Delta Works information center that was once a working island during the construction of the barrier; the Rhine River Delta; Afsluitdijk, a major dam and causeway constructed in 1933; and the Waddenzee (Wadden Sea) salt marshes.

“The Rotterdam course was very heavy in fluid dynamics, but I’m sure it will become relevant to my work in some way,” said LSU Chemical Engineering senior Gloria Alvarado of Baton Rouge. “The class had similar concepts with ChE, just with a different application. I really enjoyed seeing the comparisons and applying the same things I was learning. It was awesome to get to explore the Netherlands from a flood protection standpoint.” 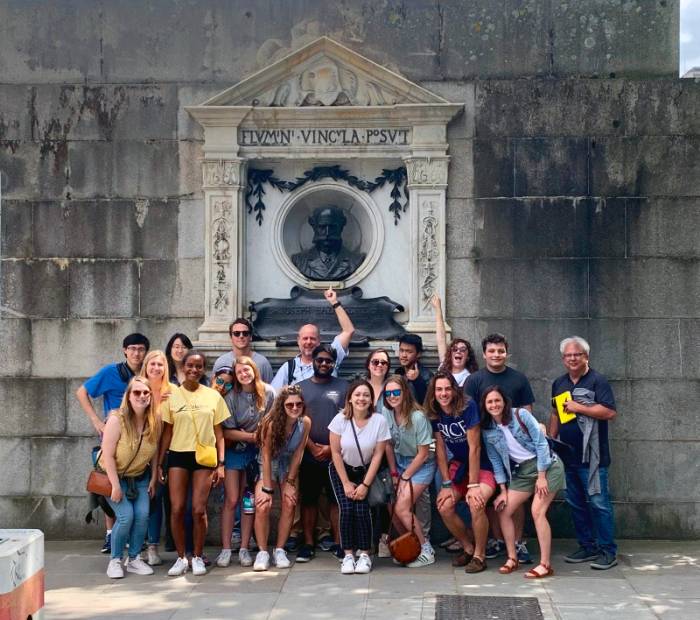 “This is absolutely everything that I want to do,” said LSU Environmental Engineering junior Gabrielle Langlois of New Orleans, who also does water quality research for the LSU CEE department. “I got to study all of these amazing defense systems for flood control. I’m from New Orleans, so to see how well controlled it is in the Netherlands, it really inspired me and I want to bring it back here.”

The Rotterdam trip wasn’t all work, no play. The students also had a chance to explore the area on their own. During their first weekend, Alvarado and her classmates went to Brussels to eat chocolate and French fries (which originated in Belgium). They traveled to Amsterdam the next weekend to visit a few museums and then spent the last weekend in Rotterdam.

After checking out of The Student Hotel Rotterdam, the 18 LSU and Rice students boarded a ferry to England, where they took a train from Harwich to Imperial College in London. It’s here that Pardue taught his course, Urban Infrastructure, Environment and Sustainability, which was broken down into five projects.

“I like the way the London class was structured,” Alvarado said. “The first week, we learned about problems London was having in the Victorian age and how they were solved. The second week, we were introduced to problems of today, and the last week, we combatted those problems with innovation mechanisms and practices. I thought the idea of the class as a whole was really awesome.”

The students began their first project by visiting the top of the Shard, Europe’s tallest building, where they could get a bird’s-eye view of the River Thames. They also learned about the Thames Tideway project in London, which will divert combined sewer overflows from a Victorian system.

“The project is one of the largest ongoing urban infrastructures in the world,” Pardue said.

The group then visited the Canary Wharf/Isle of Dogs at the Museum of London-Docklands for the Secret River exhibit, followed by a boat ride to the Thames Barrier, one of the world’s largest movable flood protection devices. They also checked out the Crossness Pumping Station, one of 19th-century English civil engineer Joseph Bazalgette’s Cathedrals of Sewage, an ornate structure that was the southern terminus of Bazalgette’s famous system. 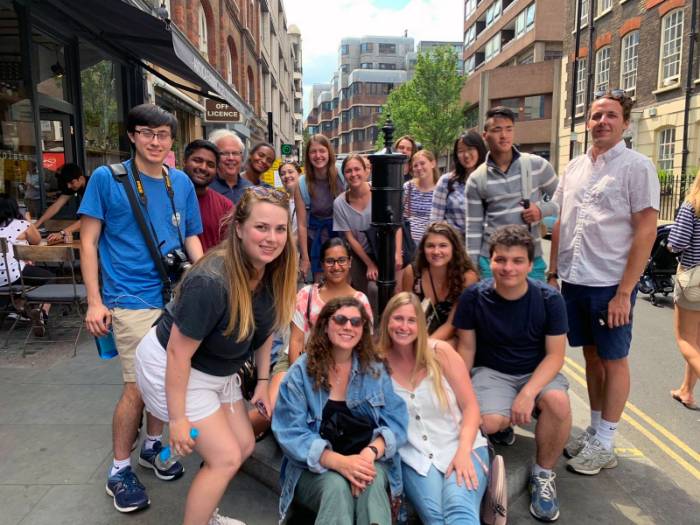 Pardue’s second project examined London’s air quality problems and their relation to the transport sector. Students used their own portable air sensors to take measurements on commuter routes to determine tradeoffs in low carbon public transport and air quality. They also studied learned methods of computing carbon emissions and the connection between primary and secondary pollutants.

The third project entailed studying London’s cholera outbreak and other events mentioned in Steven Johnson’s book, “The Ghost Map.” This segment included field trips to historical sites, such the headquarters of the Institution of Civil Engineers to view the new water exhibit, Broad Street, and the John Snow Pub. They also checked out the Water and Steam Museum, where they witnessed a steam engine demonstration.

Pardue’s fourth project investigated the role innovation plays in driving changes toward a more sustainable set of urban systems. Students examined sites in greater London that were evidence of this, such as the laboratory of Dr. Michael Faraday and the Royal Observatory in Greenwich, the latter of which is the site of the Prime Meridian and origin of Greenwich Mean Time.

The fifth and final project focused on sustainable building design and included a trip to BRE Innovation Park in Watford, where students mainly worked on several software tools in the classroom.

Of course, there was also time for the students to enjoy themselves, allowing Alvarado to fulfill a childhood dream.

“Outside of class, my favorite thing was going to Wimbledon,” she said. “I grew up playing tennis and watching tennis with my parents and friends, so it was really cool. Class was structured in such a way that we would have exams on Fridays, so we essentially had three-day weekends when we could explore.”

Langlois said that seeing the different cultures and ways of life was the best part of the trip.

“It was really cool to see cultures push global sustainability,” she said. “It was an amazing experience.”

Pardue plans on offering this study abroad program to LSU Engineering students next year, with hopes to once again partner with Rice University.

“The students worked great together,” he said. “We would love to have 10 students from both universities next year, and I will go back each year. We put a lot of work into this program.”

Bedient agreed that his students also had a pleasant experience working with LSU.

“The Rice and LSU interactions were amazing in both Rotterdam and London,” Bedient said. “The students got along very well and it was a very enriching experience.”