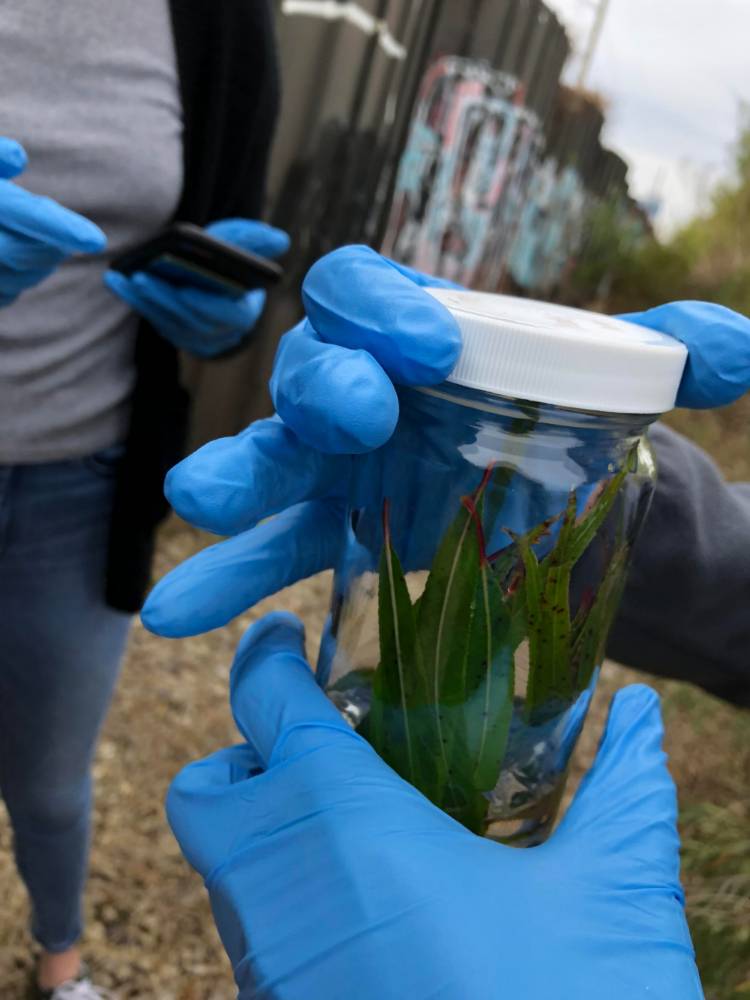 BATON ROUGE, LA – As the saying goes, it takes one bad apple to spoil the barrel, which is exactly how residents in New Orleans’ Lower Ninth Ward feel about blighted property in their neighborhood.

Pardue, who has overseen dozens of CEE senior capstone projects over the years, said it was time to focus on helping those in his own backyard, so to speak.

“I was feeling guilty because thousands of man-hours have gone into solving problems for other people,” he said. “So, I said, let’s focus on New Orleans and try to do some things there. This time, we’re really engaging with the community.”

This is Pardue’s second year working on blighted projects in New Orleans, but it’s the first time his team is working with a community organization. In this case, it’s A Community Voice, a nonprofit organization led by Executive Director Beth Butler that is “comprised of working, poor, elderly, women, children, and families who provide a voice to its members regarding everyday issues that affect their lives.” Pardue’s team was matched with ACV through Flood Forum USA, a nationwide organization of community groups and 60,000 scientists that are concerned about flooding.

One issue ACV wants to solve is the blighted property in the Lower Ninth Ward, an eyesore that has existed, in some cases, as far back as Hurricane Katrina.

“There is blight across New Orleans from people not being able to return home after Katrina,” Pardue said.

Some lots are empty with unkempt grass, while others have dilapidated homes containing rodents. In order to find lots to work on, Pardue and ACV must first find the lot owners, which is proving to be no small task.

“Finding the owners is the tough part,” Pardue said. “Sometimes the city has taken over the lot, or the school board owns the property. Some of the lots are privately owned, with the residents intending to move back, or we just can’t find the owners at all. We’re having to look at a tax website to find them and get permission to work on their lot.”

For the lots available, Pardue says the owners are happy to offer their property for the B2B project.

The first thing the students do, once given a lot to work on, is design a bioswale, which is a trench filled with porous material and vegetation that is designed to remove debris and pollution from surface runoff.

“The problem in Louisiana is that we don’t have the right soils for doing bioswales,” Pardue said. “We have clay. So, we dig out a pit, then fill it up with oyster shells, pecan shells, and other recyclables [leaving room for the water to sit]. If you order them in the right way like a parfait, you actually get good treatment.”

The bioswales can hold rainwater for days, which allows time for the pollutants to leave and the cleaner water to then run into the canals and Lake Pontchartrain.

“We will try to do a bioswale that would be three to four lots that aren’t necessarily connected,” Pardue said. “We can run pipes underground.”

Another element of the project is adding native plants that will maximize the removal of air pollutants through their waxy outer “cuticle” layer, which absorbs pollutants and improves air quality.

“One of the things we’re adding to this is some plants on the surface that would be low maintenance,” Pardue said. “My lab is working on what kind of air plants absorb the best in New Orleans, so the students know which plants to use and how many to plant in order to improve the air quality. If we build on an empty lot and have some of this vegetation, the idea would be that if people wanted to walk around for exercise, the air quality would be a little better.”

Moss said the team took leaves from different trees in the Lower Ninth Ward to test the concentration of pollutants in order to decide which vegetation to plant and how much.

“We want to increase the vegetation to decrease the pollutants,” she said.

The B2B project not only teaches students like Lam about plant varieties and how to design a bioswale, but also how to work with people and get the ball rolling.

“We originally chose this project because of the community component of it,” she said. “You need to know what the community wants. You don’t want to be that engineer who throws down a design without talking to the community to see if this is what they really want.”

“One of the things the students have had experience with now is seeing that if you want to do this, you have to get buy-in from locals and knock on their doors,” Pardue said. “Beth is very driven. The students are blown away by her.”

“Miss Beth is a firecracker," Midkiff said. "She’s awesome. We’re getting right in there, talking with residents and seeing how we can help. It’s a good molding experience before we graduate and go out on our own.”

At the start of the project, the team of six sat in a meeting with a New Orleans councilwoman who presented them with a map showing all of the blighted lots in the Lower Ninth Ward designated by white pushpins. There were 2,000.

“You had to take a minute to wrap your head around it,” Midkiff said. “That’s a big number.”

Though the project may not be completed until another team takes it over in the fall, Lam, Midkiff, Moss, and the rest of the team will present their work at the Waste Management Education Research Consortium (WERC) Design Contest at New Mexico State University in early April.

“It’s going to be interesting for us to go into an area where flooding isn’t an issue,” Lam said. “It will also be hard for [the judges] to comprehend that the Lower Ninth Ward still hasn’t been rebuilt after all this time.”

Whether their team wins or not, the work the team is doing is sure to garner accolades from the Lower Ninth Ward residents.