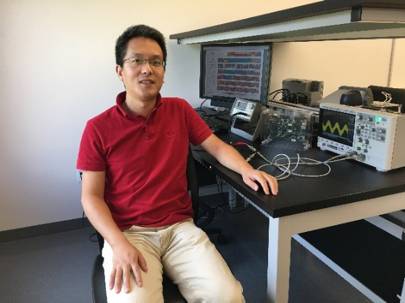 Born and raised in the Jiangsu Province of China, Zhou became interested in engineering at a young age.

“I was interested in radios and phones,” he said. “From making a crystal radio receiver to building electronics on circuit boards before attending college, I eventually started my major in telecommunications.”

Prior to joining the College of Engineering’s faculty, Zhou was an ECE assistant professor at Southern Illinois University in Carbondale for two years. He was also a senior systems engineer with Marvell Semiconductor in Santa Clara, Calif., from 2011 to 2013.

In 2014, Zhou received the ECE Outstanding Teacher of the Year award at Southern Illinois and was also a recipient of the Best Paper Award at the 2014 International Conference on Wireless Communications and Signal Processing.

He is currently a senior member of the Institute of Electrical and Electronics Engineers and has served as an editor for IEEE Transactions on Wireless Communications since 2013.

Thanks to a multi-year grant funded by the National Science Foundation, Zhou’s current research at LSU entails developing a techno-economic model to incorporate spectrum sharing geographic information, including licensed areas of primary users and locations of secondary users, and user characteristics involving the supply and demand relationship.

The findings in his research can be applied to problems of allocating other resources, such as commonly owned water sources or agricultural areas to maximize social welfare.

In his spare time, Zhou enjoys outdoor activities and sightseeing with his wife and 3-year-old daughter. Along with his research and teaching, Zhou loves LSU’s beautiful campus and LSU Football.