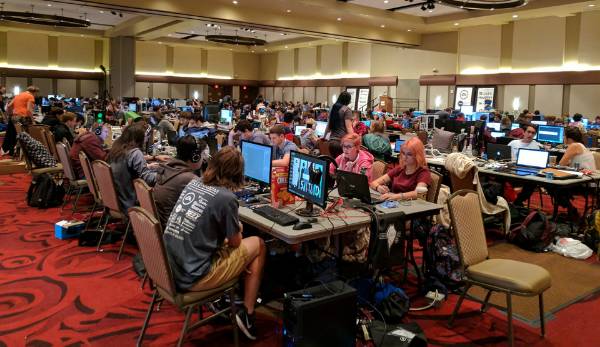 BATON ROUGE, LA – A group of 14 LSU students, some for the first time, recently attended the fourth annual Chillenium Game Jam at Texas A&M University where they were tasked with planning, designing, and building a video game from scratch in 48 hours.

The event, hosted and created by the Department of Visualization at Texas A&M, is the largest of its kind, with students from the United States and Canada attending. Participants can compete alone or in teams of up to four people and create games based on a given theme.

“The majority of participants (61 percent) are enrolled in an engineering field,” Aubanel said. “LSU had five teams, a blend of LSU and other universities…for four of the teams, this was their very first game jam. [This type of event] is a huge benefit to students, as it introduces them to teamwork and hectic deadlines. This is as close as you can get to what it takes to get a game from concept to completion.”

“The event exposed attendants to their peers and to visiting industry professionals,” Trouard added. “Besides the experience, the students are padding their portfolios…[they] also bond with each other.”

Students agreed with Aubanel and Trouard, saying how much they enjoyed and learned from the experience.

“[We] created a local two-player game of tag where each player tries to run down their counter,” said Mohamed Jabbar, a senior computer science major from Gretna, La., who was on a four-person team called Team LSU2. “The tagger is a caterpillar and the person being tagged is a butterfly. Roles switch when tagged and the counter only goes down as a butterfly.”

One of Jabbar’s teammates, Luke Runyon, a freshman in computer science from Lake Charles, La., said that he felt his inexperience was a slight disadvantage but nevertheless enjoyed the experience and learned a tremendous amount about what it takes to design a video game.

“My favorite part was that feeling of relief when the game was finally working,” Runyon said. “It was so satisfying that the work we did really meant something. I was really proud of it.”

“I was on a team with two Texas A&M students and one LSU student. We made a platform action game where two plants or players fought to get a bucket of water and bring it back to their base,” said Brian Gates, a sophomore in computer science from Prairieville, La.

Both the LSU students and faculty hope to return to the Chillenium event in the future.

“We are hoping to turn this into an annual field trip to get LSU’s best and brightest to compete and participate in the community of game development that is active throughout the southern states,” Aubanel said. “I am always very impressed by how dedicated everyone is to create a finished game that they can be proud of. This is especially impressive when most of your students have no prior experience with any of the game development software. Not only are they competing in a game challenge, but they are required to learn a very large development environment in record time.”

Check out the following four games by LSU students— “Cardinal,” “Hope in the Dark,” “MeTAGmorphosis,” and “PlantsFormation.”