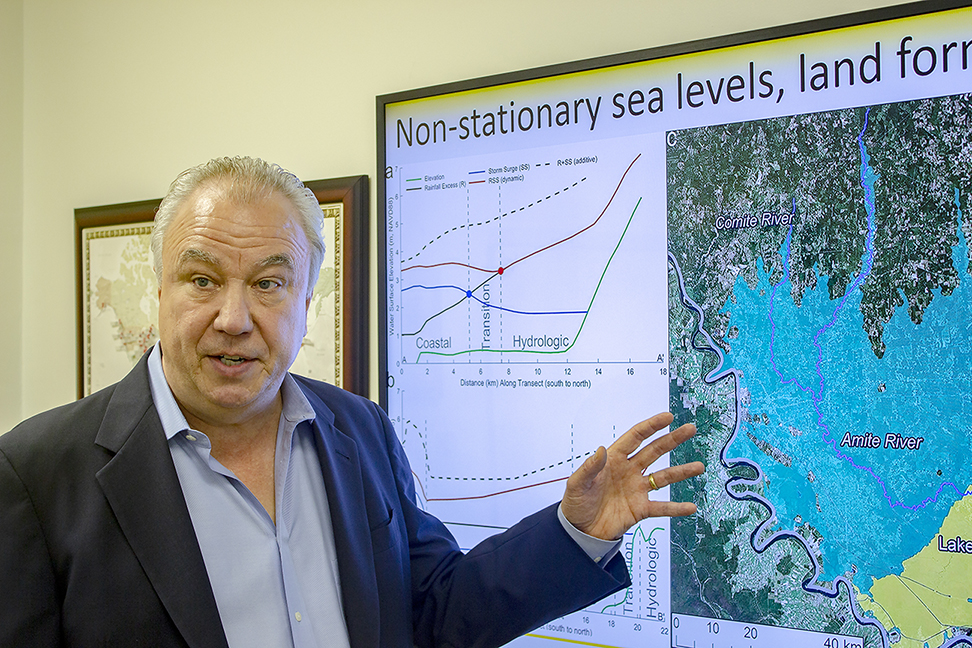 BATON ROUGE – Living in Louisiana has its perks, but with the good comes the bad—flooding and hurricanes. Though there is no stopping Mother Nature, LSU Civil and Environmental Engineering Professor and Louisiana Sea Grant Laborde Chair Scott Hagen is devoted to studying and understanding the impact rainfall runoff and hurricanes have on the cities along the state’s delicate coastline.

Most everyone who lived in southeast Louisiana in August 2016 remembers the three straight days of rain, leading to “The Great Flood of 2016.” Parts of East Baton Rouge Parish received more than 25 inches of rain, leaving thousands of homes and businesses underwater. What Hagen and other state officials want to know is what would happen if that floodwater were to merge with storm surge from a hurricane in an area known as the transition zone.

“It’s really critical for us to be able to define this transition zone,” said Hagen, who is also the director of LSU’s Center for Coastal Resiliency (CCR) and holds a joint appointment in the Center for Computation & Technology. “It’s a very complicated physical process where you have rainfall that ponds on the land’s surface, and it’s running off of the land’s surface and interacting with the hurricane storm surge. That’s a really grand challenge that we have in the area of numerical modeling, to be able to describe the processes.”

After the 2016 flood, this scenario was a possibility with Tropical Storm Hermine looming in the Gulf of Mexico. Though Hermine changed course, hitting Florida instead, the impact it would have had on Louisiana is unfathomable.

“There was a real threat there,” Hagen said. “The Coastal Protection and Restoration Authority contacted LSU right after the ‘Great Flood’ and asked us to look into this. We had already been thinking about that and wrote a proposal to the National Science Foundation under its RAPID Response Program, and it provided us with funding. So, we began preliminary research that we published in the Journal of Geophysical Research Letters. It provided us with a basis by which we were able to write a RESTORE Act Center of Excellence grant proposal, which was also chosen for funding.”

The NSF project titled “RAPID Flood Extent/Depth Data Identification, Acquisition, Cataloguing, and Processing” began an exploration of the transition zone. The research so far has produced an optimistic outlook if this scenario were to take place.

“It’s in that feathered zone that’s really interesting,” Hagen said, pointing to a large yellow area designated as the “transition” zone on a flood map. “When we do the simulations, we show the cumulative effect is actually less than if you consider each one separately and then combine them, because of their interaction and the way the water flows. And that’s a good thing.”

With the RESTORE Act project, titled “Coupling Hydrologic, Tide and Surge Processes to Enhance Flood Risk Assessments for the Louisiana Coastal Master Plan,” Hagen and his colleagues from ARCADIS and the University of North Florida are expanding on the flood transition assessments and want to look at return period rainfall events and multiple hurricanes in order to determine the probabilistic flood zone.

“This will help us define the 100-year transition zone instead of just a single event,” he said.

Another factor to consider when predicting the impact of a concurrent storm and flood on the state is the issue of coastal erosion. Each hour, Louisiana currently loses the land equivalent of a football field.

Hagen added it’s difficult to say whether a flood or storm is a 500-year or 1,000-year event due to the non-stationary climate.

“Historically, what we would be able to do is look at the last hundred years of the weather record and that would give us the trends of what we can expect in the future,” he said. “But when those trends are shifting because of climate change, then it becomes much more complex to assess our return area rainfall events. It could be considered a 1,000-year event based on the past, but it’s not necessarily a 1,000-year event when we consider what’s going to happen in the future.”

Another NSF project Hagen and one of his PhD students, Chris Siverd, are working on entails developing the capability to compare storm surge in 1850 versus 1890, versus 1930, and so on.

“It’s a really nice way to assess how the changing coast impacts something that is important to all of us—storm surge,” he said.

Over the past 10 years, Hagen’s research has been heavily focused on climate change and sea level rise, quite a departure from the corn fields he grew up around in the Midwest. A graduate of the University of Iowa and the University of Notre Dame, where he received his PhD in Civil Engineering, Hagen has done an “enormous” amount of work with the National Oceanic and Atmospheric Administration (NOAA) in assessing the impact of sea level rise in the northern Gulf of Mexico, including Mississippi, Alabama, and the Florida panhandle.

“We’re now bringing that experience to coastal Louisiana,” he said.

Since his arrival at LSU in 2015, Hagen has secured more than $3.5 million in grants for his research projects. LSU CCR most recently received a $130,000 grant from CPRA for the project “Annual Implementation and Maintenance of ASGS/CERA (ADCIRC) Surge Guidance System/Coastal Emergency Risks Assessment.” He currently has no fewer than seven research projects on the table, one of which is more than $1 million.

Alongside his research, Hagen teaches the graduate course “Tides, Surges, and Relative Sea Level Rise” and flies across the country and overseas to share his vast knowledge on the topic. His next stop will be the University of Caen in Normandy, France, where he will be a keynote speaker at the International Conference on Estuaries and Coasts.

As for his work in Louisiana, Hagen foresees his studies being highlighted in LSU’s Center for River Studies, which is run by LSU CEE Professor Clint Willson, whom he communicates with on a “regular basis.”

“What you can imagine is the work that we do, in time, is likely to be visualized on the river model [at CRS],” Hagen said. “The hurricane storm surge that we simulate can be animated and projected on there. That would enable this research to be shared with a full range of Louisiana stakeholders, from K-12 to practitioners to legislative leaders, which is what LSU is all about.”

As for the future of the Louisiana coastline and the impact it has on the state, Hagen is refreshingly optimistic.

“Over our history of living along the Louisiana coast, we have benefited in so many ways by the Mississippi River, delta, and associated natural systems of wetlands and coastal forests,” he said. “While we have done much to modify the system with built infrastructure, and will continue to do so, there is still time to retain and enhance the natural systems.”