Lead Engineer at NASA, Renee Horton, Credits LSU for Giving Her the “Edge to Compete” 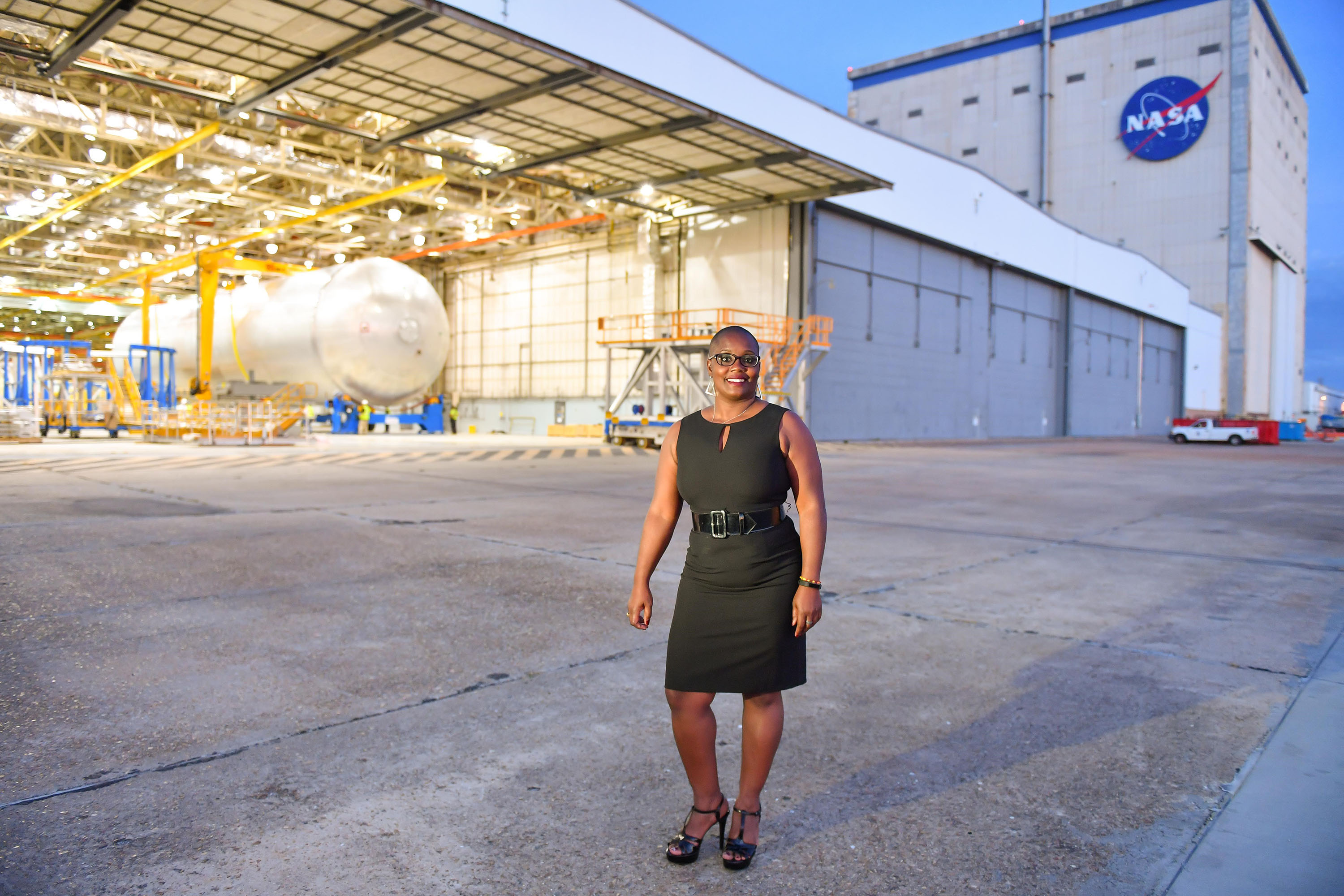 Renee Horton is the Space Launch System Lead Metallic/Weld Engineer at the NASA Michoud Assembly Facility in New Orleans, La. The Space Launch System (SLS) is a special rocket that will one day take humans into deep space, and allow humans to explore places like Mars. As lead, Horton works with the materials review board to oversee anything metallic on the rocket or dealing with the weld.

But for Horton, it’s less about the individual milestones and more about the historical significance. “Every single day I walk into the factory, I realize I’m putting my footprints in history,” she said. When driving into work each morning she said she can see the facility from the interstate. “Every now and then I have to pinch myself, that’s my job, I’m going there,” she said.

Horton began her career at NASA as a mechanical test engineer in 2012 and was promoted to her current position in 2014. In her short time there, she has been awarded six group achievement awards. She received her undergraduate degree in Electrical Engineering from LSU in 2002 and was the first African American to earn a PhD in Materials Science with a concentration in Physics from the University of Alabama in 2011.

While Horton’s work at NASA is exceptional enough to highlight on its own, it’s not the primary reason for spotlighting her. Behind her career is a story of personal trials, triumph, and determination.

From an early age, Horton dreamed of being an astronaut. When she was 17 years old, she enrolled in LSU’s Air Force ROTC Program. She found out during her initial physical and screening that she had a hearing impairment. She failed the hearing portion of the physical and could not continue.

Her dreams of becoming a pilot, and eventually an astronaut, were dashed. She said, “I remember thinking, ‘I don’t even know what my plan is anymore,’ because that was all I had dreamed about. That was my path.”

Horton dropped out of school and decided to focus on having a family instead. She had two boys, born two years apart. During that time, she struggled with the loss of her hearing and, what seemed like, the loss of her dreams.

With a renewed sense of purpose, Horton decided to go back to school. She visited the Hearing Center at LSU where they performed a specialized hearing test that identified exactly where her hearing loss was. She learned that she could hear at very low and very high frequencies, but could not hear well in the speech range.

This helped clear up so many things that were “wrong” with the previous 10 years when Horton struggled to have conversations with people. She said, “The people at the Hearing Center really changed how I saw myself and what I could do with the proper accommodations.” She added, “The Hearing Center is where it changed my outlook on wanting to be productive in life.”

With a better understanding of her disability, Horton re-enrolled at LSU, this time majoring in Electrical Engineering with a minor in Math, and was able to be successful. “My love for 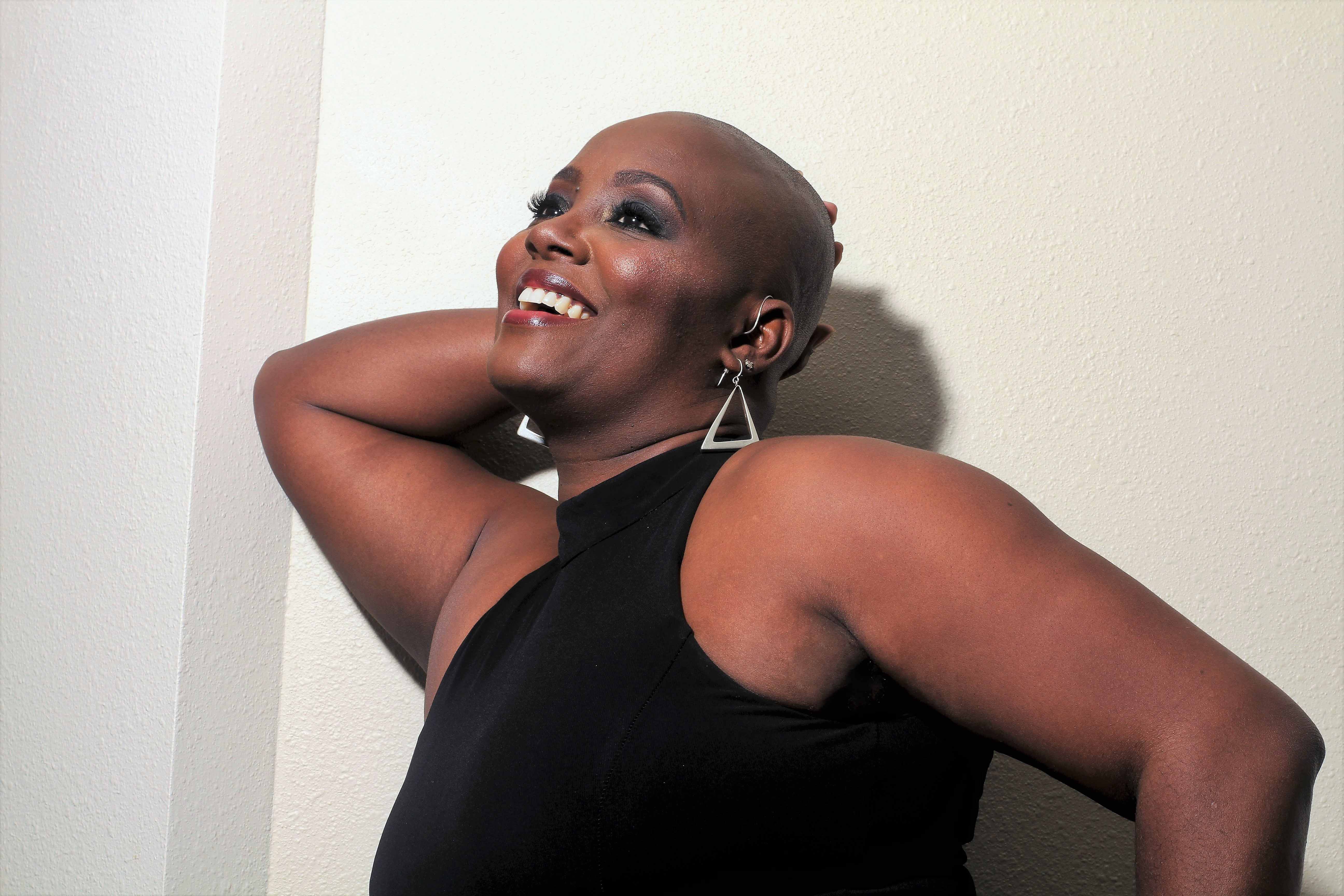 Horton went to school year-round and finished her degree in two years. Besides her hearing impairment, she said her biggest challenge was being a non-traditional student. However, living with her family on campus in the Edward Gay Apartments provided her with a sense of community and belonging.

“I’m very proud of how the University treated me while I was there,” Horton said. “The campus was my safe place. I always felt welcome and included. I always felt a part of the LSU tradition,” she said.

She also became good friends with a classmate who was a big part of her support system, and remains to be a great friend to this day. She and Dean Provost had nearly all the same classes and helped each other through school. Provost said, “For the most part, our skills and personalities complimented each other. If something was a weakness for me, then there was a good chance it was a strength for her, and vice versa.”

Although there were significant generational differences between them, their friendship continued to grow even after school. “Now, we're practically family,” said Provost.

Since graduating and earning her PhD, Horton has spent her free time serving as a motivational speaker, mentor and role model for young adults. Currently she mentors about 10 students from various backgrounds and colleges.

Horton hopes to forge a path for others to follow, because when she was growing up it was hard to find engineers and scientists that looked like her. “It would have been nice to pick up a book and see someone who looked like me, someone that had already done the things that I want to do,” she said.

“The mentoring and the outreach is my way of being able to be a public face to say, 'Hey if you want to do this, you can do this. You don’t have to stand on the sidelines and watch someone else do it,'” she said.

When asked what advice she has for young women interested in STEM, Horton said, “I would tell them that it’s going to be hard.” She added with a laugh, “I’d be a liar if I said it was going to be easy.”

She discussed the challenges of working in a male-dominated field and then concluded, “I truly believe that we [women] have a place in STEM, we have a place in science, and there is nothing wrong with fighting for your place.”

“I believe that when you find the intersection of your talent and your passion, you find happiness. And if your happiness is to be in that place in STEM, then I say go for it,” she added.

Horton said she hopes in 10 years she can look back and see herself as having made a positive impact. She hopes to be the person that future engineers can look to and know that they can do it too, because she helped open the door.

Horton already seems to be making an impact through her mentoring, outreach, and personal relationships. Provost said, “I have a high level of respect and appreciation for her personal drive, perseverance, and overall compassion for people.”

When reflecting on her time at LSU, Horton has much to be proud of. The traditional LSU Ring Ceremony was a particularly proud moment for her. She purchased the ring herself and 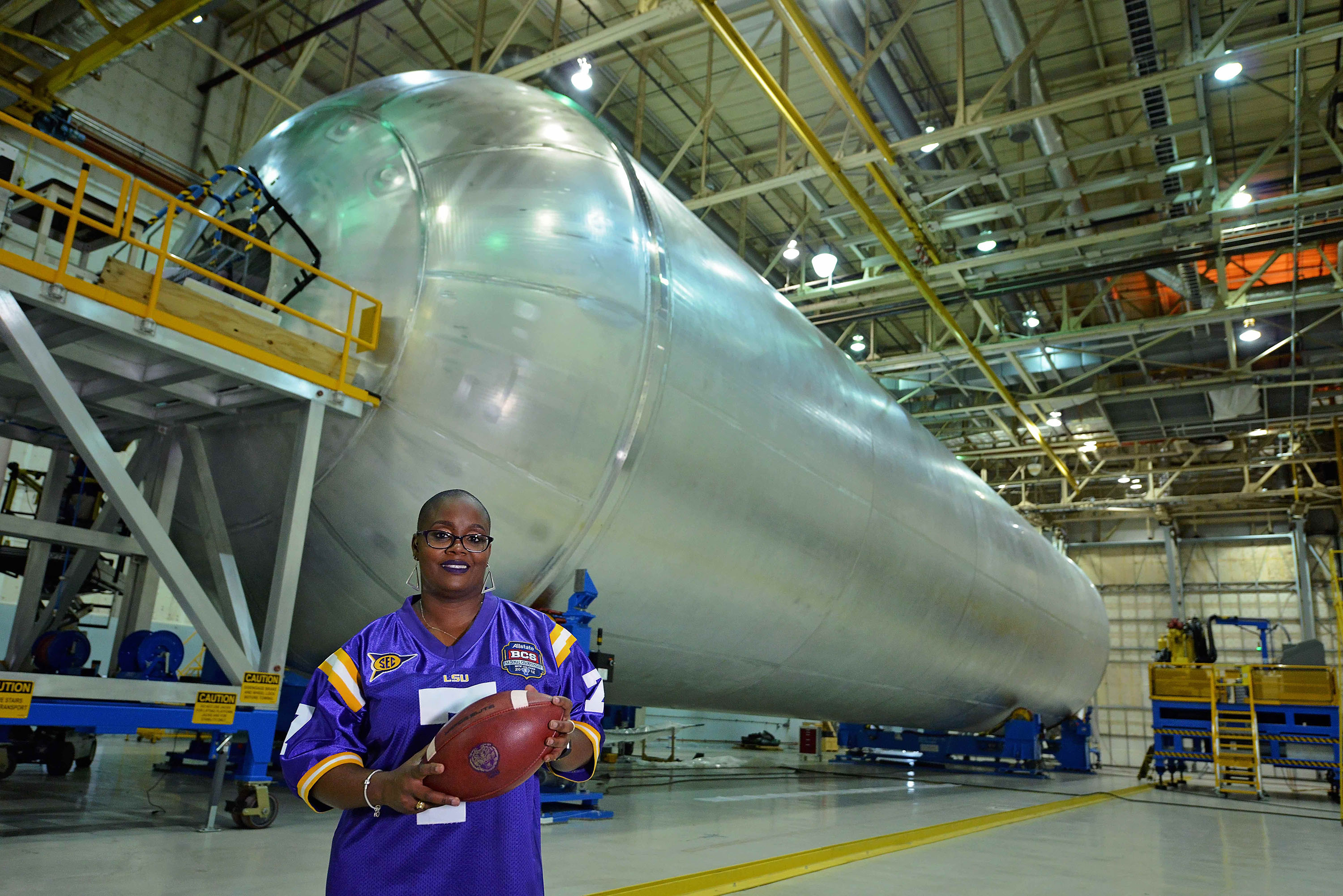 had her children’s initials engraved on the inside of the ring. She felt that is was their degree just as much as it was hers.

“When they give you the ring and you put it on, there was just a moment right then that we had done it,” said Horton. “The four of us had gotten through it and we were going to graduate.”

A few years later when she received her PhD in Materials Science from the University of Alabama, she wore her LSU jersey underneath her doctoral gown at graduation. “Just in case anybody was confused,” about where her loyalties lie, she said.