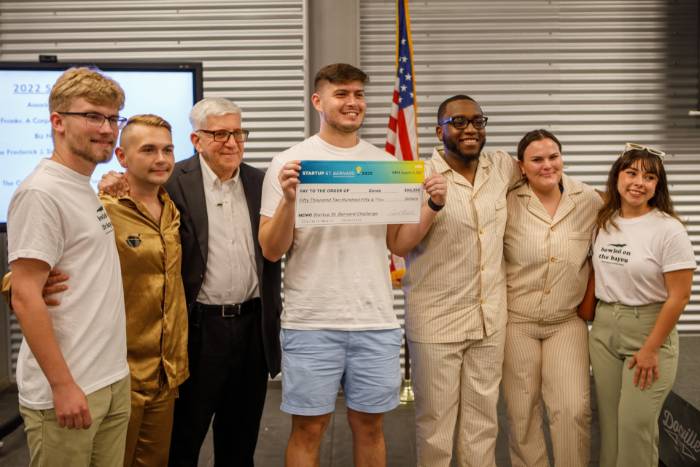 Founded in New Orleans, Ceres was created to provide a sustainable, filling breakfast cereal and everyday snack to individuals who embrace a plant-based lifestyle. Ceres is the first cereal to contain 20g of plant protein and 0g of sugar.

"Winning Startup St. Bernard was monumental," said Morgan. "This is one of our most significant milestones, not only because of the value of the prize but because it will propel us forward as a company. We are positioned to open a micro-distribution center in St. Bernard Parish. We expect to create 6-10 competitive-wage, low-skill jobs through the micro-distribution center, which will fulfill orders from internet customers and local grocery chains."

The company is currently accepting pre-orders through its website, enjoyceres.com. Nationwide distribution through grocery chains is slated for late 2023.

A 2020 graduate with a bachelor's degree in information systems and decision sciences and a minor in entrepreneurship, Morgan was attending law school in California when his best friend and Ceres CEO Richard Simmerman first approached him about the company. Morgan initially agreed to serve as an advisor and planned to "dabble" while attending law school. However, the first taste of the initial iteration of the cinnamon and vanilla cereal led Morgan to pause his law degree and return to Louisiana to take on the role of co-founder and vice president.

Morgan said that he brings a fresh perspective to an industry that does not typically target minority consumers. "I also felt the need to join as a co-founder to change the narrative – plant-based can be for everyone. I want to make this lifestyle and wholesome food more accessible to everyone."

Morgan credits the entrepreneurship minor and co-curricular experiences provided through the Stephenson Department of Entrepreneurship & Information Systems for providing a critical foundation.

"I came to LSU at a pivotal time for the entrepreneurship program," said Morgan. "Entrepreneurship, initially a concentration for the management degree, was becoming a separate degree and transitioning to another department. I got to be part of the evolution. I appreciated how the faculty sought out student feedback and went out of their way to make themselves available to us for questions about the courses or concerns about our companies and ideas."

Earlier this summer, Ceres was awarded the $1,000 grand prize at MicroBREW sponsored by Nexus Louisiana. The team was selected as the most investable company and voted fan favorite by the audience.

About the E. J. Ourso College of Business

Since its establishment in 1928, the E. J. Ourso College of Business has continuously improved and expanded its offerings for students and alumni. Additionally, the college has made it a priority to provide its faculty with the resources it needs to further research in every aspect of the business world and to produce industry leaders for a global work environment. For more news and information about the E. J. Ourso College, visit lsu.edu/business.