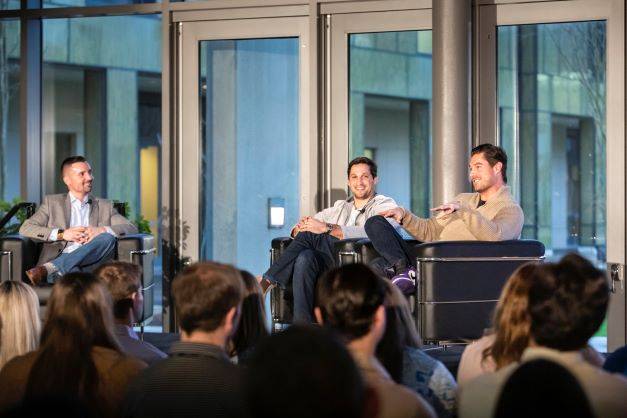 In Conover’s book, he reveals the series of events, both on screen and off, that led to the founding of Sewing Down South, which in its third year, managed to open a brick-and-mortar store and secure huge partnerships with Thomasville and HSN. Conover explains how he was able to turn his passion into his work and reclaim the direction of his life. Most of all, he wants everyone to realize that they too can find the purpose and fulfillment they deserve.

Conover’s book is currently available for pre-sale and will hit shelves on March 29, 2022.

It's important to me to share my experiences with these business-minded students. A lot of times, especially when we are young, we haven't developed enough confidence in our abilities and can easily get distracted from future goals. When I became determined to make Sewing Down South a reality, I knew it was going to be a lot of work, but it was what I've always wanted to do. I want these students, and everyone else that reads my book, to know that they have the full potential to make their dreams a reality at any age.

About Craig Conover
Craig Conover is a fan favorite on Bravo’s hit reality series, “Southern Charm” (2013). Mocked during filming for his enthusiasm for sewing, Craig has turned his previous pastime into a full-time career by co-founding Sewing Down South, a growing southern based “sewing lifestyle brand.” In May 2021, Sewing Down South opened its flagship store onhistoric King Street in Charleston, SC. Craig is a graduate of College of Charleston and Charleston Law School.

About Sewing Down South
Sewing Down South was co-founded by Craig Conoverfrom Bravo's hit reality TV show, “Southern Charm.” Sewing has been a point of inspiration, an outlet for creativity, a method to decompress, and a way to stay true to himself. Craig carefully handpicks the patterns and designs, taking inspiration from Charleston, the coastal city in which the brand was founded. Sewing Down South has a brick-and-mortar store located at 493 King St., Ste. 101 Charleston, SC 29403. For more information, visit www.sewingdownsouth.com or follow @sewingdownsouth on social media.