Coastal wetlands field ecologist Rachel Villani of Baton Rouge, Louisiana will be one of 80 women from across the globe with a background in STEMM (science, technology, engineering, math, and medicine) to sail to the ends of the Earth in 2020 as part of the international program Homeward Bound. 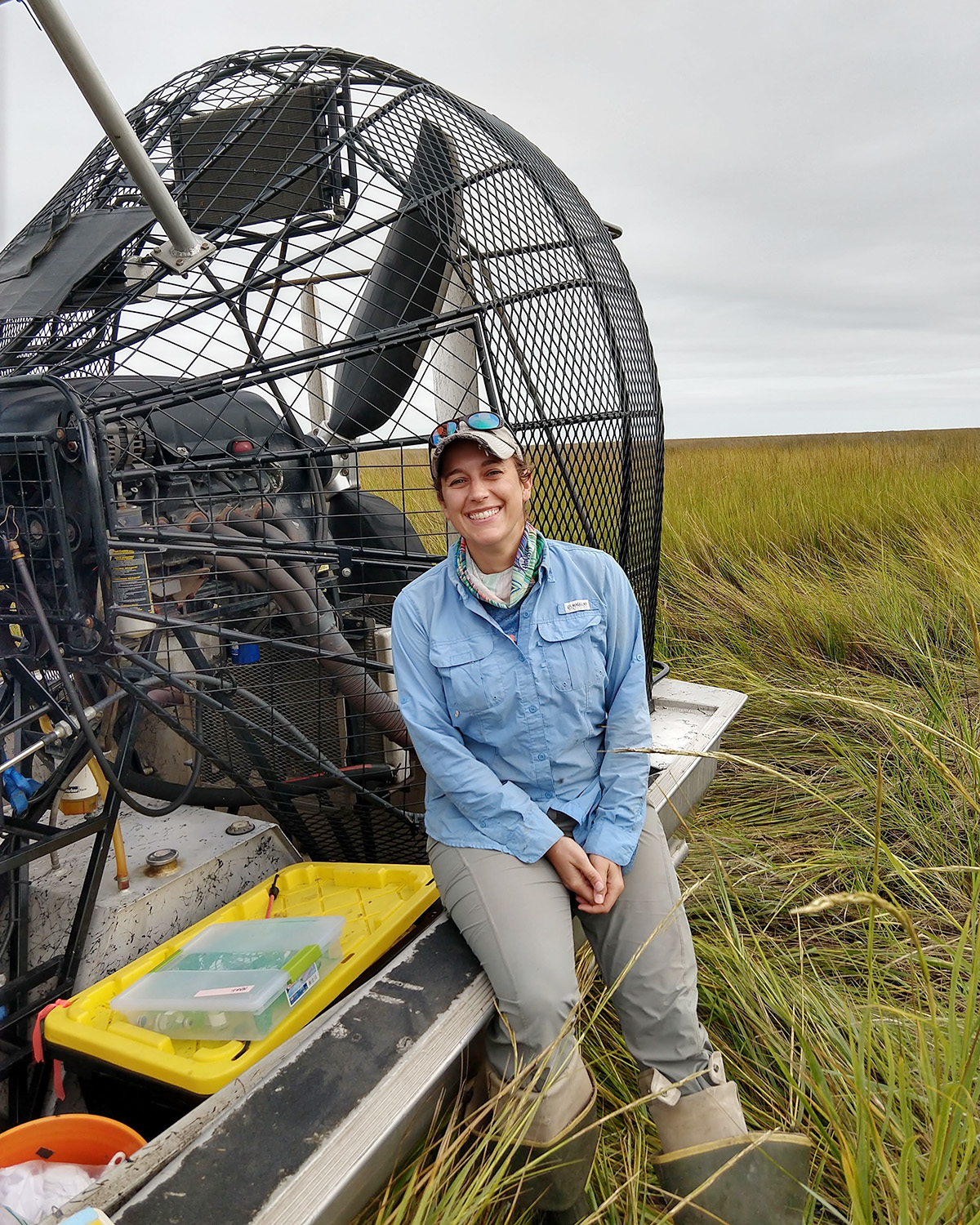 “Women weren’t even allowed to work in Antarctica until 1969, even though there’s been scientists there for over 100 years now,” Villani says. “Antarctica is kind of a frame for the program because it’s a symbol of women breaking barriers and of global collaboration. There’s an Antarctica treaty from 60 years ago that says it’s only for science and not for the military or drilling or anything like that. It’s also a symbol of climate change, as it’s one of the places most affected.”

Villani has never been to Antarctica before. Her trip will be the fifth that Homeward Bound has undertaken and will come as the culmination of a full year of leadership training. The program offers four consecutive tracks; leadership, science, visibility, and strategy. This year’s partipants come from six continents.

“We just started a couple of months ago,” Villani says. “We’re trying to get to know each other in each region. They break us into small groups called triads. I think there are 17 women in the US, and I’m paired with two of them.”

[Homeward Bound] aims to connect women scientists both locally and internationally to enhance their opportunity to take up leadership roles globally.

“I didn’t really know coaching and leadership training was a thing for scientists until recently,” Villani continues. “It’s hard to be visible when you’re introverted and literally in the field all the time. But being visible helps you with whatever you’re doing in life. For me, communicating science is important, even if I’m not comfortable being ‘that person.’ It will be great to learn how to be okay with being uncomfortable since what we’re doing is for the greater good.”

It’s the goal of Homeward Bound to send a total of 1,000 women to Antarctica over a decade. The boat can hold 80 at a time. The program aims to connect women scientists both locally and internationally to enhance their opportunity to take up leadership roles globally, as supporting women in STEMM should “significantly improve their clarity, confidence, shared vision, and strategic capability … and proactively contribute to a sustainable world, both individually and collectively,” writes Homeward Bound.

According to UNESCO, women are more likely to be affected by climate change than men, as they already suffer disproportionally from poverty. Meanwhile, women play a larger role in supporting households and communities to mitigate the effects and adapt to climate change, which means having to come up with innovative solutions. This does not necessarily translate to decision-making positions and jobs at higher levels, however, which is why UNESCO wants to promote women’s participation to help shape the climate change agenda. While women account for 53% of the world’s bachelor’s and master’s graduates in science and 43% of PhDs globally, women make up just 28% of the world’s research scientists.

To protect the birds and Louisiana’s wetlands, Villani would like to take on a leadership role soon.

Villani graduated from LSU twice. She has a Bachelor of Science in Wildlife and Fisheries and a Master of Science in Wildlife Ecology, both from the School of Renewable Natural Resources. For the past 10 years, she’s worked on a project called CRMS, pronounced krims, the Coastwide Reference Monitoring System with 390 permanent monitoring sites across the Louisiana coast.

“If not the largest; it’s one of the largest wetland monitoring projects in the world, and it’s right here in Louisiana,” she says. 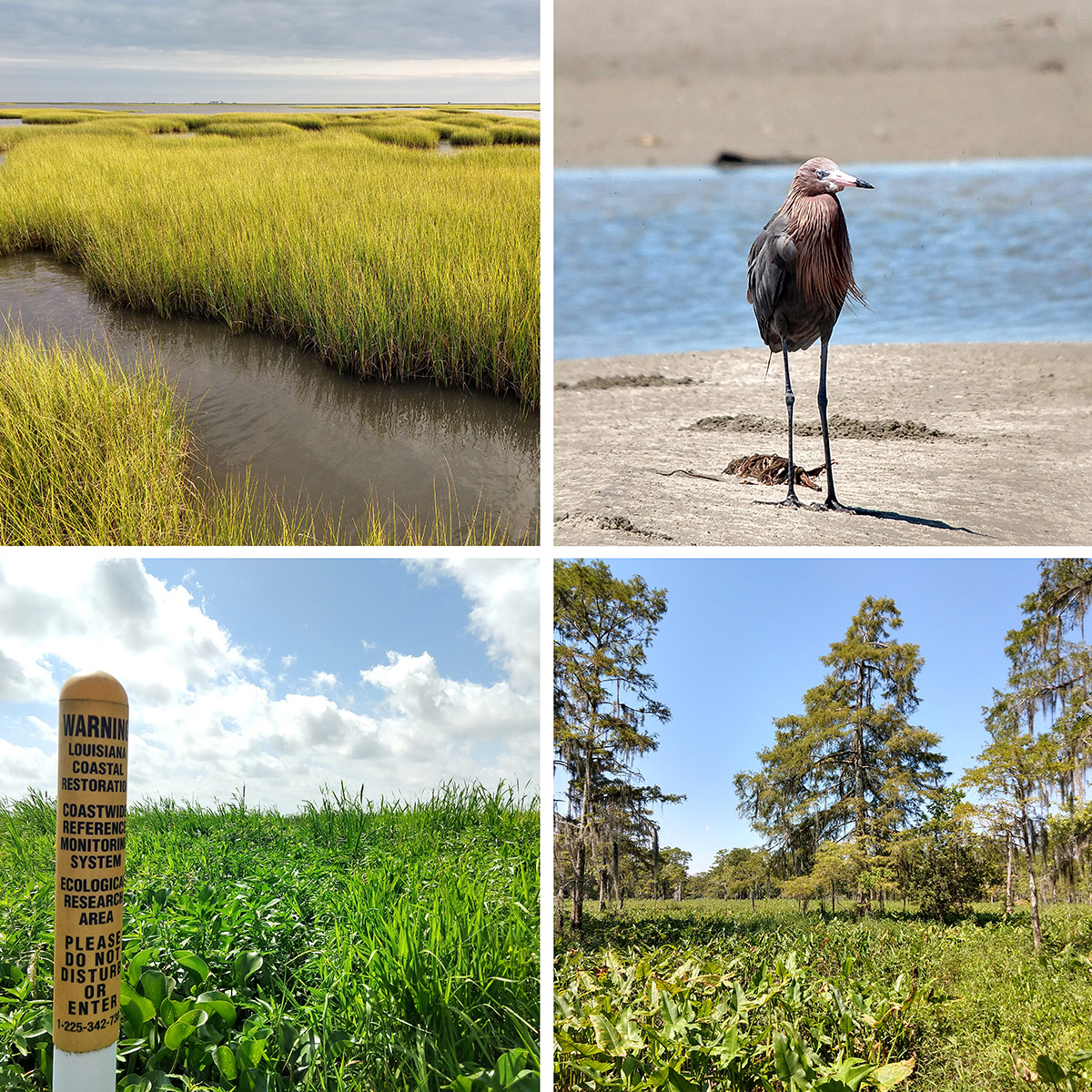 What Rachel Villani might see during a regular work day: Dularge wetlands; a reddish egret on Whiskey Island; a CRMS marker in the Atchafalaya Basin; cypress trees in Maurepas Swamp.

CRMS is funded through CWPPRA, pronounced kwip-ruh, the Coastal Wetlands Planning, Protection, and Restoration Act. The organization is partnered with the US Geological Survey, US Army Corps of Engineers, and Louisiana’s Coastal Protection and Restoration Authority, or CPRA. Some of CRMS’s monitoring sites have had coastal restoration projects, and some will soon. Some are also reference or control sites so that CRMS can tell if a project worked and how well it worked. They have so far gathered 15 years of public data.

“The data allows us to determine how effective our wetland restorations projects are across the coast and to use that information to make good decisions in the future,” Villani says.

Most days, she’s out on an airboat in the Louisiana wetlands, collecting data for CRMS. She also collaborates on additional research projects, often with wetland birds. She also has a bird on her wrist, a tattoo of a swallow-tailed kite.

“I love birds, and this is my favorite,” she says. “Swallow-tailed kites breed in the Atchafalaya Basin and winter in the Amazon, and they need large, contiguous forested wetlands. I like them because I used to do field work in the Atchafalaya Basin in college and seeing these birds overhead was always a highlight of my day. They’re just really pretty and remind me of what we’re working to save.”

To protect the birds and Louisiana’s wetlands, Villani would like to take on a leadership role soon.

“I can’t do fieldwork forever,” Villani says. “It’s hot and requires a lot of physical strength. I’m not ready to make the switch yet, but at some point, I would like to. One of the reasons Homeward Bound was attractive to me is that leadership training is impossible to find; it just doesn’t exist in my realm of the sciences.”

“The name ‘Homeward Bound’ has to do with the planet being our home and us trying to keep it that way,” Villani explains. “It’s simple. We have to do everything we can. If not, our climate will change to the point where we cannot exist anymore.”

Villani found out about the program through friends she met at LSU.

“We met in grad school and then they moved to Australia for a PhD,” she says. “That’s where they met someone else who was in the Homeward Bound program and learned about it. After that, they moved to the Netherlands and it was when I saw them last year that they told me about it. ‘That sounds amazing!’”

Villani applied right away but didn’t get in. So, she applied again. This November, she’ll meet up with the whole group of women in Ushuaia, Argentina to embark for three weeks in Antarctica.

“The name ‘Homeward Bound’ has to do with the planet being our home and us trying to keep it that way,” Villani explains. “It’s simple. We have to do everything we can. If not, our climate will change to the point where we cannot exist anymore.”

Villani continues to raise money through Chuffed in support of her trip.