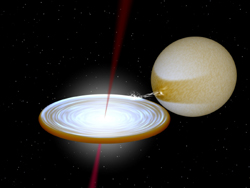 Boyajian's work focuses on measuring the fundamental properties of stars using various techniques such as optical/IR interferometry, spectroscopy, photometry, and asteroseismology. These data are used to calibrate standard stellar models and characterize exoplanetary systems. She is a science team member of the Planet Hunters citizen science group (www.planethunters.org), and namesake of the enigmatic star, KIC 8462852.

Clayton's group is working on understanding the nature of dust in many astrophysical situations and how the dust affects the radiative transfer of energy in galaxies. This work on dust is being applied to many places in our Universe; including Mars, R CrB stars, and distant supernovae.

Hynes is studying the details of black holes and neutron stars in binary systems with the Hubble Space Telescope plus the Chandra and RXTE X-ray satellites, as well as with several ground-based optical observatories. One facet of this work is to probe the instabilities in accretion onto black holes by studying fast variability and correlating variability across X-ray and optical wavelengths. Another aspect is to study multiwavelength spectral energy distributions to investigate the temperature structure of the disk and hence how it is heated.

Landolt's research effort has been concerned with the measurement of stellar brightness and colors, i.e., stellar photometry. His main interest is the improvement and definition of photometric standard stars. These standard stars are used as calibration yardsticks when studying celestial objects, or indeed any objects projected against the celestial sphere, whose characteristics are unknown. Research projects also are under way in the areas of star clusters, variable stars, novae, supernovae, and eclipsing binaries.

Penny works on exoplanet demographics, using wide-field imaging surveys to search for planets via transits and gravitational microlensing. He works on surveys using the wide-field camera DECam on the CTIO Blanco 4m telescope, and MegaCam on the Canada-France-Hawaii telescope, as well as preparing for the microlensing survey that will be carried out by the NASA WFIRST mission.

Schaefer's work is to use the biggest stellar explosions as a tool to measure cosmologically interesting parameters. With Gamma Ray Bursts; star formation rate and the Hubble diagram 0.4<z<6. With supernovae; H0, Ω, and Λ. With recurrent novae; determine the progenitors of Type Ia supernovae.