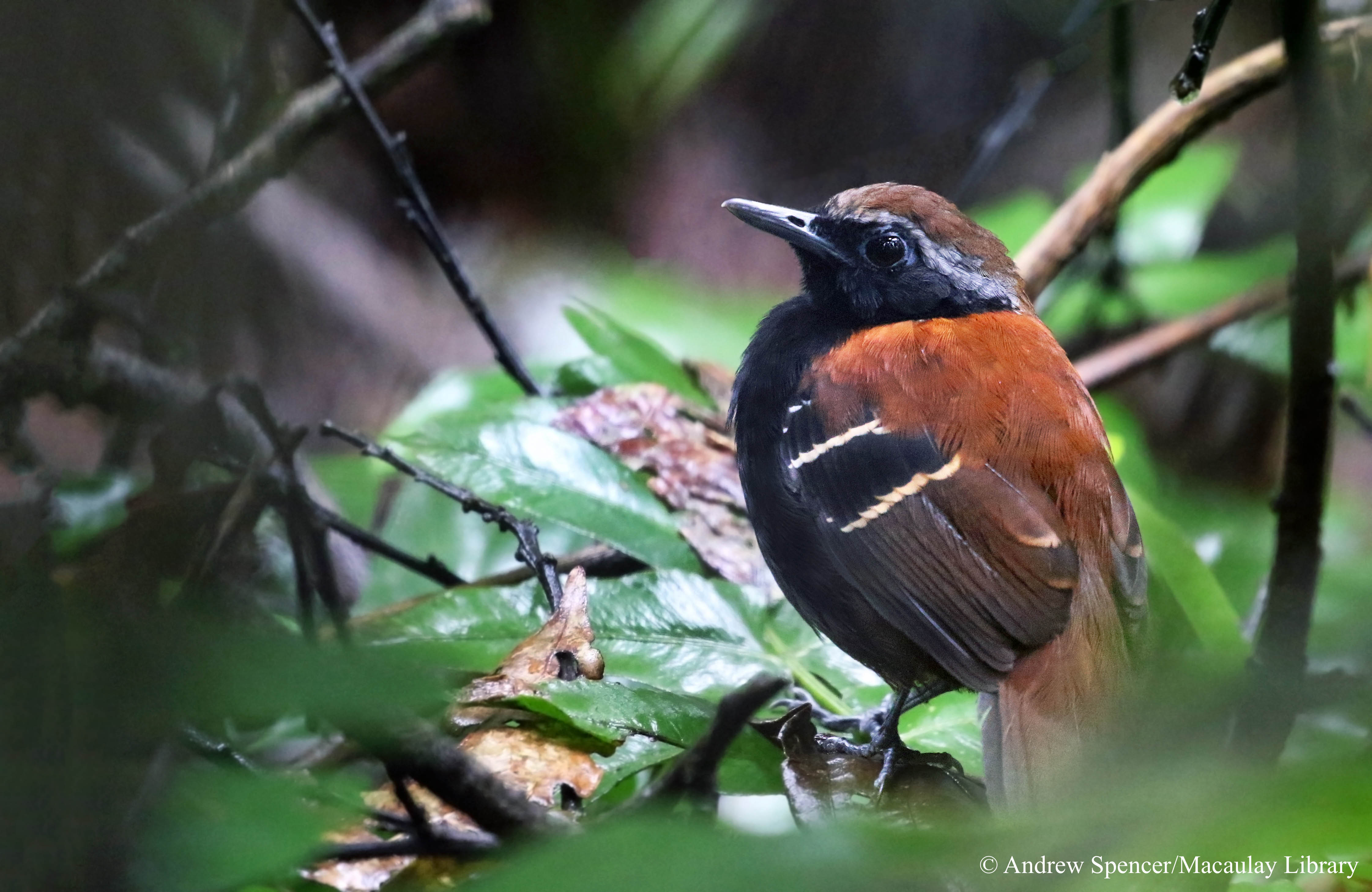 It was July 10, 2016 when Dan Lane, Fernando Angulo, Jesse Fagan, and I rolled into the coffee-growing town of Flor de Café in north-central Peru. This town lies in the Cordillera Azul—a picturesque series of outlying Andean ridges hardly explored by ornithologists. In fact, the first ornithological inventory in the region was only in 1996, when a team of researchers from the Louisiana State University Museum of Natural Science (LSUMNS), bushwhacked into the extremely remote eastern Cordillera Azul. It was on this expedition that Dan, then a beginning graduate student at LSU, discovered the distinctive Scarlet-banded Barbet (Capito wallacei) on “Peak 1538”. Now, twenty years later, we were back to see this iconic species, which graces the cover of the Birds of Peru field guide.

Flor de Café, in the somewhat more accessible western Cordillera Azul, has become the hub for barbet-chasers since LSUMNS associates Todd Mark and Walter Vargas confirmed its presence here in 2011. Thus, we were not surprised to run into another bird watcher, Josh Beck, as we moved our gear into the single guest house in town. Within moments of meeting, Josh began telling us of a strange, ground-walking antbird he had encountered the previous day and documented with a sound recording. We quickly realized that his bird was a species new to science.

Fast-forward a year and a half. Today, December 13, 2017, the Auk has published the formal description of the Cordillera Azul Antbird (Myrmoderus eowilsoni). Based on our initial visit and a follow-up expedition led by LSU graduate student Oscar Johnson, we’ve learned a few things about this new species: its closest relative is the Ferruginous-backed Antbird (of which the nearest populations are about 1,500 km to the east in lowland forests of Brazil), it eats insects, the males and females sing different songs, it lives in pristine understory of humid forest, and its future near Flor de Café is very grim.

Chainsaws were an overwhelming component of the soundscape around town. We even asked some locals to delay cutting activities so that we could get better voice recordings of the antbird. Sun-coffee farming, which necessitates clear-cutting, is the main source of income for the residents of Flor de Café. By contrast, birding ecotourism benefits only a few residents, leading to some unfortunate and ongoing tensions within the town. There is clearly a great need for environmental education and conservation work in the region.

What I haven’t yet mentioned is that Flor de Café is located very near the Cordillera Azul National Park, which was created in 2001 and contains over 13,500 km2 of pristine habitat. We are very optimistic that future exploration within the park will produce new localities for the antbird and barbet, both presently facing severe habitat loss around Flor de Café.

From an ornithological perspective, the Cordillera Azul remains mysterious and tantalizing. Perhaps it holds a new hummingbird or tody-tyrant? Regardless of any future discoveries to be made in the Cordillera Azul, I hope that the new antbird brings attention to the incredibly biodiverse and distinctive avifauna of the region. I also hope that this discovery serves as a potent reminder of how far we still have to go in cataloguing the diversity of life on this planet!