The LSU Museum of Natural Science’s landmark exhibits will help you discover the amazing world of birds, learn about Mike I, observe the similarities and differences of bears, and travel back in time to see an allosaurus. 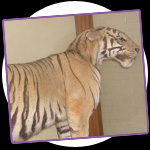 This is the original mascot of LSU, Mike the First. Mike was a legend in his time, “ruling” the campus for over 20 years and living well beyond the average life span of a Bengal Tiger.

When Mike died on June 29, 1956, it was declared “Black Friday” on the LSU Campus. LSU officials scrambled to locate a successor, but in the meantime they decided that a stuffed mascot was better than none at all, so the Museum undertook the task.

This is the legendary Mike who was kidnapped before a football game, cage and all, by Tulane and was returned just before the game with a newly painted green cage. Mike got the last laugh, however, when the highly favored Tulane team barely managed a 14-14 tie with LSU. 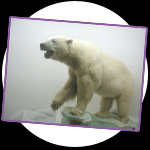 It’s scientific name is Thalarctos maratimus, meaning “sea bear”. Polar bears have hollow hair that is actually clear – it only appears white. Sometimes the coat can look yellowish to greenish white if algae grows inside the hairs.

The skin of the polar bear is the same color as its nose (black), which also heps to absorb heat and keep him warm. They can weigh 600-1,100 pounds and live 30 years in captivity.

Polar bear live in very cold places. Their hollow hairs trap the heat so that they can stay warm. 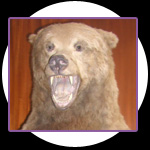 Brown bears are large mammals that live in cool mountain forests, meadows, and river valleys. These solitary bears are found in North America, Europe, and Asia.

Grizzly bears are a type of large brown bear found in the interior of North America. Although they sleep in dens (caves, hollow logs, or holes they dig) during the winter, brown bears are not true hibernators and can be easily awakened. 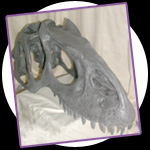 **Located in the lobby of Howe-Russell Hall**

Allosaurus was a predator that walked on two powerful legs, had a strong, S-shaped neck, and had vertebrae that were different from those of other dinosaurs (hence its name).

It had a massive tail, a bulky body, and heavy bones. Its arms were short and had three-fingered hands with sharp claws that were up to 6 inches long. It was up to 38 feet long and 16.5 feet tall. It weighed about 1400 kg. It had a 3 feet long skull with two short brow-horns and bony knobs and ridges above its eyes and on the top of the head. It had large, powerful jaws with long, sharp, serrated teeth 2 to 4 inches long.

Allosaurus was the biggest, most abundant meat-eater during the late Jurassic period in North America, about 154 to 144 million years ago. It may have hunted in group, ambushing even the very large sauropods. It probably also preyed upon large, plant-eating dinosaurs, like stegosaurs and iguanodonts.

Its intelligence (as measured by its relative brain to body weight, or EQ) was high among the dinosaurs.

Allosaurus walked on two muscular legs, its leg length was about 1.38 m; its stride length (distance between footprints) was about 2.72 m.

Allosaurus’ femur (thigh bone) was about 30 inches (77 cm) long. There are still some discussions on whether or not the massive theropods could run very fast or not. Its skull is the most remarkable of all allosaur features. It is an arched and airy feature more reminiscent of a Gothic cathedral than the ponderous armament of an alligator or other living reptilian predator.

In resin (as opposed to rocky fossil material) the cast skull can give a better sense of the lightness of the bony original. The Allosaurus skull appears to have been so delicately constructed, with so many gracefully connected elements, that it seems to have had an unusual propensity for disarticulating during fossilization. Yet for all its lightness, the animal’s remarkably large head was suited to a massive job: parceling prey up into 100-pound bites. Rather like the jaws of a modern snake, the jaws of Allosaurus could expand laterally around large portions of its victim. A flexible joint midway along the lower jaw allowed the bite to be far larger than otherwise possible. The allosaur’s serrated teeth, while much smaller than those of the Tyrannosaurus rex, were just as capable of tearing free large quantities of meat.

The Lowery Hall of Birds 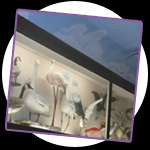 This was the first display area completed for the Museum. In 1986 it was named for George Lowery, the founder of the Museum, who was a renowned ornithologist. This hall features many of the 432 bird species who live in the state of Louisiana for at least part of their lives. In 1952, when this display was being constructed, there were only 378 known species of birds in Louisiana.

At the end of the hall there is a door to the left, labeled “Collections”. Behind this door is where one of the most renowned collections of birds and mammals in world are stored. This is where, as you read this, scientific research is taking place! In the front of the hall is a picture of George Lowery with his birding binoculars.

This exhibit contains many different groups of birds such as the Gulls and Terns, Waterfowl, Owls, Shore Birds, Passerines (Songbirds), Herons and Egrets, Prairie Birds and Raptors. Important birds to notice include the Passenger Pigeons (extinct), Ivory-billed Woodpecker (extinct), Bald Eagle and the Brown Pelican (endangered but current populations are increasing due to interventions).

The Hall of Birds is arranged taxonomically, meaning how related the birds are to one another. It is best to view them in broad groups and point out differences in the beaks and feet.

Similarities between all birds:

A short note about bird mounting: These birds have had their insides and their eyes removed because they would deteriorate over time. The skins are sewn back together and mounted in positions that represent “natural” poses. Eyes are fake. Beaks and feet often have to be painted because they will fade over time and not look real anymore.

MIKE THE TIGER:
A ROARING HISTORY