“I'm so excited for these award-winning journalists,” Professional-in-Residence and Tiger TV Adviser Cindy Carter said. “It means so much to me that all their hard work and dedication is paying off. Awards are great! But it's the quality of journalism behind these awards that makes me so very proud.”

LAB named Kadlubar, who is pursuing a dual degree in broadcast journalism and political science, as the Student Broadcaster of the Year — Television. The Lake Charles, Louisiana native is the assistant station manager at LSU’s student-run media station Tiger TV. Recently, Kadlubar placed in the top 20 for the Television Features Competition of the 2021-2022 Hearst Journalism Awards Program.

Kadlubar said the award is one of the most honorable recognitions she received because it shows that her hard work and reporting are not unnoticeable in the broadcast journalism industry. The recognition also means that her stories have an impact on her community.

“I strive to inspire, inform and motivate my community with every story I cover,” Kadlubar said. “To be recognized by LAB as the TV Student Broadcaster of the Year encourages me to continue growing as a reporter with the next steps I take in my broadcast career." 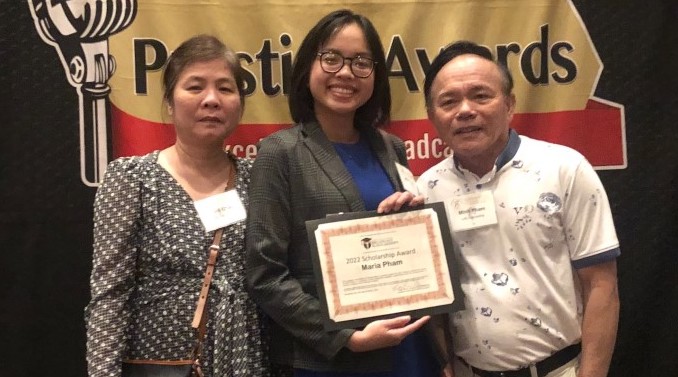 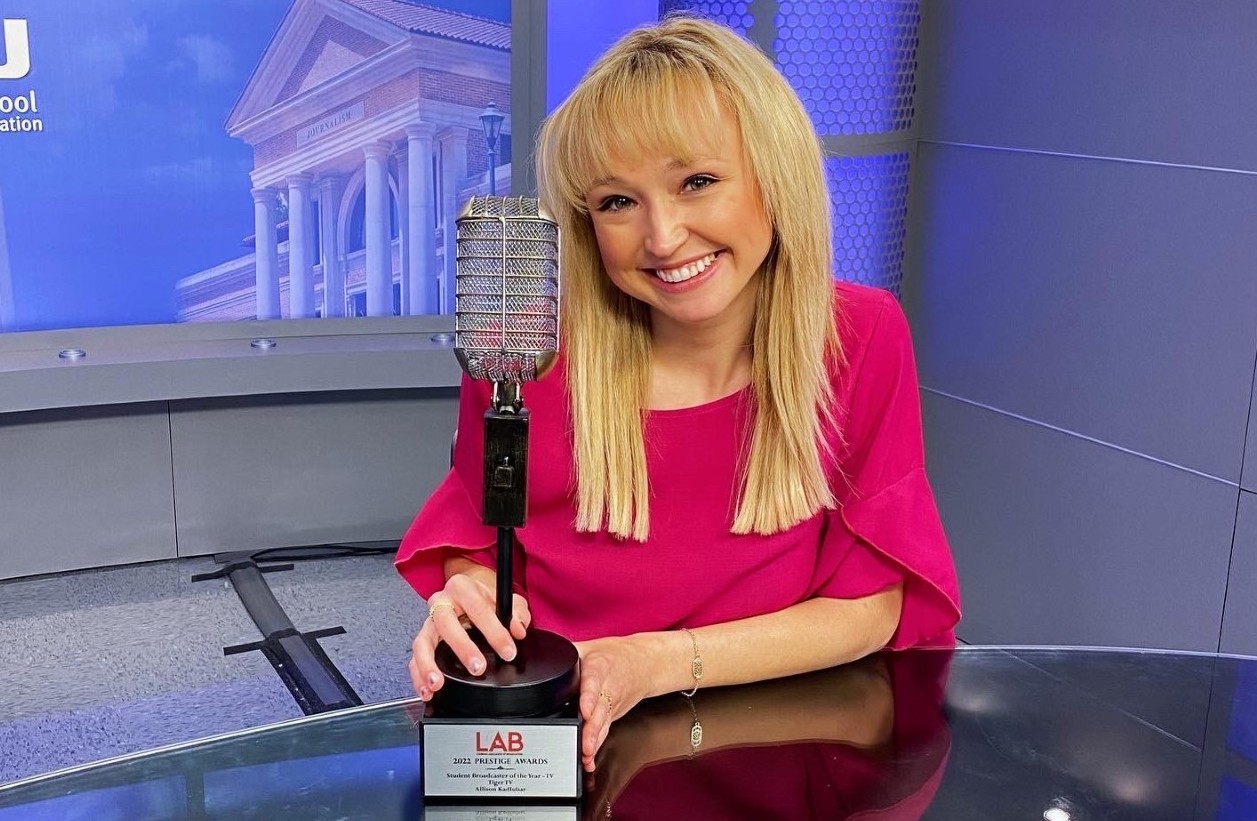 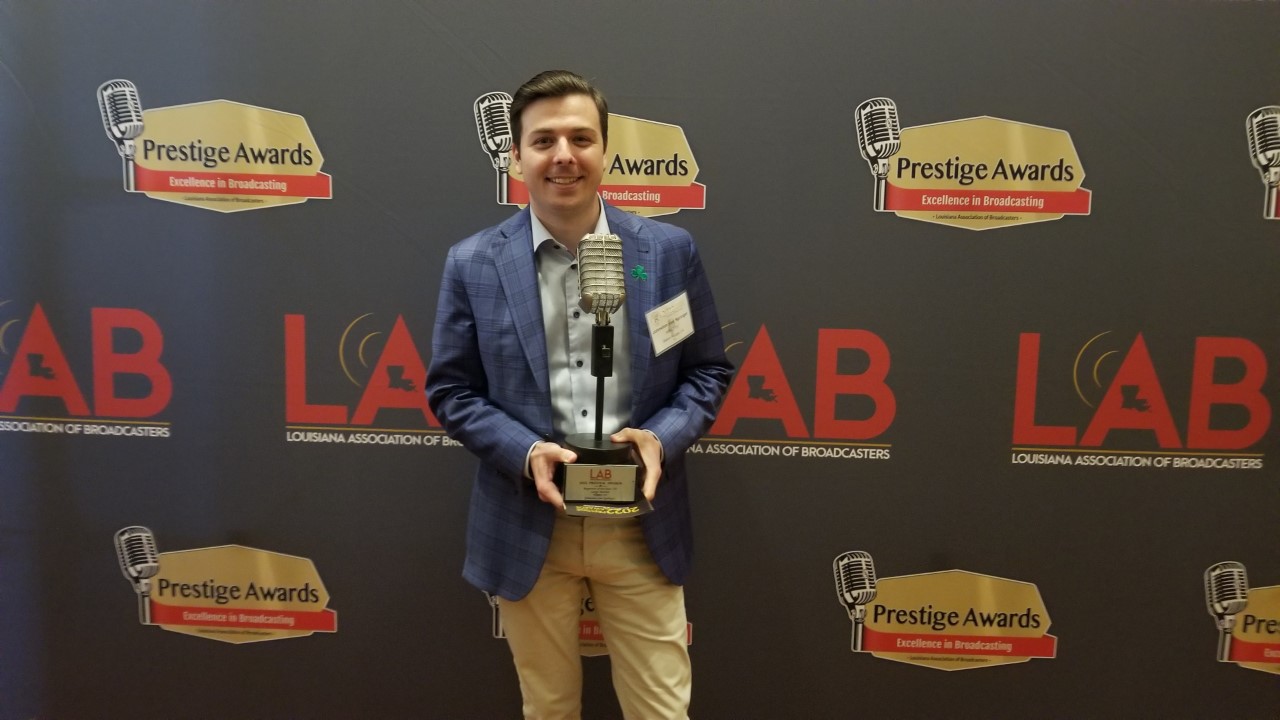 Like Kadlubar, Pham is a broadcast journalism major. The New Iberia, Louisiana native received the LAB Scholarship at the 2022 Prestige Awards. LAB awards the $4,000 scholarship to two promising students at a four-year Louisiana college who plan to pursue a career in the broadcasting industry. Pham is a news reporter at Tiger TV.

The New Iberia, Louisiana native said the scholarship is meaningful because she feared she was late in deciding on the career she wants to pursue. Carter, however, provided Pham with the guidance and practice she needed to grow into the student reporter she is today. Even though the broadcast journalism major believes she still has a lot to learn, the award reminds her that it is never too late to get started.

“I am incredibly grateful to be selected as this year’s LAB Broadcast Scholarship recipient,” Pham said. “This award means a lot to me because it took me until my sophomore year at LSU to find my interest in broadcast journalism. I was scared that I may have found my passion too late, but the Manship School of Mass Communication provided a plethora of opportunities that helped me grow and hone in on my storytelling skills.”

While at the Manship School, the Plano, Texas native was a Tiger TV reporter and anchor.

LAB named alumnus Johnston Von Springer (‘17) as Reporter of the Year — Television in the large market category. Although Von Springer is a part of the communications team at Mary Bird Perkins Cancer Center in Baton Rouge, Louisiana, he was a news reporter at Baton Rouge’s WBRZ-TV for five years.

Humbled by the recognition, Von Springer said it was shocking he won the award because there are a lot of talented reporters in Louisiana. The award proves the hard work and long hours reporters pour into their craft pay off, he said. Von Springer also credits the people, on and off-air, who believed in, pushed and helped him tell compelling, factual and timely stories, as the reason he earned the award.

“Winning awards is never the goal, but being honored alongside so many deserving people certainly means a lot to me,” Von Springer said.

For a list of all 2022 Prestige Award winners, visit: broadcasters.org/prestige-awards/.

The annual awards ceremony recognizes outstanding achievements by Louisiana radio and television broadcasters. The competition was established to encourage the highest standards of reporting, community service and production creativity.

LSU’s Manship School of Mass Communication ranks among the strongest collegiate communication programs in the country, with its robust emphasis on media and public affairs. It offers undergraduate degrees in public relations, journalism, political communication, digital advertising and pre-law, along with four graduate degree programs: Master of Mass Communication, Ph.D. in Media and Public Affairs, Certificate of Strategic Communication and dual MMC/Law degree. Its public relations students were recently ranked the #1 team in the nation, and its digital advertising and student media teams frequently earn national recognition.