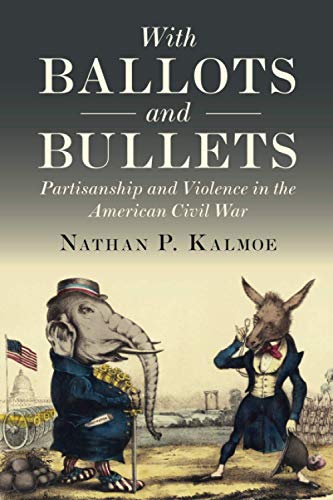 BATON ROUGE—LSU associate professor of political communication Nathan Kalmoe’s book, “With Ballots and Bullets: Partisanship and Violence in the American Civil War,” has won two acclaimed book awards from the International Society of Political Psychology (ISPP) and the American Political Science Association (APSA) for its significant contributions to the fields of political psychology and political science, respectively.

ISPP selected the book as the 2021 co-winner of the David O. Sears Best Book on Mass Politics Award. This honor is bestowed on the best book published in the field of the political psychology of mass politics, including political behavior, political values, political identities and political movements, during the previous calendar year.

Additionally, APSA’s Political Organizations and Parties (POP) division honored Kalmoe’s book with the Leon Epstein Outstanding Book Award, which recognizes a book published in the last two calendar years that made an outstanding contribution to research and scholarship on political organizations and parties.

"I'm especially pleased for this recognition from political parties scholars, in addition to political psychology,” Kalmoe said. “It validates my efforts to write a book that contributes broadly across several areas of the social and political sciences."

"I'm grateful to the Louisiana Board of Regents for supporting this book with an ATLAS grant, which gave me substantial time to finish writing it, and I deeply appreciate all the support that the Manship School and its great faculty, staff and students have provided in making all of this possible,” Kalmoe continued.

Published in July 2020, the book unveils the reciprocal relationship between partisan voting and violence during the Civil War era. Kalmoe fuses history with social science, applying contemporary understandings of mass partisanship and quantitative methods to the historical and political dynamics of the Civil War.

“[‘With Ballots and Bullets’] also informs our modern understanding of partisan behavior in general by showing just how extreme mass politics can be when we look beyond the recent past,” Kalmoe said.

Kalmoe, political communication area head at LSU’s Manship School of Mass Communication, holds a joint appointment in the LSU Department of Political Science. His research hinges on communication, political science, psychology and history. He studies the roots of public opinion and political action as mobilized by communication.

In February, Kalmoe received the LSU Rainmaker Award for Emerging Scholar in the Arts, Humanities, Social & Behavioral Sciences category. One of six LSU faculty members to earn this distinction, Kalmoe has published two books and more than 20 articles. His work has been featured in The Washington Post, New York Times, Vox, Politico, Atlantic, The Guardian and more.

In many ways, Kalmoe says his next book, “Radical American Partisanship: Mapping Violent Hostility, Its Causes, & What It Means for Democracy,” is an ideal follow-up to the Civil War case study in “With Ballots and Bullets.” He and co-author Lilliana Mason measure the level of support for partisan violence today, along with other extreme attitudes, in the book slated for an early 2022 release. They analyze who holds these views, how they have changed from 2017 to 2021, and how messages from political leaders inflame or pacify these views.

Reflecting on the ISPP recognition, Kalmoe said he was especially honored to co-win the award with LaFleur Stephens-Douglass, an assistant professor of politics at Princeton University. The two were part of the same entering graduate class cohort at the University of Michigan in 2005. Kalmoe said her book, “Race to the Bottom: How Racial Appeals Work in American Politics,” is essential reading.