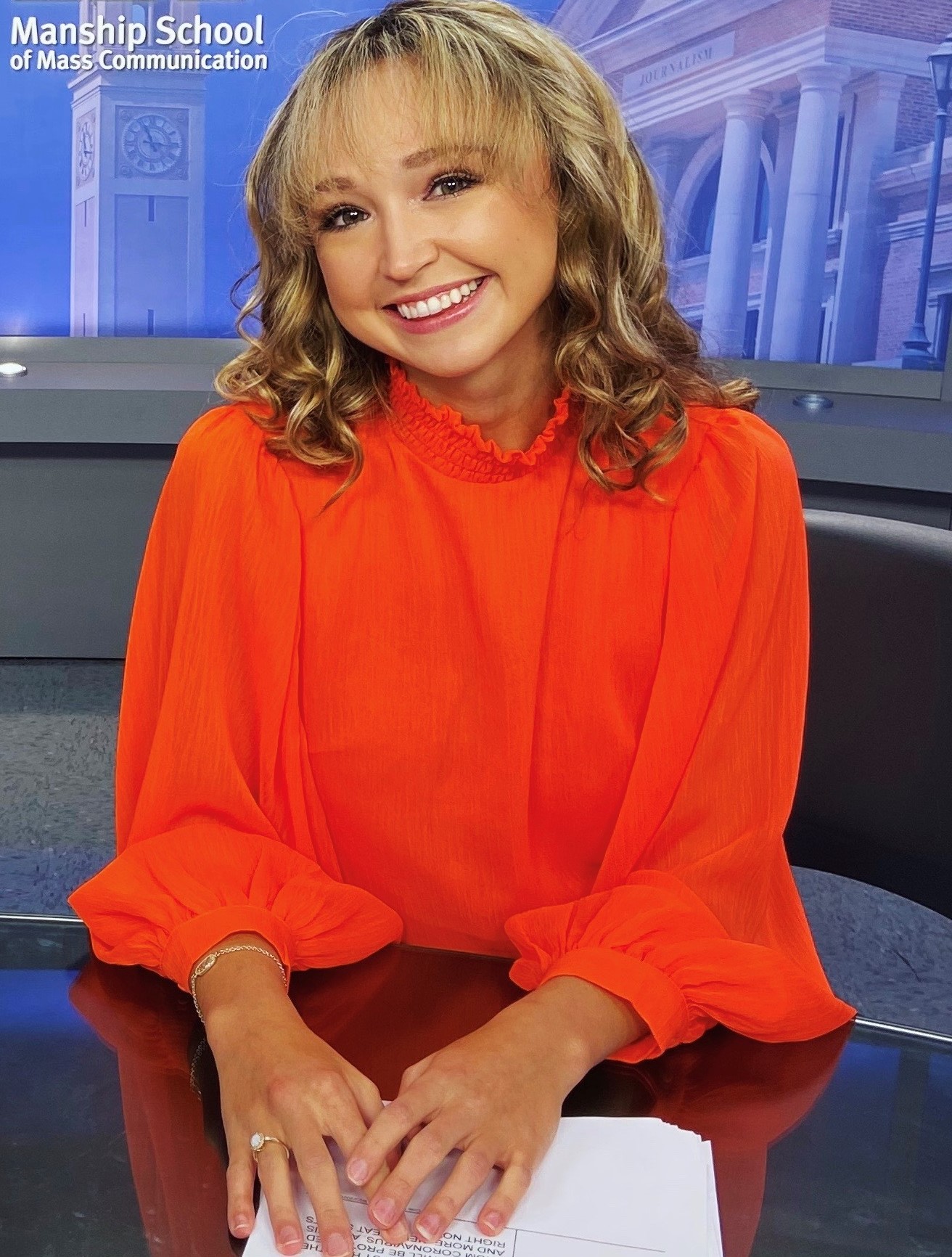 BATON ROUGE—LSU junior Allison Kadlubar is among the top 20 winners of the Television Features Competition of the 2020-2021 Hearst Journalism Awards Program. The Tiger TV assistant news director’s in-depth feature packages tied her for 16th place in a competition where more than 60 journalism programs at universities across the nation participated. Winners were announced Jan. 19.

Kadlubar, who is pursuing a dual degree in broadcast journalism and political science, was recognized for two broadcast reports she completed as a reporter for Tiger TV, the official student-run television station of LSU. Her feature stories highlight the impact of COVID-19 on the casino industry in Lake Charles, Louisiana and the housing market in Baton Rouge, Louisiana.

“I honestly felt honored to be notified as top 20 for this national broadcast journalism award,” Kadlubar said. “I work so hard on every story I report, but I truly have a passion for sharing these stories in a creative, intriguing way. Receiving this award made me feel as though I am following my passion to share the stories that impact my community and investigate the unique ideas that may go unnoticed."

Kadlubar’s story, “Casino Industry Shutters,” highlights how the casino industry in Lake Charles temporarily shut down due to COVID-19 in April 2020 and the impact those shutdowns had on the local economy. After a few weeks of being sent home during the initial months of lockdown, the Lake Charles native saw firsthand the economic impact the pandemic had on the city. Because the casinos in Lake Charles are major economic boosters for the area, Kadlubar investigated how their complete closures were affecting not only their employees but also the entire Lake Charles economy.

“Analyzing the gaming revenue reports and researching how the casino industries' tax dollars aided Lake Charles city projects was a revelation to me that I was excited to share with the entire state,” Kadlubar said.

“It was a fun challenge to communicate interest rates in a way my audience could easily understand,” Kadlubar said. “This story made me excited for reporting after college.”

Professional-in-Residence and Tiger TV Adviser Cindy Carter said that Kadlubar’s leadership in the classroom and the newsroom are evident in the great work she publishes.

"Ally is a bright and amazingly talented young journalist,” Carter said. “In the classroom, she is a dream student who always participates in class discussion, takes notes and embraces constructive feedback on her reports.  As a student reporter and assistant news director in Tiger TV, Ally is a leader who takes everything she learns in the classroom and applies it, not only to her own work but uses that knowledge to mentor her newsroom peers. This recognition is well deserved."

The Hearst Journalism Awards Program was founded in 1960 to support, encourage and assist journalism education at the university level. The program awards scholarships to students for outstanding performance in writing, photojournalism, audio, television and multimedia competitions. Read more about the 2020-2021 Hearst Television Features winners.

LSU Student Media provides media experiences to students through The Reveille newspaper, lsureveille.com and The Reveille mobile app; Tiger TV; KLSU-FM radio; and the Gumbo yearbook. All four outlets are led and staffed by students, supported by professionals, and provide real-world experience for aspiring broadcasters, program directors, writers, editors, photographers and videographers, web producers, designers, and others. Many participating students are pursuing majors through LSU’s Manship School of Mass Communication.